Jenny Lundt ’19: An Eco-Exploration in Colombia

Back to Benton Scholars News and Updates 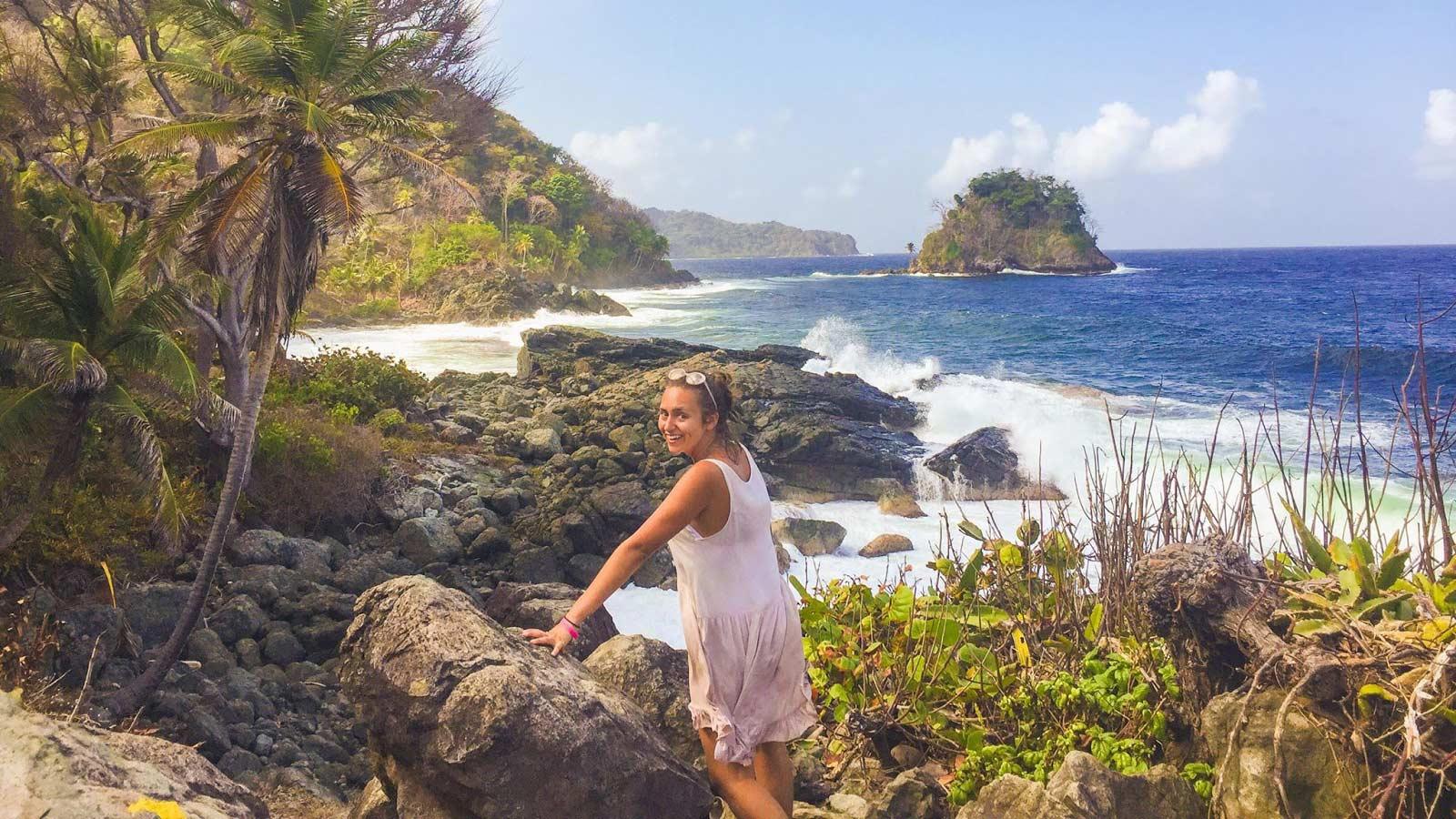 In January 2019, senior Jenny Lundt travelled to Colombia on a quest to build her knowledge about “earthships.” Using a Benton mini-grant she was able to take a deeper dive into the idea of repurposing our waste. Below she details her journey and shares what she learned along the way.

Winter break of my first year as a Colgate student, I traveled to Central America in search of some sun. Along the adventure, I met a British family who invited me to come visit their family in Southern Belize on an “earthship”, an “off the grid” house and property made entirely of recycled materials. I couldn’t believe that what they were describing could actually be possible… so I did what any person would do, of course I went!

I never could have anticipated how wonderful this “earthship” would be. A family with three children living a fully sustainable life on land next to Lubutuum, old Mayan ruins. I was completely enchanted with them and their lifestyle as it was so unfamiliar to the way I lived.

Earthships are houses that meet three very specific criteria; first, they are built sustainably, using materials indigenous to the location they are building as well as recycled materials. Second, the homes rely on naturally received energy sources and are thus fully off “the grid”. Finally, they are financially viable both to create and sustain. 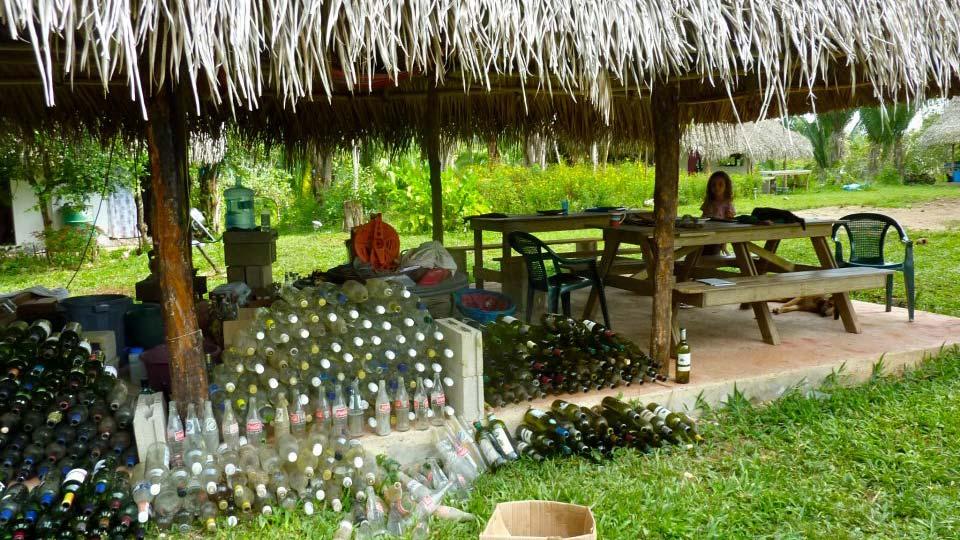 The “Chaos Oasis”, as it is endearingly referred to, is made out of thousands of bottles, cans, tires, packed trash, and cement. People from all over Belize have collected and brought their recycling to the Atkinsons to be used in construction.

This is the only earthship I had ever seen and I have been surprised how many times I have referenced it in the last few years either in class, dinner parties, or conversations with friends. It piqued my curiosity into learning about other earthship movements around the world. Would every family and every house be as lovely as the Atkinson family’s was? I decided that I wanted to learn more. So I started researching earthships and sustainable housing movements. I found that the Southwest and specifically Taos, New Mexico has many different Earthships. I also found movements emerging from South Africa, Spain, the Netherlands, and Belgium.

However, I found a few blog posts referencing the construction of an earthship in one of the most remote places in the world, the Darien Gap in Colombia. I searched and searched for more information, but I couldn’t find a thorough, comprehensive source anywhere. So I did what any person would do… applied for a Benton Mini Grant to explore this movement in Colombia.

On Jan 5, 2019, I celebrated the new year by flying into Cartagena. The first place I went was not an earthship, per se, but they represent another interesting conversation in eco development, Islote de Santa Cruz, the most densely populated island in the world. A population of an estimated 1,200 inhabit an island no larger than two football fields in the middle of the Caribbean Sea. The 45 families have a population density that is four times greater than that of Manhattan.

Besides fishing and seafood, all other food and supplies must be brought in by boat. There is no natural drinking water and thus bottled water is a treasured commodity. The island’s power is supplied by panels of solar panels visible in the lower left corner of the photo above. I got a brief tour of the island. I was amazed at how life passed here just like normal despite there not being much room for anyone. Things like funerals become difficult with no land. But, the locals are making due just fine! 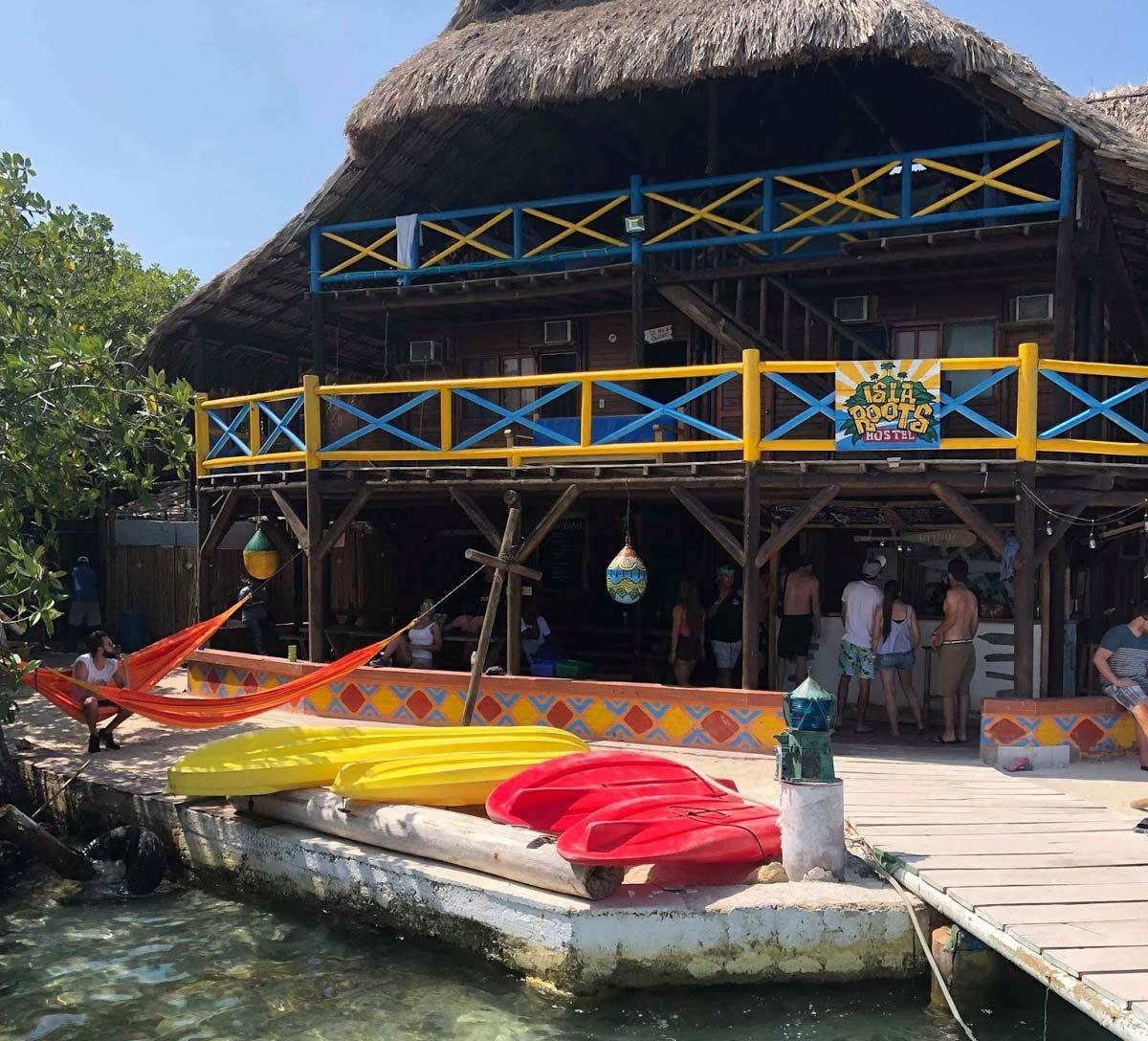 Only a 5 minute boat ride away are “Casa en el Agua” and “Isla Roots”, two eco-accommodations floating by itself in the middle of the water. Both of them are committed to sustainability and have a number of rules and regulations that keep them eco-friendly. They have dry toilets where you #1 in hole #1 and #2 in hole #2. To flush, you use a cup of sawdust lime mix. Every day, they take the mix to nearby Tintipan island where they have a composting process to produce fertilizer. They also have bucket showers that are only available for limited hours in the evening. In the theme of earthships, they reuse the glass bottles the kitchen and the bar for bricks and decoration. With any tin cans, they collect and send them to the mainland to be sold for recycling. It was a very relaxing and interesting few days spent here learning about sustainable practices and tourism.

For the next phase of my trip, I took the long journey to Capurgana in the the Choco region in the famous Darien Gap. The Darien Gap is one of the most isolated regions of the world. To get here, I had to take two long bus rides to the Colombian city of Neococli to take the choppiest boat ride of my life to Capurgana. That feeling of pulling into the harbor, two hours later and seeing a little strip of settlement shrouded by dense jungle as far as the eyes could see.

I have always heard and read stories about the natural power of the Darien Gap… It is infamous for being the only break in the Pan-American Highway, the 19,000 long high way that extends from Northern Canada to Southern Argentina. The Gap is a wide expanse of dense rain forest and has been associated in recent years with drug trafficking and paramilitary groups. I have read many stories about this place, but even knowing all these things could not prepare me for how the Darien Gap actually is. The sound of howler monkeys mixed with the lap of the water in the town will forever stay in my memory.

The blog post that I had found telling me about the earthship in this region didn’t have any information about how to get there. When I started asking around, people didn’t know exactly where or what I was talking about. I was pointed to a bunch of different directions.

Interestingly enough, although this has become a new sustainability fad, many local people have been using trash and other recycled materials to build their structures for dozens of years.

My first stop was Casa de Botellas, which I had not previously heard about. The man, by the name of Carlos, has been working for the last 22 years to take trash out of Capurgana and the ocean.

He told me that the way the ocean currents work, a lot of trash from North America ends up washing ashore in this region. And because there is no “dump” as there is no recycling plant, many locals have decided to kill two birds with one stone by using this trash to construct their homes. This home is particularly well known in the town for his work. 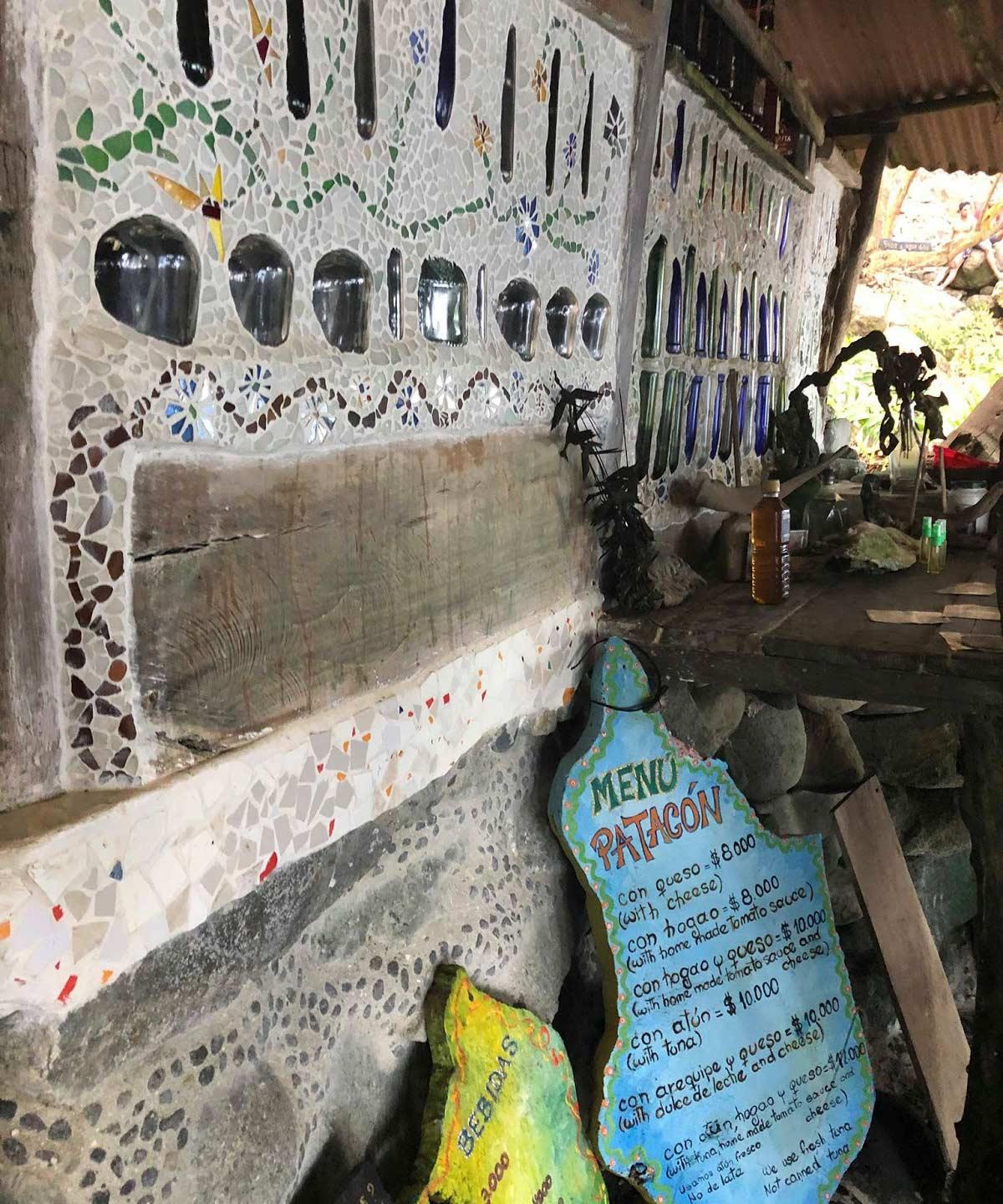 There was another eco house a 30 minute walk North of Capurgana along a cliffside. This house built on natural hot springs is called La Coquerita. I had the opportunity to chat with the man who built the structure and he spoke about the importance of true eco tourism. His house is completely made out of driftwood and bottles. They open up their house to tourists and only serve food on reusable plates.

Walking around the town the next few days, I saw many, many structures that used bottles and other trash. Many houses have used this technique.

I was blessed with a visit from my friend Shirin Vetry who is a Fulbright Scholar in Colombia. Since we went to a wild high school together, I invited her on the journey to find the earthship I had read about online. We weren’t really sure where to begin, as the directions online were extremely, extremely vague. So, we started by taking a choppy boat ride 10 minutes to the closest village to the south. There were only around 10 houses here and the space between them grew further and further as we headed more south. We found two people outside who knew what we were talking about as we tried to explain the concept of an earthship in Spanish. They motioned that we just needed to keep heading south and gave vague instructions about passing a farm and chickens and climbing a few hills. So we did. About an hour later, we found ourselves scaling up a very steep muddy path with not a soul within 20 minutes of this. This gave me quite a panic as I had no idea what sort of animals would be awaiting us in this thick we had just lost ourselves in. I was sad to abort the mission, but safety won out in this case. Shirin was a loyal trooper until the very end. 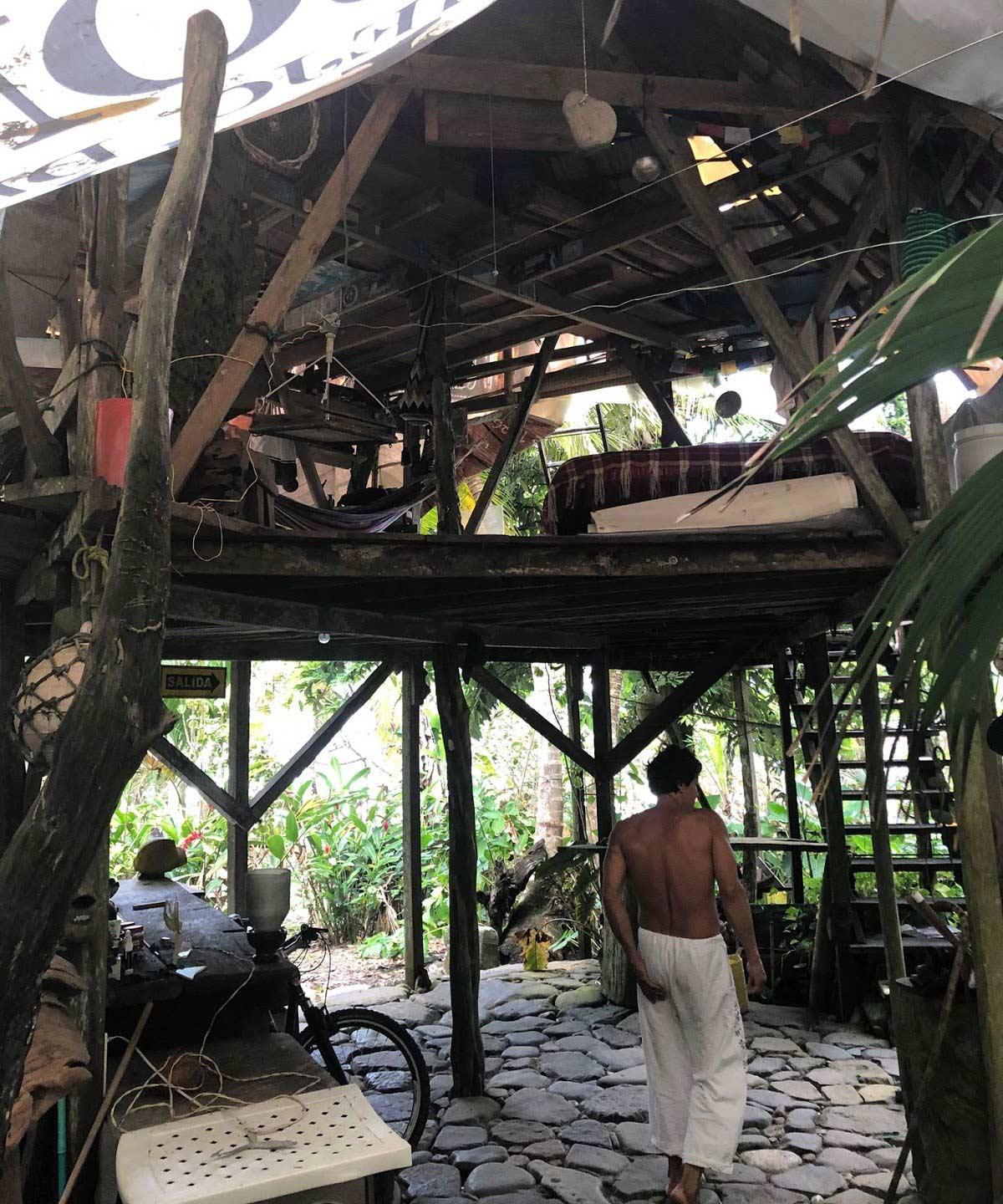 As we were walking back, defeated and muddy, we found a surprise off the beaten path with an inhabitant extremely eager to show us his property. He, again, had used things he had found washed ashore to create this incredible open air structure that could only be called a treehouse. Perched along the water, I could only imagine the peace and serenity he gets from his breezy bedroom atop a tree with a view of the jungle.

We asked him about whether or not he had ever heard of the earthship that supposedly exists near where we were and he said that he heard rumblings of a failed project with a bunch of foreigners with no skills paying absurd amounts of money to do construction work on this house. He says he believes the house collapsed because they were so focused on the experience that they weren’t considering the actual difficulty and high standard necessary to build. I have no idea if this is true or not. A week after leaving, the Colombia earthship finally got back to me saying that they had no wifi while in the jungle and therefore they missed my message asking for an exact location. They also spoke about how hard it is to find without the exact coordinates and a sailor who knows them. I am not sure exactly what the truth is here, but it was certainly interesting to go and explore. If it really does exist, then it is certainly in one of the most rural, inaccessible locations on the entire planet. Pretty cool AND eco friendly!

This eye opening trip has changed the way I have conceptualized waste management. Generally, when we put out our trash, we think of it as out of sight, out of mind. But that is rarely the case and many of the times, our “out of sight” really means just dumping it in another place.

People might be good about recycling, but that is not enough. The other Rs- reduce and reuse are important to attempt before simply throwing it in a bucket. I urge everyone reading this to figure out how the things in your life can be reused. There are a million uses for almost anything and if you are ever throwing away something, Google if you can reuse it first. Especially if you live in a warm climate, mini earthship projects are completely feasible to accomplish.

With my role in SGA, and the looming carbon neutrality in this year, I have thought a lot about sustainability and the direction our planet is heading if we don’t step up and be kinder to the planet. Seeing the trash washed up on the beautiful shores of Capurgana and Choco that potentially originated from us. Say no to single use plastics wherever possible.