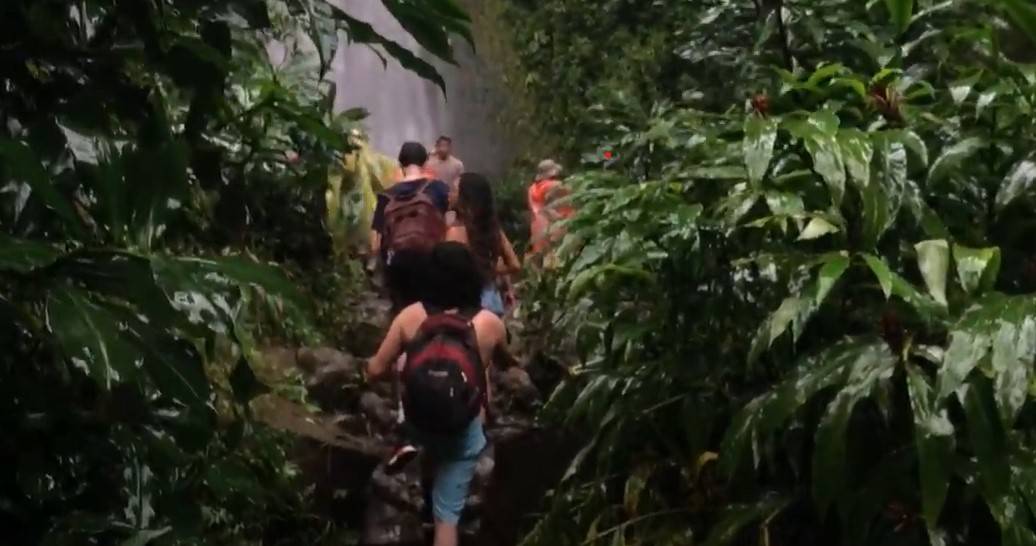 “The sight of the twinkling stars made a strong impression on us and led to discussions of astronomy. We would marvel at the sun as it came slowly toward the horizon and finally appeared in all of its splendor to bathe the Alps in a mystic rose.” -- Maurice Solovine on his relationship with Albert Einstein.

In a serendipitous turn of events, I found myself reading this passage from Walter Isaacson’s Einstein: His Life and Universe on the southern shores of Oahu in Honolulu, Hawaii this past winter break just as the sun was touching the western horizon. Painting not the Alps, but the expanse of the Pacific Ocean with the same “mystic rose” described by Einstein’s life-long friend, the Sun welcomed me to the island as I had made the voyage from Cleveland, Ohio to attend the 235th gathering of the American Astronomical Society (AAS) for their annual winter meeting. A confluence of almost 4,000 professional and amateur astronomers, journalists, companies, observatory representatives, and more gathered to discuss the frontiers of the field of astrophysics, the history of the organization and its members, resources and opportunities for undergraduates, and everything under the Sun and Moon pertaining to astronomy. I found myself amongst the crowd thanks to my reception of an AMS grant, and I sit reflecting on my experience, I could not have thought of a better use of the funds as I prepare for graduate school.

The general structure day-to-day was pretty much the same -- every morning, the conference began with a Plenary Prize presentation. Poster sessions from undergraduates and graduate students followed, then longer oral presentations for individuals in their final stages of their dissertation. Another Plenary Prize was given before breaking out for lunch every day. The next few hours often involved strolling up and down the aisles of the main conference center room, full of booths for graduate schools, organizations, specific telescopes and their operators, companies recruiting recent graduates, and outreach from organizations like NASA and JAXA. During these times, I was able to meet other students, network with future graduate school advisors and colleagues, and get free “swag” like posters and trinkets from the various booths (and a lifetime supply of high-quality pens!). During this first day, I met a group of students who participated in the University of Wyoming Research Experience for Undergraduates who soon became my friends for the rest of the week.

After everyone refueled during these lunch hours, the attendees reconvened for back-to-back Plenary Prize presentations, and the evenings closed out with more PhD student presentations and specific breakout workshops for a multitude of skills needed in astrophysics (more on these later!).

Far and away the most intellectually engaging aspects of the entire conference were the Plenary Prize presentations. These awards are given to individuals truly at the frontiers of astrophysics, often reviewing the ways in which they have impacted the field or made groundbreaking discoveries. Here, I hope to outline what I found particularly fascinating about some of the talks and my general takeaways with four years of astrophysics under my belt:

There were many other Plenary Prizes given out, equally as fascinating, but these three above stand out to me as I read back on my notes judging from how I was frantically copying down notes and remarks from the presenters. In addition to these huge presentations, I sat through several impactful presentations from peers a few years ahead of me in my academic career, giving me a peak at to what my life in graduate school might entail. What stood out to me the most was how captivated the presenters were in their research -- in particular Ivanna Escala from Caltech and Evan Schneider from Princeton. Their work both intrigued me and excited me for what is ahead in my endeavors, and being on the cusp of graduating, my desire to continue on into the field was reignited hearing these two speakers.

Shifting gears from the academics of the conference to the adventures on the island of Oahu, being in Hawaii afforded me the chance to see a paradise I had never dreamed existed. From my first steps off the plane, I was able to explore the beaches of Waikiki and the volcanic vents in and around the island including Diamondhead Crater. Street performers, skateboarders, surfers, and tourists lined the streets, providing a needed break from the intensity and exhausting nature of these conferences. I explored the island with the friends I made from the University of Wyoming, traveling to various nooks and crannies of the island like the tube-waves on the North Shore and the Dole pineapple plantation smack in the middle of the island.

I was enamored by the nature around me -- rainforests merely ten miles from picturesque beaches encompassed by the rich culture and food of the island. Some of my highlights from the trip were getting absolutely poured on while hiking to Minoa Falls and warming myself back up with Hawaiian “loco moco,” a rice-bedded dish of meat, gravy, and eggs. Topping it off with the equivalent of a Hawaiian doughnut called “malasadas,” I couldn’t help but take in everything that surrounded me with each person and place I came across.

Looking back on my time in Honolulu, I can’t help but re-emphasize how transformative the trip was. I captured lots of my time in a series of videos that I will include below, but I hope I was able to convey the excitement, engagement, intellectual stimulation, and pure enjoyment I got from my AMS grant. It’s something that drew me to Colgate in the first place, and I can’t help but think of a better capstone to my academic career as I look to graduation. If you have any questions about the trip, the astronomy community, or what it’s like to attend one of these conferences, feel free to shoot me an email at jpilawa@colgate.edu, and thank you for taking the time to read about my journey.