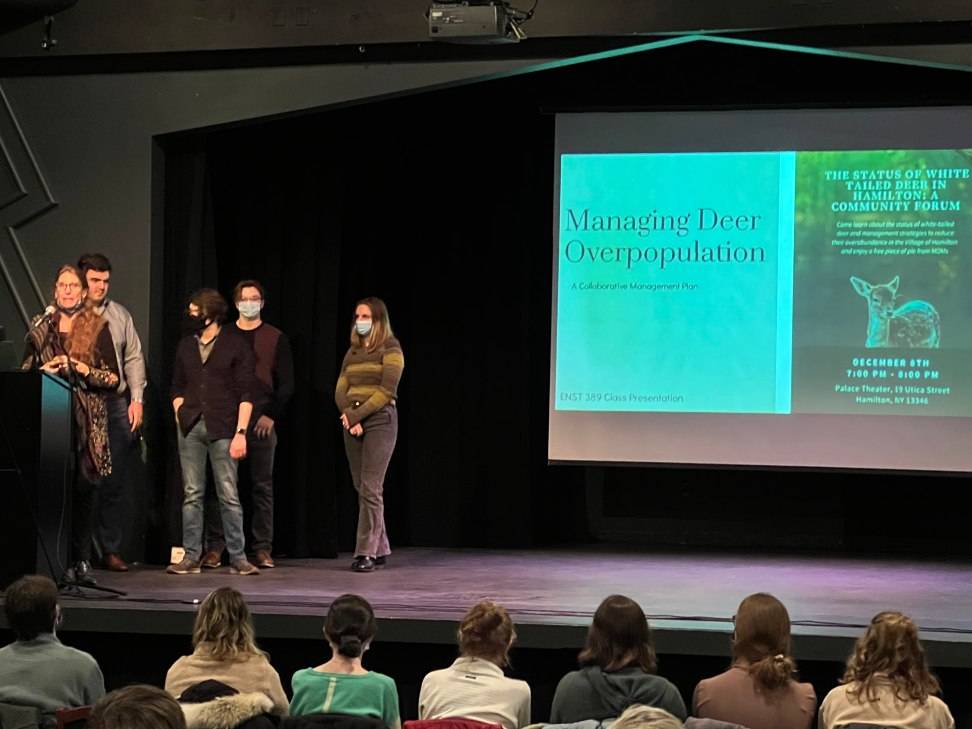 Overabundance of whitetail deer in Madison County is no secret to anyone who has had a close encounter with their vehicle, to homeowners who have had shrubs destroyed, to farmers dealing with crop damage, or to those who have had Lyme disease.

It’s an issue that the Upstate Institute and Colgate students have been closely studying since 2013 as part of community-based environmental studies and biology courses taught by professors Catherine Cardelús, Andrew Pattison, and Ian Helfant. Students in 2013 were tasked with researching whether the area had a deer problem, and the results then and through annual surveys have consistently been, “yes,” says Cardelús.

The issue goes well beyond environmental and economic impacts. “We collect ticks every year around the village and send them to the Thangamani Lab at Upstate Medical University,” says Cardelús. “They analyze our ticks for nine different diseases. We have data that shows 78% of the ticks we collected this year [2021] were positive for Lyme disease.”

One of the greatest losses, says Cardelús, is that the threat of Lyme disease has changed our relationship with the forest. It is an effort to be in nature because of the vigilance and mitigative behaviors needed to minimize tick bites.

Community forums about that research have been held four times since 2013, with the most recent held in early December 2021 at the Palace Theater.

In light of the recent data, the Upstate Institute and environmental studies students in the courses Community-Based Study of Environmental Issues and Conservation Biology and Policy proposed, and the University approved, a short deer cull in early January on University property at the Seven Oaks Golf Course and in the woods around the former Colgate ski hill.

“The local overabundance of deer is an environmental issue that, at its heart, is as much a social issue as an ecological issue,” says Pattison. “Understanding properly what is happening and what we might be able to do as a community requires collecting and analyzing both ecological data and social data. The numbers of people who hunt nationally are declining, and even if they weren’t, hunting alone isn’t enough to keep our local whitetail population at numbers that will stabilize, so a community-based cull is a solution that has the potential to help mitigate ecological impacts and build social and community connections at the same time.”

Colgate researchers plan to continue study of the whitetail in the region, and future public forums will be planned to share the results.