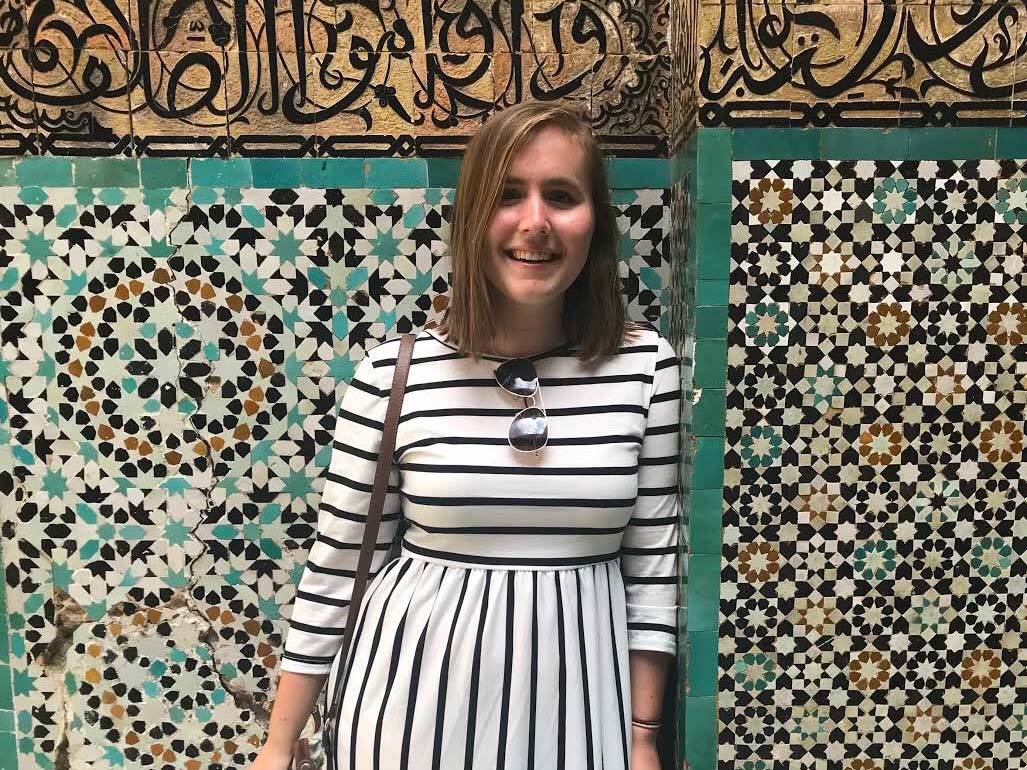 What languages do you speak?

I took French in high school but I don’t take it at Colgate – Arabic’s my primary thing I’m focusing on right now.

I studied French for two years in middle school and then four years in high school, and we weren’t really expected to speak French the whole time in class. Language study definitely wasn’t as intense as it is at Colgate. I did one calendar year of Arabic here and then I also did a program over the summer, so I did two years’ worth of Arabic in one year. I would probably say my Arabic speaking is better than my French ever was, and I had seven years of French versus one of Arabic.

Have you done any interesting research projects at Colgate?

I’m a research assistant for my Arabic professor. He’s working on documents from the Ottoman Empire era, like the reports of a man who was doing recommendations for ways to improve the infrastructure of the Ottoman Empire. His recommendations were fantastic, but the Ottoman Empire didn’t adopt all of them and kind of crumbled. Most of the documents are in English, there’s definitely some sections in Arabic and there’s a little bit in French as well, and I’m mostly doing transcription so that we can get into the research component of the project after the materials have been transcribed. That means looking up the names of the towns that this person visited, trying to track down the people that he mentions, and things like that. It’s definitely going to be a multi-year kind of process.

What professors have you had for Arabic?

I had Professor Abdal-Ghaffar for first year Arabic, and I had him for my Morocco class which was taught in English but included an extended study to Morocco where all the instruction was in Arabic. After I went to Morocco I received the Lampert Summer Language Scholarship from Colgate, and I went to the University of Maryland and did intensive Intermediate Arabic over the summer. This year I have Amany Ahmad for Advanced Arabic. I also work a lot with Ayman, who is the Arabic Language Intern at the Keck Center, and he does a lot with the classes as well.

What was your extended study experience like? How did it contribute to your education at Colgate?

Morocco was really cool. We were kept busy, but we got to see a lot of the country on the very first day. After we landed, we travelled fourteen hours by bus to go to the Muzuka Desert, where we rode camels, saw the sunrise, and danced and sang in Arabic. We were stationed in Rabat and taking classes during the week, but we went to a few different cities – including Chaouen, which was my favorite. It’s called the “Blue City” and it’s beautiful. We went hiking in Akchour, and we went to the cities of Fez and Meknes. We also went to an Amazigh village  – the Amazigh people are the native people of Morocco, and they have their own unique language and culture. Our Arabic language class was with instructors mostly from Egypt because we’re focusing on the Egyptian dialect. There wasn’t enough time to learn the Moroccan dialect of Darija, which is very different from other Arabic dialects. But we did have Moroccan language partners, so they taught us a couple of things to say in Darija Arabic. My favorite is “ana ma diga diga” which means “I’m exhausted.” It’s fun to say and super applicable!

I’m a Middle Eastern and Islamic Studies and Psychological Science double major. Half of my course load is psych requirements, and the other half is Middle Eastern studies. That includes the Arabic language, CORE Middle East, and electives about Islam and regional studies and things like that.

Do you see any crossover between the two fields? Probably Arabic and Middle Eastern and Islamic Studies, but how about Arabic and Psychology?

I’d love to do something with mental health and refugee resettlement in the U.S., and potentially in other countries as well –  I could see myself working somewhere in the Middle East in the future. I would probably want to work with helping refugees get situated in the country – like going to doctor’s appointments, doing translation work, helping to fill out forms, or maybe even doing research. I know that the public school system can be really difficult for refugees since they don’t often speak English. I could see myself going off in that career direction and tying my majors together.

What recommendations would you give to someone who wants to learn Arabic at Colgate?

I think at first it can be scary or intimidating cause you don’t know the alphabet. Looking back, it blows my mind. “One year ago, 365 days, I had no idea what these squiggles meant!” But I stuck with it. The professors are really, really great. It’s such a close-knit department, and you’ll become really good friends with everyone in your class and also with your professors. Your professors will know the Arabic activities you’re involved in outside of class and things like that. They’re super involved and they want to see you succeed, so going to office hours and putting time into actually doing the homework every night is important. It is a lot of daily homework. The class is every day, and sometimes we had homework due Saturday nights, things like that. But the program is really well set-up and the professors are wonderful, so I would recommend to stick with it even though it’s hard and unusual and different. Stick with it and put effort into it. Use your peers – study groups are essential! – and practice the language outside of class.

What impact do you see language study having on the rest of your life?

Career opportunities for sure, but also satisfaction with my college experience. I feel like my experience at Colgate would be way different if I didn’t have my language family here. I definitely think I enjoy my classes so much at Colgate because of Arabic and the close friendships I’ve made, some of which I’m probably going to maintain for the rest of my life. Travel opportunities and future relationships with people already have a big impact on my life. When we were in Morocco, there was a really sweet guy who opened up his pizza shop early because we just needed somewhere to duck in and sit down. All the streets were empty, and he saw us and said, “Oh, I can open up early!” in Arabic. We were like “Oh, you don’t have to,” but as soon as he found out that we spoke a bit of Arabic, he was excited to speak with us in Arabic and English and we sat in his shop and talked. It was an interaction that wouldn’t have happened if we didn’t speak the language, which was pretty cool. The people I met in Morocco were all super encouraging about speaking Arabic. I think people don’t necessarily expect a tourist to the Middle East to know the language, so they get really excited and want to talk to you when you do. Knowing Arabic has definitely opened up many new conversations and relationships.