Back to Upstate Institute News and Announcements
By: Contributing Writer
Share

Submitted by Taylor Dumas ’20, one of 30 students doing community-based research this summer as a Fellow in the Upstate Institute Summer Field School. 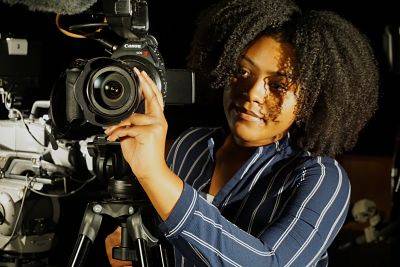 This summer I have worked as a video editing intern at Mountain Lake PBS. Based in Plattsburgh, New York, Mountain Lake PBS services an audience of over 4 million in New York, Vermont, Quebec and Ontario with high-quality digital media content in pursuit of its mission to “inspire and enrich people and communities through meaningful storytelling, entertainment, education and public engagement.” They do so through the production of The Mountain Lake Journal, the station’s weekly newscast, and through well-respected documentaries such as ARTS IN EXILE: Tibetan Treasures in Small Town America and ON HOME GROUND: Life after Service. Although the station has a reach spanning across a wide area, its primary audience is composed of those living in what is referred to as the North Country region of New York.

Since 2018, the production team at Mountain Lake PBS has been working on a documentary about racism in the North Country. Through the Upstate Institute, I was afforded the opportunity to work directly with Associate Producer Michael Hansen, who, in addition to spearheading this documentary, recently won a New England Regional Emmy for his piece A Vietnam Vet’s Love of Photography. Thematically, this documentary covers a wide range of topics including local and national histories of race relations and racism, personal experiences of racism, the U.S. prison system, and the relationship between race and space. The goal of this documentary is to dispel notions that racism is a thing of the past and to shed light on its persistence in our own backyards. To do so, the documentary contrasts the beauty of the Adirondacks with the ugliness of the racism that remains present in many facets.

Since the start of production, Mr. Hansen has conducted over a dozen multi-hour interviews with historians, artists, activists, and students who have studied or personally experienced racism in the Adirondacks. Given the scale of this project, a great deal of work is needed to transform the hours of interview footage and b-roll into a polished and compelling documentary. As such, the task that occupied the majority of my time at Mountain Lake PBS was to edit these interviews and combine the multitude of individual voices into captivating thematic sections. In order to complete my editing duties, I learned Adobe Premiere Pro, a nonlinear video editing program that is used by many professional filmmakers. While occasionally receiving guidance and feedback on my work, I was granted a considerable amount of freedom to make creative decisions in regards to the content and style of my edits. This freedom allowed me a great deal of room to improve my skills as an editor while simultaneously building my confidence as a storyteller. In addition to editing, I was able to gain invaluable experience in the various aspects of the production process by going on shoots, conducting interviews, operating professional video cameras, and learning technical skills such as how to light a subject. Furthermore, I was able to connect with people working across numerous departments, including production, marketing, and underwriting.

As a Peace and Conflict Studies major and an intended Film and Media and African Studies double-minor, working on this documentary amalgamated my interests in ways I could not have conceived. Coming into this summer, it was my hope to gain professional work experience in video production and to figure out if this is a path that I would like to pursue after graduation. Since taking a TV production class in high school, media production has always been something that I enjoy as a hobby but never truly considered it as a viable career path. However, my time at Mountain Lake PBS has shown me the range of possibilities within this field, but also helped me develop some of the skills that will be integral to my success in this field in the immediate future.

I am very fortunate for this to have been my second time working as a Field School Fellow. Working as a Fellow at the Mohawk Valley Resource Center for Refugees (MVRCR) in Utica, NY during the summer of 2017 exposed me to the beauty of the Upstate region and to the important work being done by nonprofits like the MVRCR. After learning about the opportunity to again serve as a Field School Fellow in the Adirondacks with Mountain Lake PBS, I knew I could not pass up the chance. Thanks to the Upstate Institute, I have been able to do meaningful work with two not-for-profit community organizations that I had not even known existed. Not only have these two experiences increased my connection to the Upstate region, but it has also taught me that one does not need to look far in order to make a difference. I will be forever grateful for the experiences and memories that I have gained through this fellowship!