Kenneth Hartman discusses prison reform and “the other death penalty”

Back to Upstate Institute News and Announcements
By: Contributing Writer
Share

The Upstate Institute partnered with Hamilton College to bring author Kenneth E. Hartman to Colgate on Tuesday, November 5, 2019. Hartman served 38 years of a life without the possibility of parole sentence in the California State prison system before being released in 2017. Hartman discussed his time in prison to a full audience in Persson Auditorium, and described his activism in working to abolish the sentence of life without the possibility of parole (LWOP). LWOP is effectively, in Hartman’s words, “the other death penalty” sentence, without any of the legal or administrative safeguards rightly awarded to those condemned to the traditional forms of execution. LWOP exposes our society’s concealed beliefs that redemption and personal transformation are not possible for all human beings, and that it is reasonable and just to forever define an individual by his worst act. Life without the possibility of parole is wrong and should be abolished. 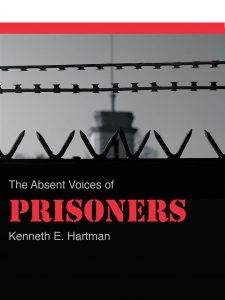 Hartman also discussed the importance of including prisoner voices in the prison reform process. Hartman argued that many of the ideas surrounding prison reform inevitably fail because they come out of a fundamental misunderstanding of the realities of prison. In his experience, prisoners are barred from participating in the conception and management of almost all prison programs, even though their voices have the ability to inform the conversation about reform in unique ways.

Hartman is the author of the award-winning memoir “Mother California: A Story of Redemption Behind Bars.” He has been published in Harper’s magazine, the New York Times, and in numerous other magazines and newspapers, mostly writing about the experience of serving time in prison. Ken is also the founder of The Other Death Penalty Project, works for a nonprofit that helps reentering formerly incarcerated people find housing, and is actively involved in the broad struggle to reform the criminal justice system. Since his release from prison, Ken has spoken at colleges and universities, moderated panels at criminal justice conventions, completed an internationally accredited Life Coach program, and continued to write. He now lives in the Los Angeles area.

This event was presented in partnership with Hamilton College and the Mohawk Consortium College in Prison program, and sponsored by the Office of the Dean of the Faculty, CORE 152 and Peace and Conflict Studies.