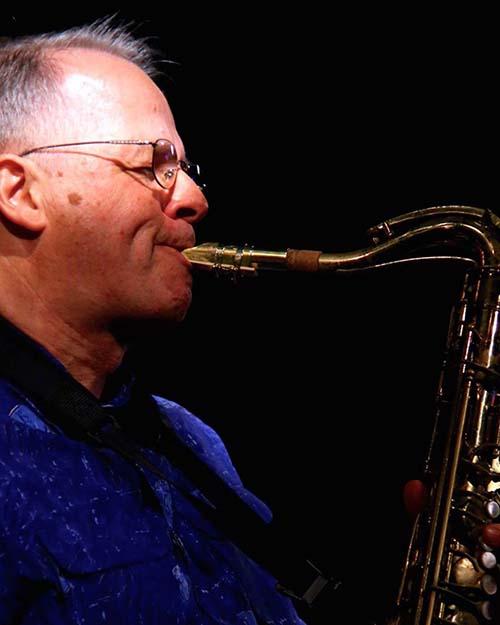 Glenn Cashman is bi-coastal, dividing his time between Colgate University and Southern California. A visible presence on the SoCal jazz scene, the saxophonist/composer leads a nonet, big band, quartet, and as an organist, fronts a trio. “I’ve Got Your Rhythm” his first CD as a leader, placed him in the company of jazz luminaries Kenny Barron, Ray Drummond and Ben Riley. As tenor saxophonist with Luther Hughes & the Cannonball-Coltrane Project, Cashman performed on/composed for the group’s four highly touted CD projects. LA Pianist Tom Ranier and Glenn collaborated on an intimate duo CD, “Blue In Green” and co-led an engaging sextet project “Bright Idea,” also showcasing Bob McChesney, Bob Sheppard, Luther Hughes and Kendall Kay. From 2005-17, Glenn served as Founding Artistic Director of the Muckenthaler Jazz Festival, a six-event summer series held in Fullerton, CA.

Glenn Cashman & the Southland Big Band resemble not so much the historic ensembles listed above, but rather a group in which the composer made a point of writing for his individual soloists and giving them space to play; a band such as, say, Duke Ellington’s orchestra. Is there a higher compliment than that comparison?...
- William Ruhlmann, JAZZTIMES

Cashman's Southland Nonet is a world-class ensemble producing the kind of music that no borders will hold. Melodic, catchy, hot and scintillating, Music Without Borders is bound to resonate around the globe.
- Edward Blanco, ALL ABOUT JAZZ.COM

Cashman starts his Trane Remembered with a muscular soliloquy that sets the mood for a lovely ballad. Infused with a blues connotation, the piece highlights the tenor saxophonist's Trane influence. Deep, mesmerizing strings of linked phrases flow from the horn with fluid ease.
- Jim Santella, ALL ABOUT JAZZ.COM

Selected recordings as a sideman: