This week on campus: juggling, sustainability, and SPW 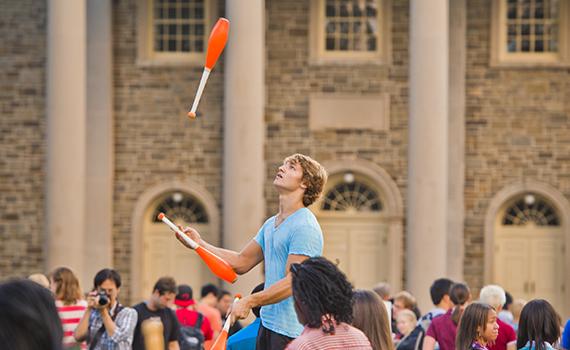 The juggling club will be turning up their act on Tuesday, adding knives and torches to their repertoire. Photo by Andy Daddio

As the semester winds down, plenty of activity still keeps campus buzzing. Here are the events you won’t want to miss this week

Also on Wednesday, Daniel Wilkinson will give a talk titled “Against All Odds: The Struggle for Human Rights in Latin America” in Persson Auditorium at 4:30 p.m. The managing director of the Americas Division of the Human Rights Watch, Wilkinson is an expert on Latin America. He has conducted fieldwork and advocacy throughout the region, and authored reports on human rights issues in Brazil, Colombia, Cuba, Mexico, the United States, and Venezuela. His book Silence on the Mountain: Stories of Terror, Betrayal, and Forgetting in Guatemala won the PEN/Albrand Award for nonfiction.

To see more events on campus and in the community, check out the Colgate calendar.