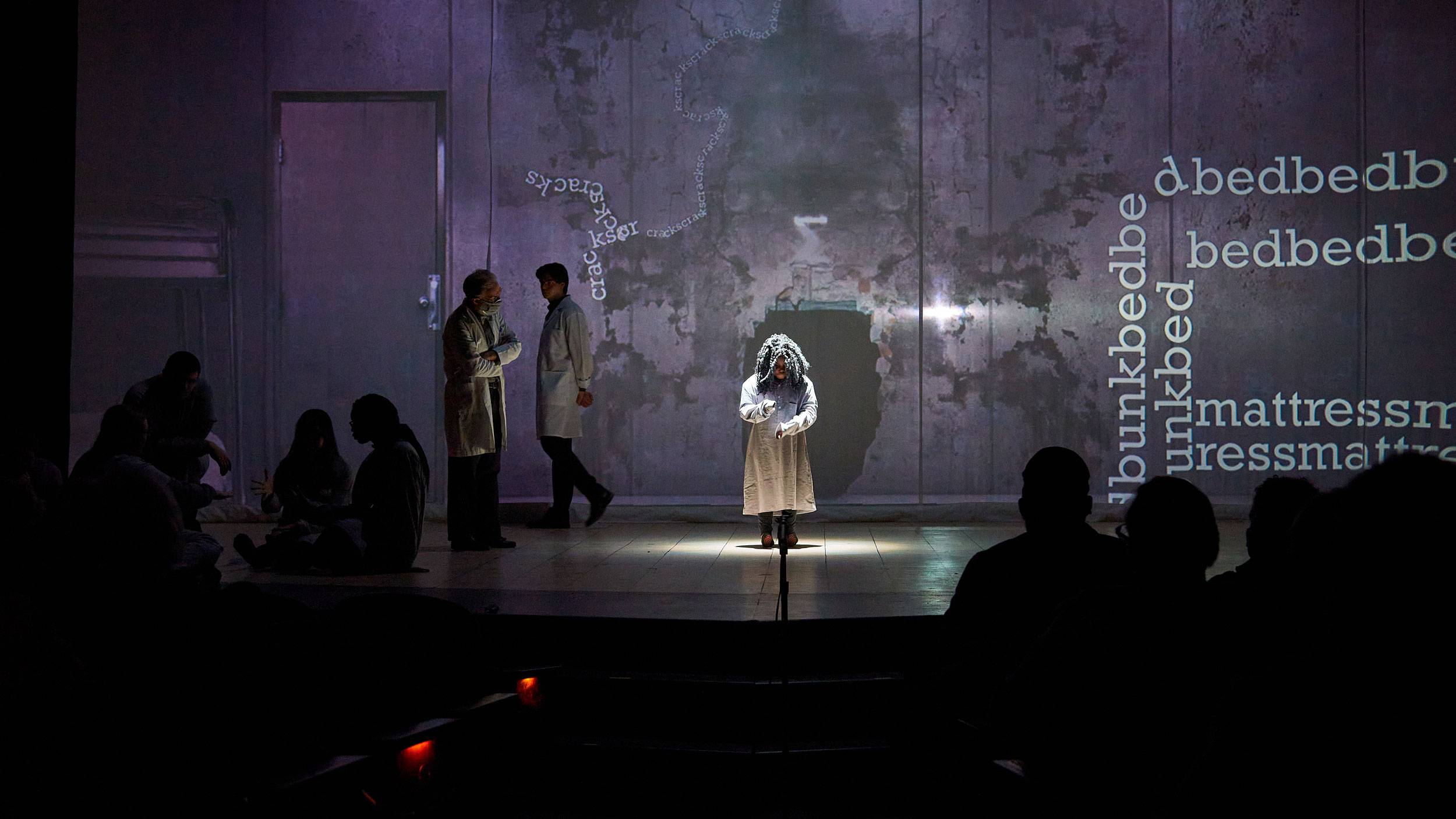 Performance of the play Kinderkrankenhaus at the Brehmer Theater. (Photo by Andrew Daddio)

How do we communicate and express the obscured concepts of everyday life, such as love and friendship? Students of professors Regina Conti, Taryn Jordyn, and Ashley Taylor set out to answer this question, among others, with the spring University Theater production of Kinderkrankenhaus on Feb. 12.

The plot is based on the true story of Nazi hospitals that euthanized children under the justification that they were “unworthy of life” — people with epilepsy, birth defects, hearing or vision loss, mental illnesses, personality disorders, and developmental delays. Hitler viewed them as “marginal human beings” who had to make a case for their own survival, and therefore were put in inhumane mental hospitals until they proved themselves fit for society, or until the regime could execute them. The children of Kinderkrankenhaus — translating to “children suffering house” — gather inside the gray-walled hospital to form unlikely friendships and work toward a better future together.

The play invites the audience to reevaluate their relationship with communication — and, furthermore, their stance on issues of inclusion and anti-ableism. It deals largely with the intersections between neurodivergent language barriers, deficiency paradigms, and philosopher Jacques Derrida’s deconstructionism theory.

Neurodiversity recognizes the unique differences between individual brain functions. These differences often affect senses, learning processes, and communication. Deficiency paradigms, in this context, suggest that individuals make up for a lack of social interpersonal relationships by fixating on niche subjects. Lastly, the play explores theories published by Derrida, who coined the term “deconstruction;” he argued that people of Western cultures often think and communicate their thoughts in terms of a strict binary.

“Kinderkrankenhaus explores neurodiversity, the pathologizing of difference, and the complexity of labels in a world where the unspeaking are seen as unthinking,” explains Jesi Bender Buell, who wrote and published the play in 2021 through Sagging Meniscus Press.

The experimental play was staged in Brehmer Theater by professional guest artists, students, alumni, and community members, with most of the main roles performed by actors who are autistic. People with autism “have a really difficult time finding employment,” Bender says, “so one of my biggest goals was that if we’re having actors, I want them to be paid.”

Through her play, Bender comments upon how confusing language is and how reliant we are on the assumptions that others understand our words in the same way we do.

“At the heart of language’s malleability is the understanding that all brains operate in their own unique way, and the perspectives that autistic and other neurodiverse actors bring to these roles are invaluable,” Bender says.