Uniting Sound, Silence, and the Screen: Voices of Light / The Passion of Joan of Arc Shines 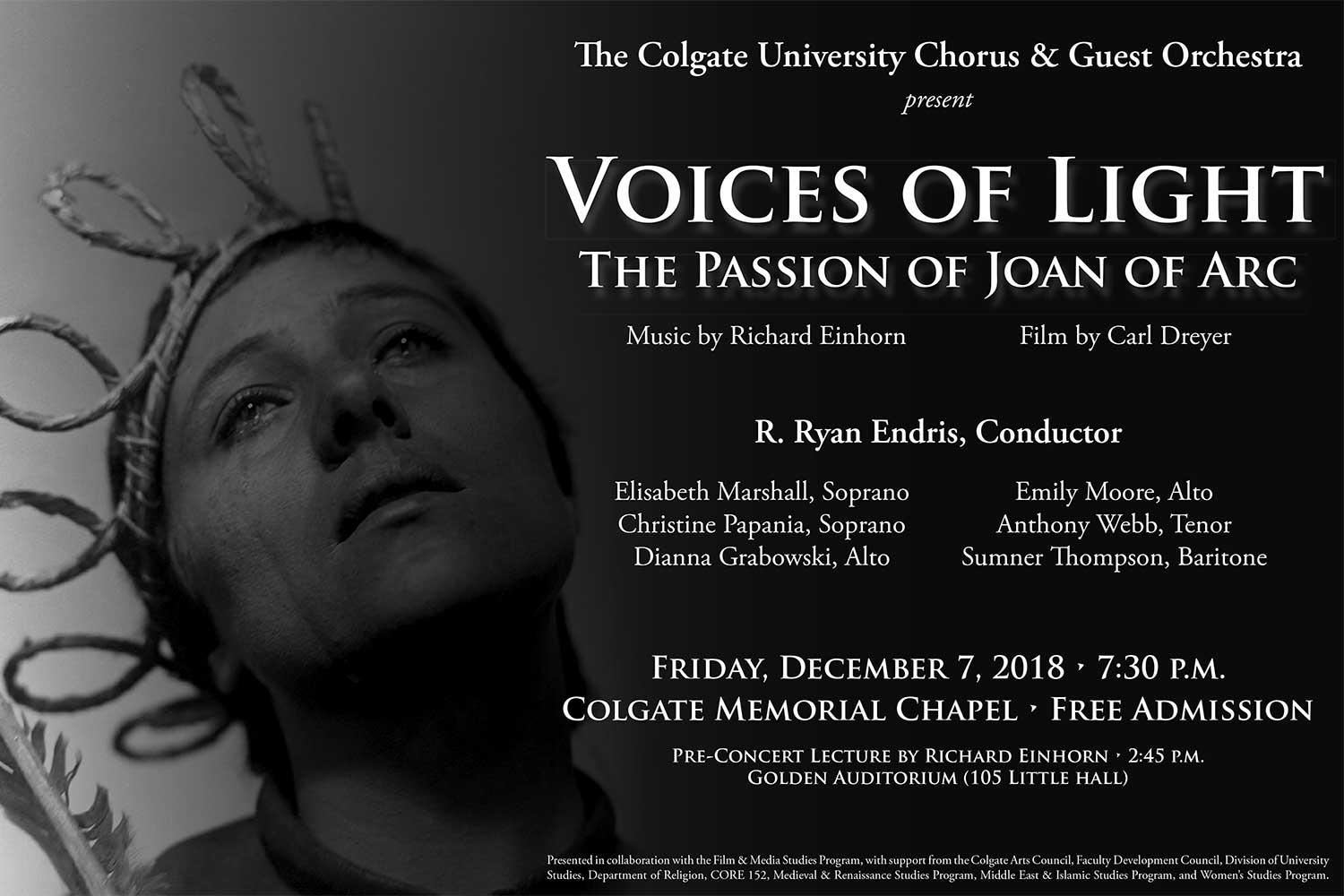 The Memorial Chapel lights dim and a film begins to play. On screen, cloaked clergymen scream silently at a wide-eyed Joan of Arc as she bravely faces their accusations of heresy. On stage, the Colgate University Chorus, accompanied by a visiting orchestra — 127 musicians — bring color to the haunting black and white scenes.

On Friday, December 7, Director of Choral and Vocal Activities Ryan Endris conducted composer Richard Einhorn’s masterful creation, Voices of Light, an opera/oratio inspired by and performed in conjunction with Carl Theodor Dreyer’s 1928 silent film The Passion of Joan of Arc.

With more than 250 performances worldwide so far, Einhorn’s multimedia event has sold out the likes of the Sydney Opera House, the Avery Fisher Hall at the Lincoln Center, and the Kennedy Center.

Colgate’s performance featured more than 90 members of the University Chorus, who intoned the writings of medieval female mystics Christine de Pizan, Hildegard von Bingen, and others while Joan faced her impending death on screen.

Endris typically focuses solely on the music. This unusual event required him to study the film itself and fill his score with visual cues.

“In a sense, it had to become muscle memory,” Endris said. “I had to watch the film carefully while also making sure all the performers knew when to enter and maintaining the right dynamics. It might have been the most mentally challenging conducting experience I’ve had to date.”

Justine Hu ’21, one of the more than 600 audience members, attended a lecture by Einhorn earlier in the day and felt that his process and explanations allowed her to appreciate fully the complexity of the performance.

“I was very impressed by the torture scene, particularly the intensity of the choir in contrast with the soloists,” Hu said. “The juxtaposition of the old film with the university choir, orchestra, and soloists created an extremely layered and enjoyable experience.”

While at Columbia University for a music degree in 1975, composer Richard Einhorn spent much of his time in the Electronic Music Center, working with the first real digital synthesizer. The technology was revolutionary for the time, and allowed him to pursue his passion for digital recording. His dedication paid off when he was asked to score his first movie: Shock Waves.

“This masterpiece is the world’s first underwater Nazi zombie movie. You laugh, but there is actually more than one,” Einhorn said. He added that, while an amusing subject matter, Shock Waves had one of the first all-electronic scores for film.

Einhorn went on to compose for other films as well as several PBS programs. He wrote successful concert music, including a piece that was adapted by the New York City Ballet, and he produced pieces for some of his idols, including Yo-Yo Ma. Their Bach Cello Suites won a Grammy for Best Instrumental Performance.

After spending time in communist Czechoslovakia, Einhorn was drawn to the ways in which people converted to Catholicism as a way of opposing the government. Once back in the states, he found people’s reluctance to discuss religion striking.

The complicated nature of religion left him wanting to produce a big piece. Einhorn found Dreyer’s The Passion of Joan of Arc in the Museum of Modern Art’s film archives and knew it was ideal.

He read thousands of pages on Joan of Arc and the writings of female mystics of the time to compose the piece, and, after six years, Voices of Light premiered at the Academy of Music in Northampton, Mass. Just weeks later, Einhorn had a record contract with Sony and a national tour in the works.

Released in 1927, The Passion of Joan of Arc was the most expensive film ever produced. It chronicles the heresy trial and subsequent execution of the famous French teen, who claimed that divine inspiration caused her to take up arms against the English and lead her countrymen to victory at Orleans.

Joan of Arc had only been canonized as a Catholic saint in 1920, making Dreyer’s subject matter somewhat provocative.

The surprisingly modern film is shot from unusual angles, features a naturalist look with no actors in makeup, and stars renowned stage actress Renée Falconetti — who had a mental breakdown on set after being forced to shave her head in the movie’s final scenes.

Just as the film ends in flames with Joan’s burning at the stake, fires marred the movie’s history in unlikely ways. Several months after the its release, all known prints were destroyed in a warehouse fire. Dreyer, being obsessive, had shot more than 40 takes of each scene, and he managed to reconstruct a new version from the outtakes. Shockingly, the highly flammable nitrate stock of this second version was also destroyed in a warehouse fire not long after its release.

Like its subject, The Passion of Joan of Arc has its own compelling story, full of drama and fire.

Decades later, in 1981, staff at a mental institution in Oslo, Norway, discovered cans of old film in a janitor’s closet. They shipped the film to the Danish Film Archive where, three years later, archivists opened the cans and discovered that they contained the original version of The Passion of Joan of Arc — in perfect condition. No one knows how the cans ended up in Norway, but this version was restored and ultimately used for Einhorn’s Voices of Light.

Like its subject, The Passion of Joan of Arc has its own compelling story, full of drama and fire. Paired with Voices of Light, the production allowed Colgate students and faculty to become a part of that story for one night — to join Dreyer and Einhorn’s creative process, partnering with celebrated actors and historical figures long dead but not forgotten.

“From a musical standpoint, the members of the University Chorus were the shining stars,” Endris said.

As Joan of Arc herself might have said, their performance would suggest that they were “born to do this.”