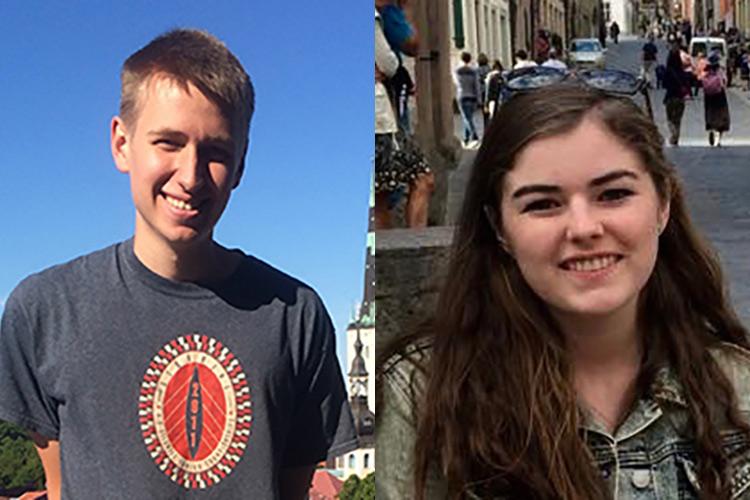 Two Colgate students will teach English in Germany for a year thanks to being awarded Fulbright English Teaching Assistantships.

William Andrews ’16, a German and international relations major from of Richmond, Va., and Carolyn “Cara” Skelly ’16, a German and Middle Eastern and Islamic studies double major from Wellesley, Mass., will be helping students to learn the English language while also serving as ambassadors of American culture.

As juniors, Andrews and Skelly participated in Colgate’s Freiburg study group with Professor Claire Baldwin, and they say that formative experience influenced their plans to return to Germany. In Freiburg, Andrews had an internship at the Carl-Schurz-Haus, a German-American Institute, while Skelly held an internship in Berlin prior to her semester in Freiburg. “Cara has been designated as one of a small subgroup of the ETA grantees who will specifically work with the diverse populations in Germany, especially a pressing issue with the large refugee populations of over a million entering Germany last year,” said professor Claire Baldwin, associate professor of German and the chair of the German department.

On campus, Andrews is president of the German Club and a former senator in the Student Government Association. Skelly is membership development chair of her sorority, Delta Delta Delta, an active member of the German Club, and part of the first cohort of the Sophomore Residential Seminars. Both students help tutor local school children.

“Being selected means a lot to me due to the role of Fulbright grantees as cultural ambassadors for their country,” said Andrews. “I am honored and excited to have this opportunity, as I am extremely passionate about increasing understanding among nations, particularly among youth.”

In the wake of his semester in Freiburg, Andrews was also named a DAAD (German Academic Exchange Service) Young Ambassador for 2015–16.

Skelly has done research at Colgate on Muslim immigrants to Germany, and she is eager to get involved with immigrant communities in Germany while on her Fulbright, for example in providing English and German lessons to immigrants and refugees. “I hope to get the chance to improve my German, improve German perceptions of America and get the chance to work with refugees who have settled in Germany,” said Skelly, whose future plans include working on education reform, nationally and internationally, in a nonprofit setting.

“I am thrilled for both Will and Cara,” said Kim Germain, Colgate’s assistant dean for fellowship advising and a close adviser to all of our Fulbright applicants. “Their enthusiasm for cross-cultural exchange and for Germany is unbridled, and I’m confident that they will thrive both inside and outside the classroom in Germany.”

The Fulbright Program is the flagship international educational exchange program sponsored by the U.S. government and is designed to increase mutual understanding between the people of the United States and the people of other countries. Recipients of Fulbright grants are selected on the basis of academic achievement, as well as demonstrated leadership potential in their fields.