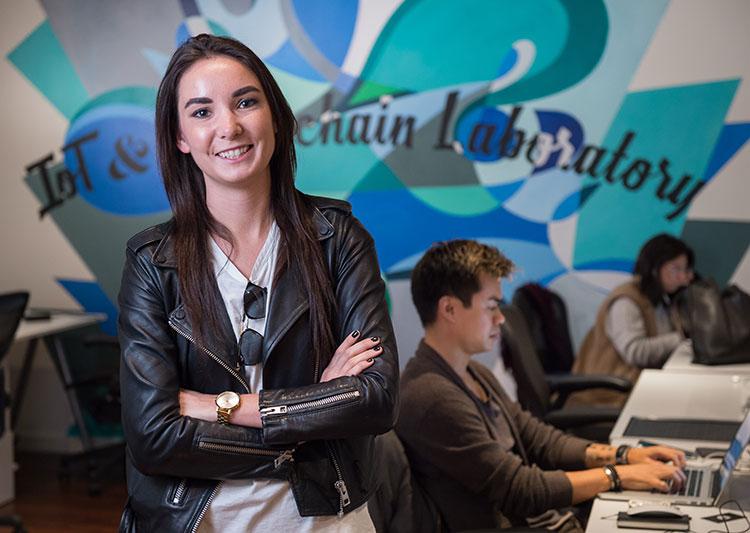 It started with sneakers and fine art. Samantha Radocchia ’11 and her colleagues had an idea: to develop a microchip for upscale products, from limited-edition Air Jordans to an original Matisse.

“We are giving secure identities to real-world things,” said Radocchia, one of four co-founders of Chronicled Inc.

Their line of microchips and sensors communicate with and register assets to an open ledger through an emerging database technology called blockchain.

Although their San Francisco–based company’s original goal was to enable clients to fight counterfeiting by verifying a product’s identity, it didn’t take Radocchia and her colleagues long to realize “the power of blockchain is so much bigger,” she said.

Founded in 2014, Chronicled has since formed partnerships with businesses such as pharmaceutical companies tracking supply chain and temperature data, music festivals and art galleries enhancing the user experience, and vacation-home–rental companies providing information to travelers. Users can tap into their chip’s data through their smartphones or other devices.

Radocchia, who grew up dismantling computers and reassembling them with her entrepreneurial father, has IT encoded into her DNA. At age 9, she was learning HTML and CSS at web camp.

As a Colgate student, she customized her majors — English and anthropology — to explore linguistics, symbolic systems, and virtual online communities through independent study.

By senior year, she had launched a personal shopper start-up called Shop with Stella, which she transformed into a fashion-focused inventory tracking and universal shopping-cart system called Stunable.

We tracked down Radocchia, who’s been named to the 2017 Forbes 30 Under 30 list in enterprise technology, to learn more about her. “We just had the opportunity to partake in a gallery opening at 111 Minna Gallery in San Francisco. Every piece of art had the chip embedded in it. As you walked around with your device, you could see information about the paintings, buy them, or buy prints of them. To see the product in action, and see people who were like, ‘Wow, this is magic,’ made me even more excited about what we build.”

A day in the life of a CPO

“I’m the interface between business development, our customers, engineering, and marketing. So I get to participate in all aspects of the product lifecycle, and I get to translate a technology that is highly complex to a real-world understanding and usability.”

The path to Chronicled

“After Stunable, I did some independent work with Microsoft. Then, I wanted to take some time off from tech, so I went to Utah and worked on ski patrol at Park City Mountain Resort. I love skiing, I love the mountains, and I’ve always wanted to live there. But it was a very bad season — no snow. So I started consulting for a client creating a website that would identify all of the deals on the Internet; we ended up cofounding Huckabuy. Two years ago, I came together with the team to start Chronicled.”

“It’s a mix. It’s a very casual, stereotypical startup: basketball hoop, ping-pong table, and open-floor plan. Some days, we’ll work as we go, and other days we’re meeting with some of the larger Fortune 500/Fortune 100 companies.”

As a junior, Radocchia was taking Sociology of Aging, in which students were tasked with telling the life histories of town elders. At the same time, she was doing an independent study for directing plays, so she decided to combine the two and put senior citizens on stage. She likens the skills she used as a director with those she uses today managing a team: “helping people not merely to perform certain duties and tasks but also to help them grow into themselves, overcome insecurities, and build confidence,” she said. “We all have our own skill sets, so let’s leverage the best, recognize the weaknesses, and work together to create something big.”

“I’ve always been into extreme sports,” said Radocchia, who was a competitive skydiver during her Colgate days. “I don’t do that anymore. I’m trying to be a little safer, but I enjoy the outdoors, hiking, traveling, and skiing. I still love the mountains.”