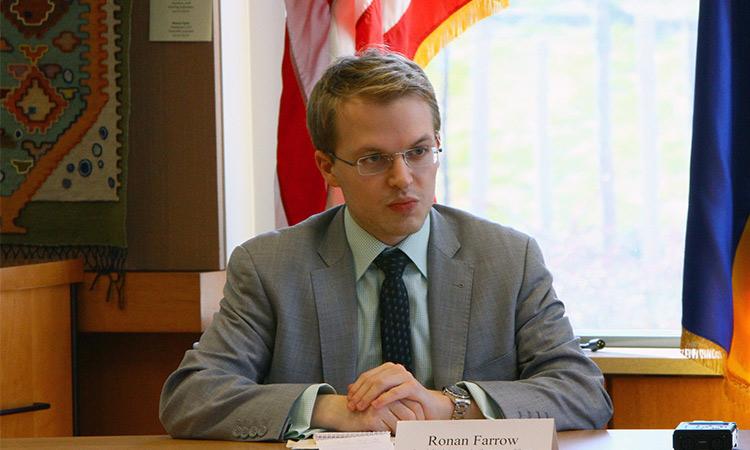 Ronan Farrow, author of the explosive Harvey Weinstein sexual assault and harassment investigation published in the New Yorker, recently spoke with a crowd of Colgate students about the future of journalism.

Farrow rose to prominence following his 10-month investigation into Weinstein’s history, including interviews with 13 women who spoke out against the famous producer. The resulting story led to a groundswell of accusations and news coverage that continues to unfold today.

“This is not just a Harvey Weinstein problem; this is an abuse of power problem,” said Farrow.

Part of the annual Milmoe Workshop in Journalism, Farrow’s talk was hosted by the Colgate Maroon-News and Colgate’s Center for Leadership and Student Involvement. His visit to campus included a workshop for the newspaper’s editorial staff in addition to a public talk in Love Auditorium.

“We are realizing that, in every aspect of our society, there are vast systems in place that allow the most powerful people in our country to abuse their power and commit crimes against vulnerable individuals with impunity,” said Farrow.

Before becoming a journalist, Farrow graduated from Yale Law School and became a member of the New York State Bar Association. He later worked in Afghanistan and Pakistan for the Obama administration as special adviser for humanitarian and NGO affairs.

“I eventually found that the most influential thing I could do was to tell stories about the injustices that I saw,” said Farrow. “Writing is a powerful and meritocratic way to tell the world important stories.”

Now an NBC News correspondent, Farrow hosts the investigative series, “Undercover with Ronan Farrow,” on the Today Show. Farrow reports on the hidden issues that are not often covered by mainstream news outlets.

“There has been a clear change in what readers want from news media. They want journalism that doesn’t play it safe, that doesn’t appease those in power,” said Farrow. “Investigative journalism is becoming more sought after than ever: Even Teen Vogue has assembled an investigative unit.”

In previous years, the Milmoe Workshop in Journalism hosted Pulitzer Prize-winners Sacha Pfeiffer and David Fahrenthold. Maroon-News editors-in-chief Jackie Dowling ’18 and Megan Leo ’18 had a conversation about inviting Farrow when his first piece on Weinstein came out in early October.

“In light of the events last spring that caused a campus-wide conversation about sexual assault, we thought Farrow’s perspective would be highly relevant,” said Dowling. “He wants to hand the baton over to the next generation of reporters, especially on college campuses, so that his work can have a lasting impact.”

Farrow encouraged student journalists to use their voices to fight against the systemic problems young people are inheriting from previous generations, including climate change, economic inequality, and a pervasive rape culture.

“This is not going to be easy for any of you as you walk out of this school and change the amazing work that you’re doing on campus into amazing work that we all need in the world to address these problems,” said Farrow. “Exposing injustice and fighting it is exactly what we need you to do.”