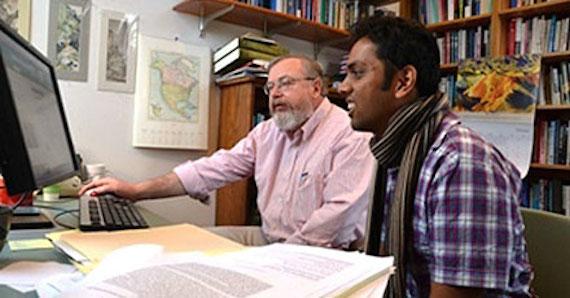 Michael Johnston, Charles A. Dana professor of political science, has been collaborating with Bertram Levine ’63, now a political science professor at Rutgers, for decades. The two scholars recently co-wrote an op-ed in The Washington Post called “Making campaign contributions anonymous.”

It the article, they argue that less transparency in campaign contributions could limit corruption:

“If incumbents could not know the sources of contributions to their war chests, they could not “thank” their benefactors with policy “favors,” nor could they extract contributions through intimidation. Donors wanting to support challengers — who are routinely out-spent by solid margins under the current system — would not need to worry about reprisals from incumbents.”

“The piece has roots that go fairly far back,” said Johnston. “In the 1990s Bert published an article in a journal I helped edit that laid out the anonymity idea in an early form.”

Johnston said the idea stayed alive for both of them over the years. “The most recent impetus came from a paper Bert and I co-authored, and he presented, at the Midwest Political Science Association’s meetings in Chicago this past spring.”

Johnston is one of the world’s leading authorities on corruption. In 2009, his book Syndromes of Corruption: Wealth, Power, and Democracy was awarded the prestigious Grawemeyer Award for Ideas Improving World Order. He’s studied corruption around the world, and mentors students interested in political corruption.

In 2002, he mentored Bharadwaj Reddy ’12 and Srikar Gullapali ’13 (pictured above), when they spent a summer researching corruption and bribery at government offices in Bangalore, India.

Here is Johnston discussing the causes of corruption around the world: