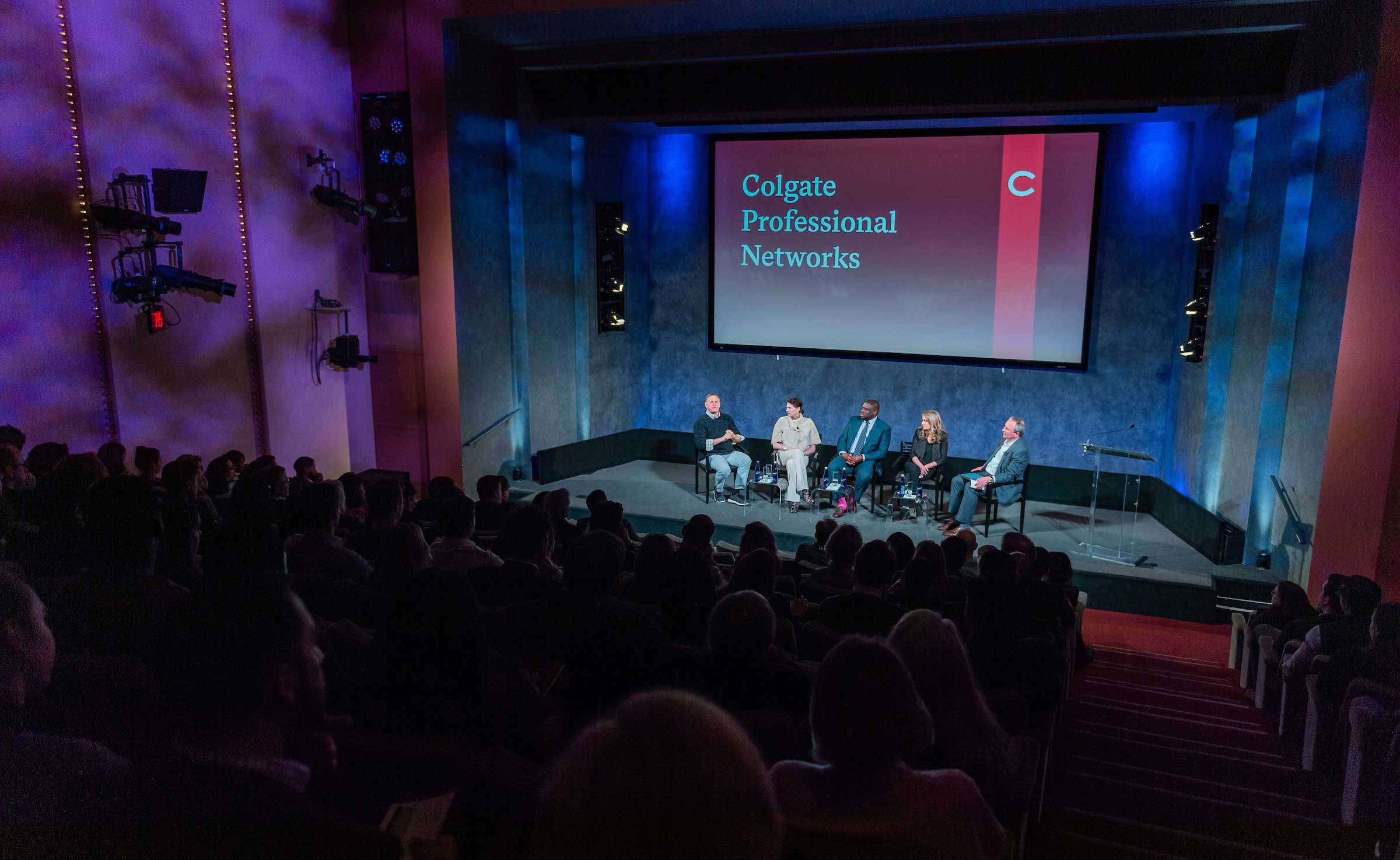 Alumni leaders in innovation and creativity share their stories at the Paley Center for Media in New York City in February. (Photo by Mark DiOrio)

Colgate faithful in New York City gathered at the Paley Center for Media earlier last month to hear from five innovative alumni leaders about their work and their thoughts related to the University’s development of a new Middle Campus Plan for Arts, Creativity, and Innovation outlined in The Third-Century Plan.

Titled “Innovation and Creativity: A Conversation with Alumni Leaders,” the panel was moderated by Global Chairman and CEO of EY Carmine DiSibio ’85, P’18,’21 as part of Colgate’s Professional Network series of events designed to bring together alumni for career networking and immersion in dynamic conversations.

Lesleigh Cushing, associate dean of the faculty, opened the evening with a tour through early plans for major changes to Colgate’s Middle Campus, specifically the area between Case Library and Dana Arts Center.

“We see the Middle Campus as a site for experimentation — with rehearsal and performance spaces for student theater and improvisational groups; for maker spaces for traditional crafting and digital fabrication,” Cushing said, adding that plans include computer labs for coding, photography, archaeological labs, music, entrepreneurial endeavors, and flexible gallery spaces.

“We are interested in bringing students into the habit of mind of doing experiential learning instead of passive learning. They need the opportunity to be designers, makers, and thinkers,” Cushing said.

Panelists pointed to their Colgate education as sparking the curiosity and the complexity of thought essential to success in their respective careers. At EY, DiSibio said he values the concept of protecting those who are working on projects that could result in drastic change.

“At a big company, you need to isolate those innovators,” DiSibio said. “Otherwise, the immune system of that company will try to shut it down. You need to create an innovation zone that you can protect.”

Hatkoff said he encourages people to spend most of their time thinking about the problem they are trying to solve, and the solution comes after really understanding the issue at hand.

“Everyone is talking about big data, but what we really need to focus on is the search for big wisdom. I think that’s a major opportunity for Colgate and the Middle Campus,” said Hatkoff.

For Bruno, who has led several legacy magazines and brands, including Town and Country, at the Hearst Corporation for the past 13 years, innovation must be guided by the brand principles that have anchored those publications through the years.

“Ultimately, we create content that gets people to take action, which is what marketing is all about,” Bruno said. “We are leveraging real-time data to inform us, as content creators, on insights into content strategy for our editorial and business partners. This helps build brands, but we also can’t lose the art of telling stories.”

Reid said many of his best learning experiences at Colgate happened in student government, where he learned to improvise, and he hopes that spirit of collaboration and creativity will only be bolstered through the plans for the Middle Campus.

“I discovered a lot of things about myself,” Reid said. “I discovered that I could reinvent myself in many different ways. I came to school thinking I’d be a lawyer and left being a teacher, and I’m still a teacher 26 years later.”

Lea Ciavarra ’91, who is an architect, said she attended the New York event because of the constant discussion about creativity in her industry.

“Creativity and innovation happen best when you collaborate, and that is what’s exciting about some of the things proposed in The Third-Century Plan at Colgate,” Ciavarra said. “Those cross-disciplinary interactions — I think that’s where it’s at right now. Some of the best ideas come when you’re mixing fields and ideas.”