Planning for carbon neutrality in 2019 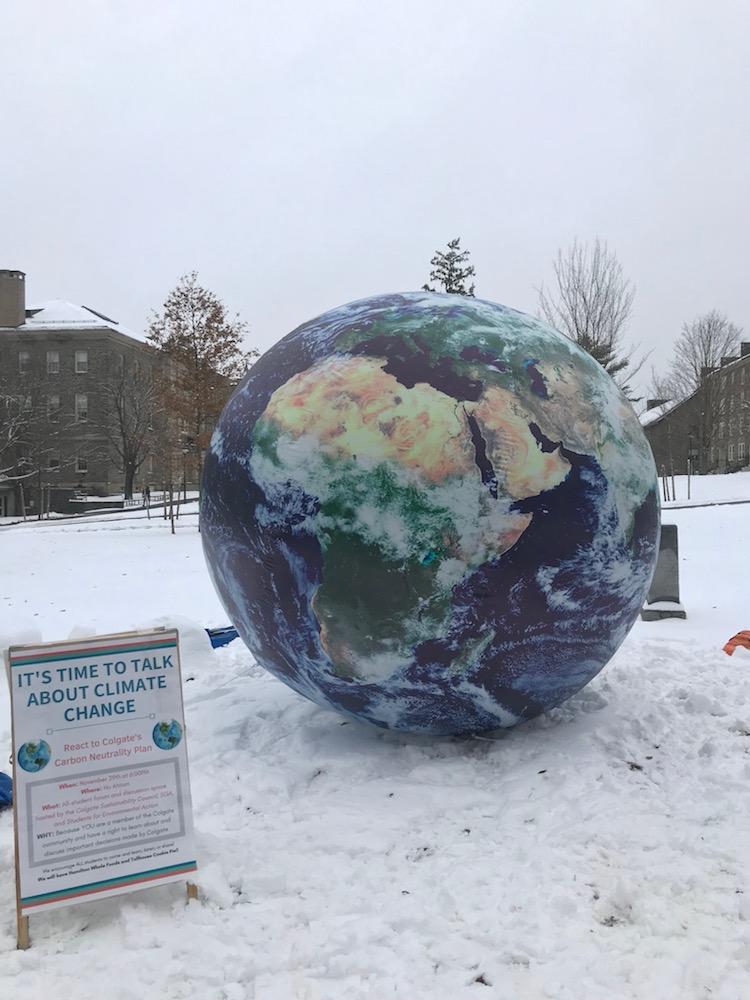 In 2019, Colgate will become the first university in New York State to achieve carbon neutrality.

This decision to achieve zero net emissions via on-campus carbon emission reductions and investments in carbon offsets came about as a result of the University’s Sustainability and Climate Action Plan of 2011.

A student forum last month on the details of carbon neutrality at Colgate and its offset initiatives was the first of three special events on campus to discuss the progress of the University’s carbon neutral commitment. The session was marked by a robust presentation and Q&A session led by members of the Student Government Association followed by small breakout sessions where students were able to voice their perspective to peers.

Additional events include a faculty meeting to discuss the progress of the plan and an open forum for the larger campus community on December 6.

“To gather students from so many interests and disciplines with a goal of understanding and advocating for the right carbon offsets speaks to the holistic education of a liberal arts institution,” said Sustainability Council member Christina Weiler ’21. “Students care about issues outside the classroom, like climate change, and value Colgate’s action in response.”

Colgate’s advances toward sustainability began long before 2011. In 2005, the Colgate Sustainability Council developed a new vision to ensure a safe, healthy, and sustainable environment. Four years later, Colgate signed the American College and University Presidents’ Climate Commitment, which challenged the University to curb or offset carbon emissions by 100 percent. And, in 2011, Colgate was the recipient of the Climate Leadership Award given by Second Nature during its annual Climate Leadership Summit.

In total, Colgate has reduced on-campus emissions by more than 20 percent since 2009.

The Sustainability and Climate Action Plan of 2011 outlined concrete actions to achieve zero net emissions via carbon footprint reductions and environment offsets, including Colgate’s investment in Chile’s reforestation project, by 2019. As this date — and Colgate’s goal to become the first higher institution in New York to achieve carbon neutrality —  nears, sustainability is increasingly at the forefront of many discussions.

“Our current cultural, economic, and political systems encourage intensive and extensive use of natural resources that, through their extraction and consumption, create pollution, waste, and social and environmental inequities… Simply put, our current way of living is unsustainable, and overcoming this presents a great challenge in our time.” – 2011 Sustainability and Climate Action Plan

While Colgate works to reach its carbon neutrality goal in 2019, the University has continually expressed its commitment to combating climate change. In addition, achieving neutrality also means maintaining that status, year after year, while working to decrease on-campus emissions and the amount of offsets needed.

Programs including Ucan, the student-driven recycling initiative; an extended study to Patagonia, Chile, to help facilitate direct engagement with various conservation models; and an aspirational goal of becoming a zero-waste campus by 2025 are some of the many initiatives that will aid Colgate’s environmental efforts in years to come.