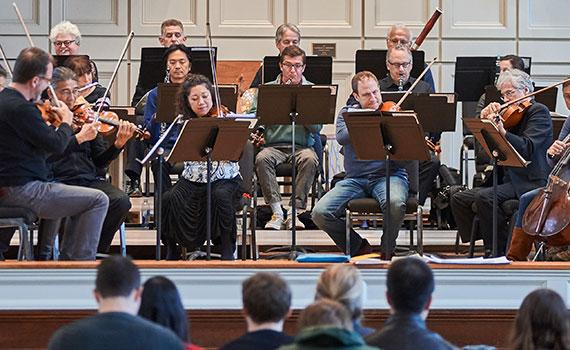 Democracy — typically applied to politics — has found a place in music. The Grammy Award–winning Orpheus Chamber Orchestra, famed for its lack of a conductor and uniquely democratic approach to music making, visited Colgate this semester for a performance and discussion about the applications of a collaborative organizational structure.

The New York City–based orchestra was founded in 1972 and was among the first chamber orchestras to function without a conductor. Instead of a top-down structure, the musicians work collaboratively.

“You need many more rehearsals in order for all of the musicians to determine what the interpretation of a work is going to be,” said Marietta Cheng, professor of music and Colgate University Orchestra conductor. “But because there is so much personal input from each musician, you see a greater commitment and devotion. There’s a certain kind of joy and satisfaction the musicians have in dedicating themselves to this collaboration and giving it their all.”

For their Colgate performance, Orpheus’s 38 performers partnered with renowned German pianist Christian Zacharias for a dynamic two-hour concert, featuring Mozart’s Overture to La Clemenza di Tito, Beethoven’s Piano Concerto No. 1, Bizet’s Symphony in C Major, and the orchestra’s world premiere of Jessie Montgomery’s Records from a Vanishing City. There were two standing ovations, and the concert was repeated later that week at Carnegie Hall.

Prior to the concert, the musicians (who previously performed at the university in 2008) hosted an open rehearsal followed by a question and answer session with students from the Colgate University Orchestra.

Sponsored by the Christian A. Johnson Fund, the event gave Colgate students insight into teamwork and how collaboration produces better results.

“You can imagine that if you have that many people working together, they’d have little quibbles over different interpretations of tempo, style, phrasing, and dynamics,” Cheng said. “So they have to roll up their shirtsleeves and come to agreement for a successful end result. That’s a lesson that will help students in the long run.”

Rachel Kierstead ’19, a violinist in the Colgate University Orchestra, agreed. “The musicians’ ability to listen to each other and accept criticism before the entire group is a model that we can all learn from,” she said, “whether we’re in music, business, or any other pursuit that involves working with others.”