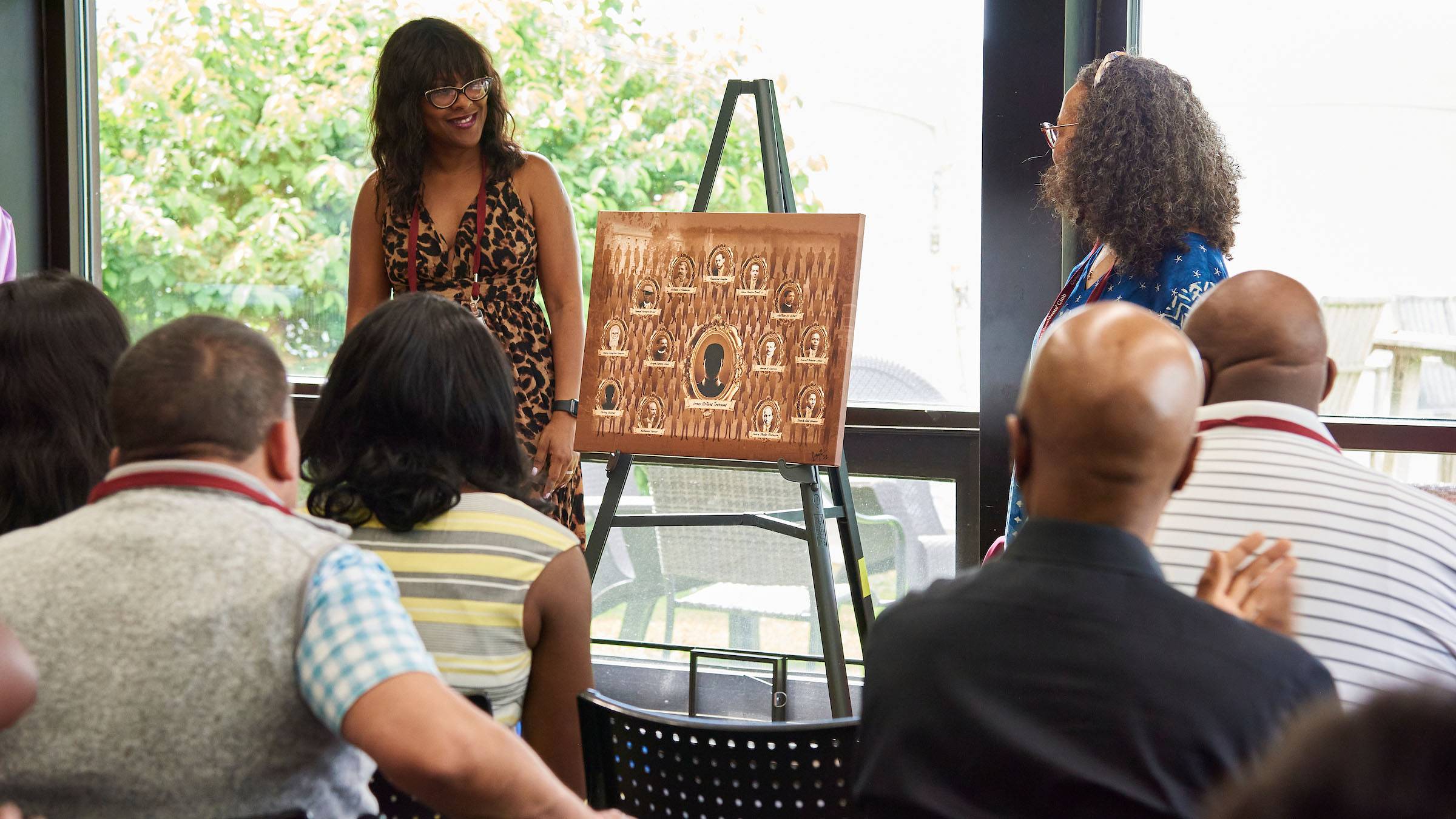 Filmmaker Jacqueline King-Howell ’97 screened a portion of her upcoming documentary, Men of Mark, inspired by the work and research of Colgate University trustee emerita Diane Ciccone ’74, P’10 as part of Colgate’s reunion celebrations on June 2–5.

The film chronicles the lives and legacies of Colgate’s first Black students and is based on Ciccone’s 2019 book, Into the Light: The Early African American Men of Colgate University Who Transformed a Nation, 1840–1930.

“We wanted to do justice for these men and bring their stories to light,” says King-Howell. “I’m hoping that, with this film, we can help current and incoming students understand the groundwork that has been laid for them.”

Audience members in the ALANA Cultural Center met Colgate’s first Black student, Jonas Holland Townsend, who arrived at Colgate in 1840 and would go on to become a pastor, scholar, and abolitionist actively involved in the Underground Railroad as well as an organizer of the first National Colored Convention in 1843. Townsend eventually settled in Waco, Texas, and became a congressman representing the state’s second congressional district.

King-Howell’s 23-minute preview also shared the story of Adam Clayton Powell, Jr. ’30. Powell joined the ministry at New York City’s Abyssinian Baptist Church and earned his master’s at Columbia University. He began his activist work from the pulpit before representing New York in the House of Representatives from 1945 to 1971. Powell also served as the chairman of the Education and Labor committee and helped pass important social and civil rights legislation under Presidents John F. Kennedy and Lyndon B. Johnson.

“We have amazing ancestors, and we will become ancestors too,” said Ciccone, herself a pioneer as a member of Colgate’s first fully coeducational cohort. “The fact is, you can come to Colgate, take what you need, and then go back and enrich your community. We have an amazing history, and this is just a little pocket of Colgate University that we wanted to spread to inspire others.”

The Men of Mark screener concluded with an animation that followed the journeys of seven of Colgate’s Black students from the classes of 1922 to 1926 before highlighting Antonio Ramon Delgado ’99. A Rhodes Scholar, Delgado studied at Oxford before earning his law degree from Harvard Law School in 2005. Delgado was a two-term congressman from New York’s 19th congressional district before he was appointed lieutenant governor of the state in June 2022.

“I’m so glad that this film and this book have been written so our ancestors can be revered on this campus,” says Tracey Hucks ’87, MA’90, former provost and dean of the faculty. “This shows that not only were we here, but that we succeeded and left a legacy.”

Following the screening, King-Howell joined Ciccone and Hucks for a panel discussion. The trio shared their favorite Men of Mark stories, as well as national and global issues they advocated for as students, ranging from immigration rights to divestment and the dismantling of apartheid. After the discussion, the panel took questions and comments from alumni in attendance. King-Howell closed the session by encouraging audience members to take a lesson from past generations.

“Look at these men who were enslaved and who faced incredible odds and everything that they've done,” said King-Howell. “Don't shrink yourself. You belong here and you belong in these spaces. Put your chest out and walk around this campus like this is yours.”