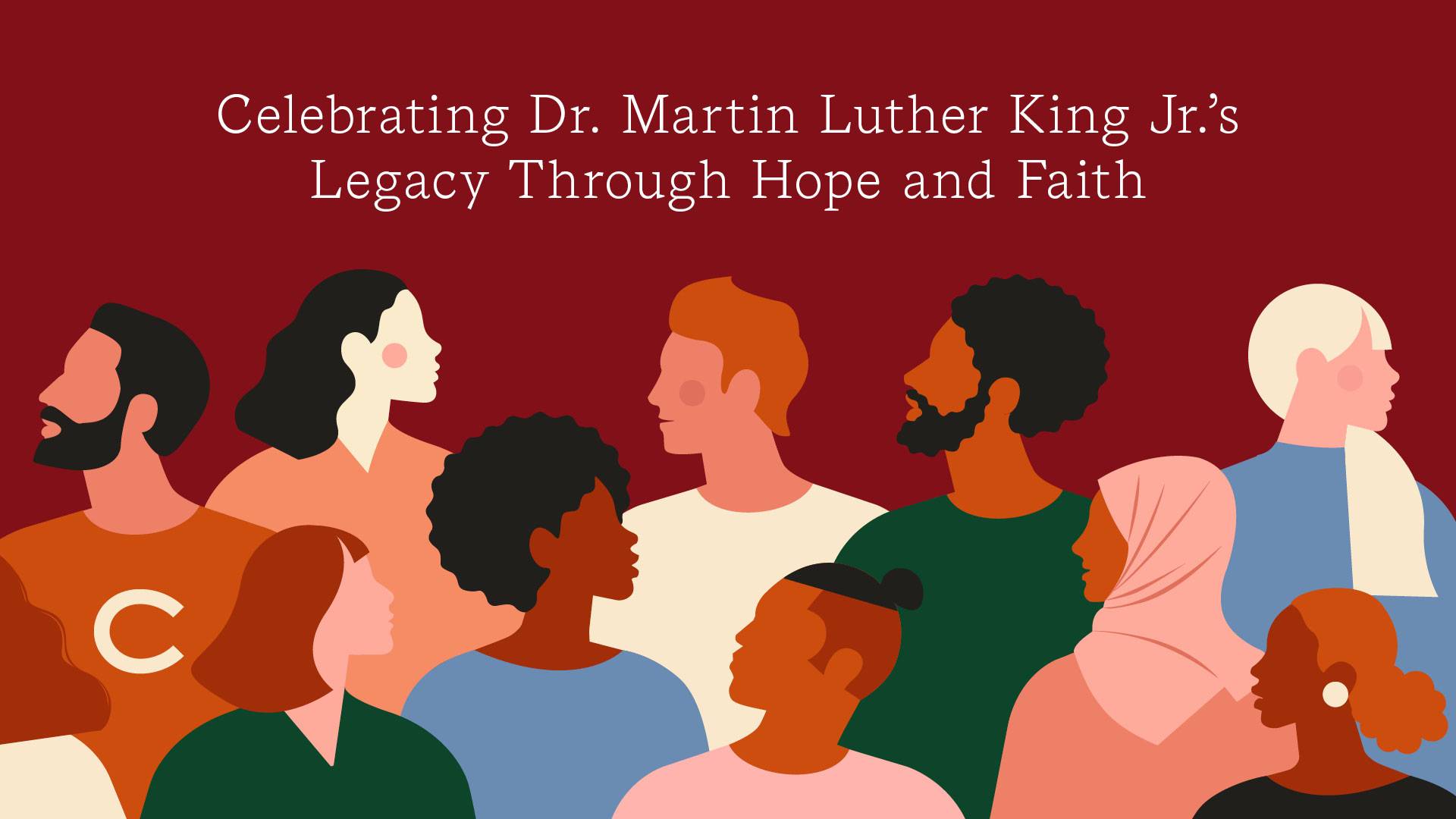 To commemorate the legacy and life of civil rights leader Rev. Dr. Martin Luther King Jr., the Africana, Latin, Asian, and Native American (ALANA) Cultural Center organized a 10-day series of events in collaboration with offices and departments across campus. The MLK celebration started on Jan. 25 with a virtual opening ceremony that showcased the voices and experiences of students, faculty, and staff.

President Brian W. Casey emphasized the theme of faith and hope behind this year’s celebration. “To be on a campus is to be engaged in making one’s future,” he said. “In these times, it is to be part of making this nation’s future. Although we see endless moments of finite disappointment these days, this nation is still marked by infinite hope. Better days are ahead — this is true.”

The Student Government Association (SGA) President Amarachi Iheanyichukwu ’21 reflected on the losses and lessons of the past year before highlighting King’s message of empathy and introspection.

“In his teachings, Dr. King sought to do more than just illustrate the moral bankruptcy of the nation,” Iheanyichukwu said. “He also hoped to inspire us to struggle toward the dream of harmonious mass prosperity that would cut through the dissonance and division that plagued and continued to plague society.”

Drawing on King’s vision of unity, Iheanyichukwu discussed the significance of community in times of upheaval. “As we look toward the start of the next semester and this new year — which will no doubt bring new challenges to conquer — it is important that we maintain our hope and our faith in one another,” she noted. “Together, like Dr. Martin Luther King Jr., we can be ordinary people who can accomplish extraordinary things.”

Throughout the week, there was an abundance of panel discussions and talks headed by scholars and activists. Alumni and student mixers, cosponsored by Mosaic, transitioned intellectual discussions into personal interactions. Still other events — such as a Colgate University Museums–sponsored talk “Lessons Learned from African American Community Museums,” the Film and Media Studies discussion of John Lewis: Good Trouble, and the Office of the Chaplains’ lunchtime conversation “God, King, and Kitchen Tables: A Heretics Dialogue,” with with Rev. William Lamar, pastor of the Metropolitan AME church in Washington D.C. — highlighted interdepartmental collaboration.

For Davis, social justice includes ending legacies of colonialism and slavery, explicitly challenging racial capitalism, and eradicating gender violence. Her organizing imagines new ways of addressing community problems without dispatching police and prioritizes alternatives to imprisonment such as education as a form of restorative justice.

“The kind of activism I’ve always embraced is an activism that relies on the imagination and the need to educate the imagination,” she said. “None of us could have imagined this moment, but we prepared for it.”

Bonnie St. John, former Paralympic skier and founder of Blue Circle Leadership, also addressed the Colgate community, during a talk hosted by the ALANA Cultural Center and Mosaic. It was made possible by the Cutaia Family President’s Discretionary Fund for Diversity, Equity, and Inclusion from Gio ’94 and Maree Cutaia in support of Mosaic programs.

Despite having her right leg amputated at age five, St. John became the first African American to win medals in the Winter Olympics.

St. John delved into the role of political correctness in professional and personal modes of communication. “Political correctness was designed to prevent problems,” she said. “In today’s environment … a lot of what’s happening is beyond prevention. People are clashing on differing points of view or sets of assumptions. We are starting to work more with methodologies that can help you deal with what happens after you’ve had an identity collision.”

Student voices were also prioritized in this year’s speaker series. For instance, students from various multicultural organizations came together to present “Race, Class, and Culture as Colgate Students.”

The speakers honestly addressed what it felt like to be a person of color on Colgate’s campus, referencing the culture shock of losing communities in which their culture was heavily represented as well as difficulties related to identifying as an international or low-income student. Many of them acknowledged difficulties being the only person of color in a classroom.

As with many of the MLK Celebration events, audience members both resonated with experiences of injustice and vocalized their desire to tackle oppression at the end of the discussion. One of the event moderators, ALANA Ambassador Keilani Blas ’22,
concluded: “Clearly there is a gap in which we need to humanize our students and our education system… It’s really important to make the classroom a space for everybody — an equitable space and a space of radical love.”