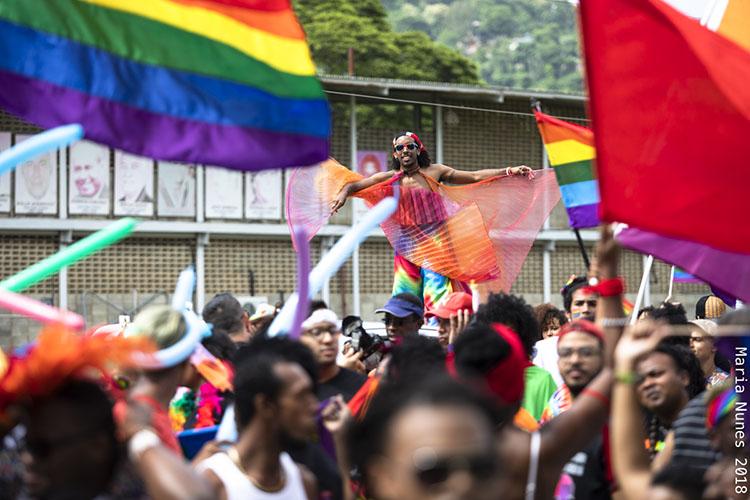 “Existing is resisting,” according to Michael Francis James ’17.

While preparing to enter the soil and water sciences PhD program at the University of Florida this fall, the Trinidad and Tobago native worked with a committee of colleagues to stage the nation’s first public Pride Arts Festival, and he continues to advocate for legal reform on behalf of LGBTQ citizens.

“We have the Equal Opportunity Act, and we’re pushing for it to be more inclusive,” James said. “We want to stop discrimination on the basis of sexuality, age, and health status. Our goal is to see more people have job and housing security.”

On April 12, James and others around the world watched in awe as the High Court of Trinidad and Tobago ruled in favor of LGBTQ activist Jason Jones and his challenge to sections of the country’s Sexual Offenses Act — a ruling that effectively decriminalizes homosexuality.

James described the high-profile case as “a big deal,” not limited to people within the LGBTQ spectrum.

“[The law] had not been actively enforced for decades, yet it created a space for queer people to be seen as morally repugnant,” James explains. “This led to people being pushed out of the public sphere because of the lack of legal protection. We have to look at the effects of [the law]: job insecurity, lack of legal protection or mental health services for youth, and more.”

For James — energized to organize and armed with love for his country — the judgment suggests a new age for Trinidad and Tobago.

This summer, he helped prepare for the more than 40 pride events by doing everything from navigating the legal process and completing administrative tasks to stilt walking and garnering community support.

“We’ve asked people to support the community by doing smaller actions like sharing information about pride events or putting a LGBTQ flag on their social media profiles,” James said.

James acknowledges that some might see this as bumper-sticker activism. “But we’re at a stage in Trinidad where, if people believe that you associate with or support events in the gay community, you are automatically thought to be gay as well,” he said. Rather than directly confronting those prejudices, he opts to meet people where they are.

James knows that, as he pursues his work, his socioeconomic status has afforded him a level of security not often available to others in his country. He also recognizes the significant impact of Colgate LGBTQ Initiatives, coursework, and student-faculty mentorship.

“I began organizing events for Lambda during my second year. I definitely grew into the fullness of skills while at Colgate,” he said.

“I was supported while being able to intellectually unpack the trauma of growing up gay and everything that often comes with that experience,” he added. “I learned how to understand where people are coming from and how to reach them in different mediums. I didn’t know how much going to Colgate, and getting a liberal arts education, would fill me up and leave me feeling so whole.”

Assistant Professor of LGBTQ Studies Danny Barreto remembers James’s leadership on campus and how he followed the “beat of his own drum.”

“Michael is queer, a person of color, and an international student, but his presence at Colgate was anything but marginal,” Barreto said. “He was in the center of everything — class discussions, student life, activist movements, a member of honor societies. He is a constant reminder that queer people on this campus are not in the margins. They are integral to life at Colgate in a lot of different ways.”

In thinking of his country’s next steps and knowing missteps are bound to happen, Michael Francis James hopes to keep progressing forward.

“I want us to come together and be the best we can be,” James added. “This little island has so much richness to contribute and to celebrate. In regards to LGBTQ people, we have been contributing to our society and will continue to do so. I want my queer community to be able to live our lives freely.”