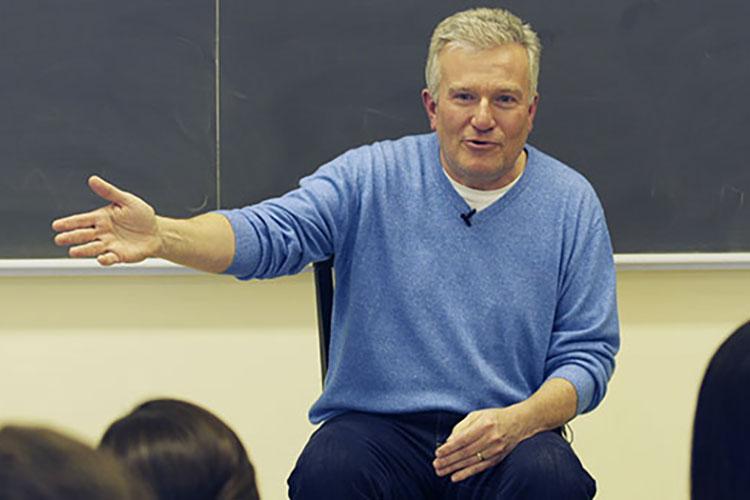 Part of the Robert A. Fox ’59 Management and Leadership Skills Program, this new career development course brought alumni to campus during spring 2016 to offer career advice and shed light on the ways in which the digital era has impacted their industries.

“The topic is particularly relevant when you talk with 20-year-olds who are essentially the ones turning business upside down,” said Carey.

A dedicated group of sophomores, juniors, and seniors attended the intimate weekly gatherings, facilitated by Murray Decock ’80, adjunct instructor and senior vice president for external relations, advancement, and initiatives. Decock began each session with an introduction, followed by a dialogue with the presenter and an opportunity for students to ask questions.

“It was extremely motivating to get a chance to speak to these amazing alumni who were once sitting in our seats — quite literally, in Alumni Hall,” said Danielle Dillon ’18, an English and political science double major from Hingham, Mass. “Robert Fox ’51 (pictured above) knows the power of the Colgate liberal arts education and, through his gift, has allowed us to bring amazing leaders to campus to share their knowledge about managing change in an era of disruption and innovation,” said Michael Sciola, associate vice president of Institutional Advancement and Career Initiatives. “After all, in today’s world, it’s no longer enough to get the answer right; to be successful, Colgate graduates will need to know how to get the question right.”

As director of product innovation and original content at Netflix, Angela Morgenstern ’97 spoke to the disruption of the TV and entertainment industry. Maggie Dunne ’13, founder of Lakota Children’s Enrichment, discussed the importance of risk-taking and the influence of digital communications on her nonprofit organization.

Duncan Niederauer ’81, former CEO of the New York Stock Exchange (NYSE), traced the challenge of converting the NYSE to a digital system and assessing who was proactively dedicated to enacting this change.

He was one of several speakers who noted that leaders with emotional intelligence and empathic awareness are most effective at adapting to industry advances and fostering positive work environments. “You’re obliged to leave every situation better than you found it — it’s that simple … you are in a position to make other people’s lives better,” he said.

“A point that [Niederauer] made particularly struck me,” Dillon said. “Everyone you meet is a role model — good, bad or otherwise. So often, we get discouraged by bad experiences; it was good to hear that there is a silver lining.”

The final presenter, Tribeca Film Festival co-founder Craig Hatkoff ’76, spoke about the transformative power of storytelling in a digital age. He co-founded the film festival with his wife, Jane, and actor Robert DeNiro after the 9/11 terrorist attacks as a way of rebuilding the economy and the spirit in New York City’s Tribeca neighborhood. “Having a set of skills that allows you to inspire people is, to me, the most interesting aspect of leadership,” Hatkoff said.

Michela Hendell ’18, a political science major from Scarsdale, N.Y., identified an underlying theme within the alumni presentations. “Liberal arts students are actually more qualified to succeed after graduation,” Hendell said. “We are trained to think critically and analyze an array of information, and our comprehensive curriculum empowers us to adjust to new challenges. These abilities are increasingly important as industries are being disrupted.”

As the series progressed through the spring semester, the days lengthened, and the light streaming through the classroom windows illuminated students’ new knowledge and skills.

“I learned that it is important to take advice, but also important to understand that it is up to you to create your own path for success,” said Raffi Khatchadourian ’17, a mathematical economics major from Manhasset, N.Y. “And as Liz Wessel [the CEO of WayUp who was a guest lecturer] taught me, learning and having fun are necessary parts of success.”