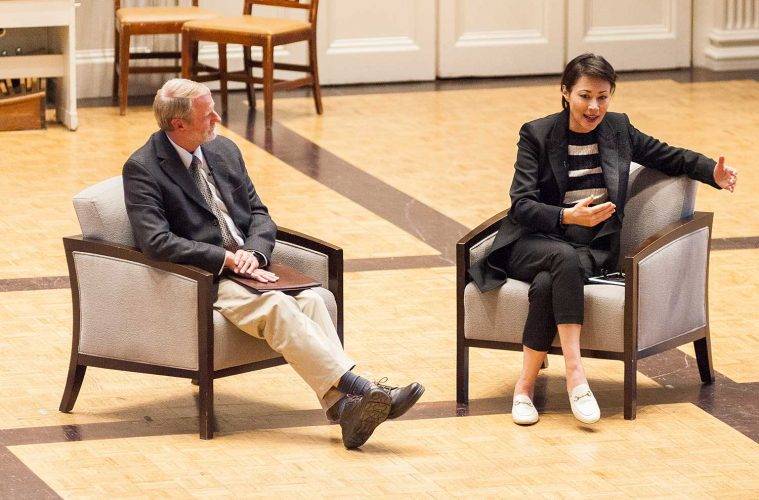 Award-winning journalist Ann Curry visited Colgate on April 22 to discuss climate change and her career. The talk coincided with Earth Day, which was fitting given Curry’s past coverage of climate change, including groundbreaking reports on glacial melt and the changing lives of Inuit communities in the Arctic.

“The public needs to be on your side for change to happen, and that’s why media plays such an important role in climate science,” Curry said. “There is a tremendous body of work by scientists that should be shared in a manner that helps people understand what they can do about it.”

Curry’s talk was moderated by Randy Fuller, Russell Colgate Distinguished University Professor of biology and environmental studies. The two sat down for a fireside chat in Memorial Chapel, attended by young journalists, environmental enthusiasts, and fans of Curry’s work.

In her years as an international correspondent for NBC News, Curry reported on human suffering in the Middle East and across Africa, covered natural disasters, including Haiti’s 2010 earthquake and the tsunamis of Southeast Asia, and conducted exclusive interviews with world leaders. Fuller homed in on a 2014 hour-long special report on climate change that Curry fought producers to air.

“[Climate change] is a woefully undercovered subject,” she said. “I think understanding has improved since then, and there is a broader acceptance in America that climate change is real, and warming is happening.”

As climate scientists and journalists are currently both facing criticisms about alternative facts and a lack of credibility, Curry believes the media industry is moving in the right direction. She acknowledged that journalism is “by humans, about humans, for humans,” and is inherently flawed, but she also pointed out that news organizations are becoming more serious and increasing their investigative reporting teams to cover stories in earnest.

Despite decades spent reporting on the depths of genocide and communities threatened by rising sea levels, Curry spoke with a surprising amount of hope. She cited the enthusiasm of the upcoming generation as cause for this optimism.

“I am really inspired by this generation. I can feel their passion for things that matter, and I can hear their concerns about the future,” she said. “This generation will be critical in starting a social revolution that will be thunderous on subjects like climate change.”

Before the talk, Curry spent time in a workshop with members of the Colgate Maroon-News staff, doling out 12 “hard-earned lessons from more than 40 years of journalism.” Her advice ranged from practical to ideological: encouraging attendees to ruthlessly edit out their own opinion and pushing them always to work for the public and not who signs their checks.

In both the workshop and talk, Curry mentioned her father’s advice to her as a child: Do something with your life that is of some service to others. In dedicating herself to truthful reporting and relentlessly pushing to cover stories that she believes matter, Curry has done just that and has inspired others to do the same.

“Pretty much every decision I ever made, why I fought for certain things and why I was willing to risk others, was really about what I stood for,” Curry said. “I don’t think hate is the truth.”

The talk was part of the annual Milmoe Workshop in Journalism and was hosted by the Colgate Maroon-News and the Kerschner Family Series Global Leaders at Colgate.