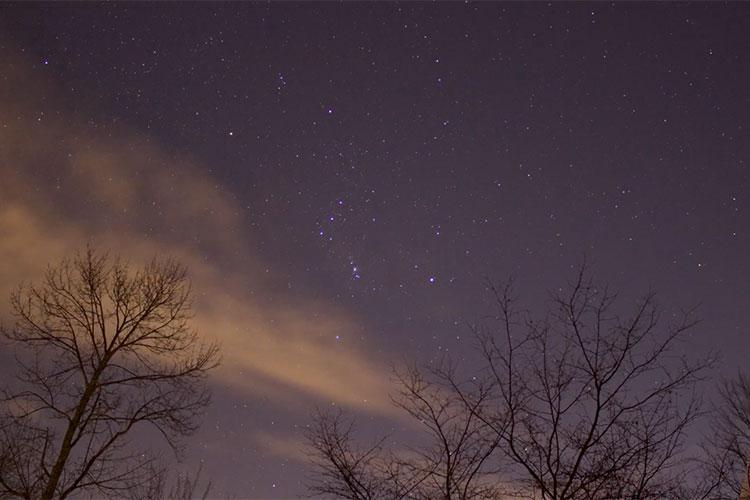 Colgate students are getting a picture-perfect view of the Final Frontier. Star ’Gate, an astrophotography club founded this year, teaches astronomy and photography skills to its members.

Alina Sabyr ’19 (Astana, Kazakhstan), president and co-founder of Star ’Gate, sparked the idea for the club and first became interested in astrophotography during the 2015–2016 school year, when Professor Thomas Balonek taught her how to take pictures of the night sky.

After being introduced to the field of astrophotography, Sabyr conducted summer research on quasars at Colgate’s Foggy Bottom Observatory alongside Ryan Stahlin ’18 (Berkeley Heights, N.J.), Katie Chapman ’19 (Westport, Conn.), and Saiyang Zhang ’19 (Beijing, China), who would go on to become the clubs co-founders.

Quasars, extremely luminous objects, are powered by supermassive black holes at the centers of galaxies. By night, the group used the observatory’s 16-inch telescope to observe several quasars. By day, they compiled data to understand the behavior of quasar OJ 287. At the conclusion of the summer, the group decided to launch the club to help other Colgate students explore the stars the way they did. Professor Balonek, a quasar expert who also supervised the group’s research, serves as the club’s advisor.

Star ’Gate holds weekly meetings to teach members about astronomy and the night sky and takes pictures from various places on the Colgate campus. Photos are posted to the club’s Instagram account.

Some winter nights are cold enough to chill even the most dedicated of astrophotographers. When temperatures drop too far for nighttime expeditions, the group watches the television series Cosmos and makes star charts.

Colgate’s Foggy Bottom Observatory and the university’s rural location allow students to take spectacular images of starry skies. The club received funding for Canon Rebel 6Ti’s cameras, which are similar to those used for standard photography but offer settings suitable for astrophotography.

Sabyr, an astronomy-physics major, credits Colgate with providing the resources to make Star ’Gate possible and says that she hopes more students will want to join in the future. “We wanted to make this club so that all students — not just astronomy majors — could appreciate and learn about the night sky. We try to get a wide variety of students and have been pretty successful in that so far.”

Last semester, the club hosted a public viewing for the supermoon on November 13. Students gathered in the field above Andrews Hall to enjoy hot chocolate and s’mores, as well as the impressive full moon, which appeared larger and brighter than usual thanks to its position in orbit. Students will have to wait until November 2034 to see a moon as close. In the future, the club hopes to host more campuswide events, including an exhibition of their astrophotography.