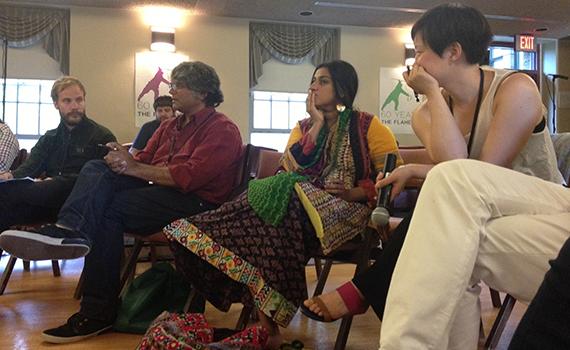 Colgate has hosted the Flaherty Film Seminar for seven years.

Last week, a different group of students filled Colgate’s residence halls and dining facilities when film professionals traveled from around the world to attend the Flaherty Film Seminar.

The numbers: 160 people — documentary filmmakers, programmers, film theorists, and scholars — from 21 countries came for the 60th anniversary of the seminar, which Colgate hosted for the seventh consecutive year. “It is one of the preeminent documentary events in the world,” said Mary Simonson, the newly appointed director of the Film and Media Studies Program and assistant professor of film and media studies and women’s studies.

“Films are shown here, and frequently go on to be screened around the world, taught at colleges and universities, and celebrated at festivals,” she added.

This year, the theme was “Turning the Inside Out” and it was curated by Caspar Stracke and Gabriela Monroy.

Stracke and Monroy made full use of Colgate’s facilities, including Clifford Art Gallery; screening rooms in Little Hall; and the Ho Tung Visualization Lab, where a special film shot with a fish eye lens was shown. Golden Auditorium’s 16mm and 35mm projection capabilities entice the Flaherty organization to return annually to Colgate.

In these specially designed spaces (which were painstakingly set up by the university’s IT staff in preparation for the seminar), participants examined the state of documentary film through screenings and discussions.

Simonson was one of six faculty members to participate this year in the Flaherty, which she has attended the previous five years. Through the seminar, Colgate professors in the film and media studies program get exposure to new materials that they often incorporate into classes.

They also develop close relationships with other professionals in the field and oftentimes ask them to come back during the academic year for a film screening and Q&A. “Personal connections with the filmmakers make opportunities like that possible,” Simonson said.

In addition, films inspired by Flaherty conversations and screenings are shown during the fall Friday Night Film Series and the Alternative Cinema Series.