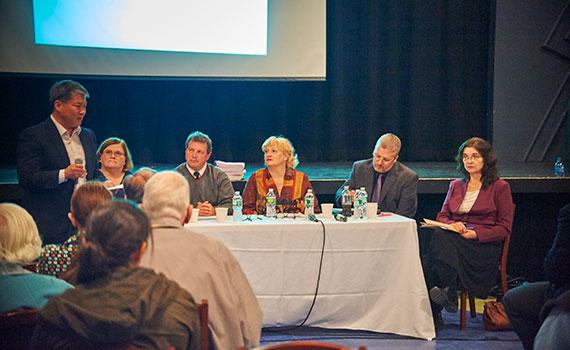 On October 15, a mix of teachers, administrators, parents, students, and citizens from across central New York gathered in a town hall–style meeting to discuss the Common Core.

Hosted by Colgate’s Center for Freedom and Western Civilization and the educational studies department, the event was a debate about the Common Core State Standards Initiative, which is a new set of educational standards that most of the U.S. states have adopted for kindergarten through 12th grade. Some view the Common Core as the cure for a perceived educational decline in the United States, while others claim that it is a governmental intrusion in the classroom and a reduction of teaching to scripted lessons.

The goal of the debate was to unpack what the Common Core is as well as encourage informed discussion about whether or not it is working.

“It is a bit unclear what exactly the Common Core is,” said moderator Robert Kraynak, political science professor and director of the Center for Freedom and Western Civilization. “But I think we know that a lot is at stake, because it’s really about our children, their future, and by extension, country — America — and where we stand in the world.”

The event began with a series of short presentations by six panelists. The first to speak was John Palmer, an educational studies professor at Colgate. Both he and Mary Grabar, a fellow at the Alexander Hamilton Institute for the Study of Western Civilization, gave passionate arguments against the Common Core.

Palmer contested that the Common Core, and the financial incentives that are often tied to it, encourage schools to recognize and reward only one kind of student — the type who does well on standardized tests — and that this limits learning.

“Do we want a school that traumatizes our students, that drills and kills them, and that says that if you don’t pass this exam, you are worthless to us? Or do we want to educate the whole body, the whole mind, the whole spirit, the whole soul?” he asked.

Grabar, meanwhile, took issue with other aspects of the initiative. She suggested that it was undemocratic and that it was a method through which educational and test-making companies were profiting while many students remained unprepared for college-level work.

High school teachers Jennifer McDowall MA’14 and Sue Lehmann grounded their arguments in their personal experiences. McDowall, who teaches English in Norwich, discussed sample lessons, called modules, that are given to teachers to help ensure that the standards are met. She argued that they are impractical for use in a real classroom and so unrealistic in their expectations that they discourage students from reading.

Lehmann, on the other hand, is a mathematics teacher in Hamilton, and although she points to several problems with the system, such as the emphasis on testing and its relation to teacher evaluations, she is “in favor of the new standards. I use them as a guideline, not an end-all,” Lehmann said. “How can you argue with more rigor? More skills? For a math teacher, it’s everything I want.”

Gary Weeks, a retired teacher from the Sherburne-Earlville School District, agreed about the importance of setting high standards, but he believes that the changes implemented as part of the Common Core happened at an unreasonably fast pace. He suggested that this is what generated a lot of controversy, because it created stress among both teachers and students.

As a member of the curriculum development team at the Madison-Oneida Board of Cooperative Educational Services (BOCES), Jonathan Cornue was the strongest voice in favor of the Common Core. He argued that the complaints most people have are based on misconception and then stated that the standards are perfectly reasonable, the modules are mere examples, and tests are an important diagnostic tool meant to pinpoint where students need help.

Following the panel presentations, members of the audience commented and posed questions to the panelists. Many attendees discussed whether or not the Common Core works to meet the needs of students who learn differently or come from varied backgrounds.

There was no clear resolution, but the event helped shed light on the many complexities and nuances of the Common Core. It is an issue that political candidates will have to face as the public becomes more concerned about its impact, and this debate provided different viewpoints on the problems and prospects.