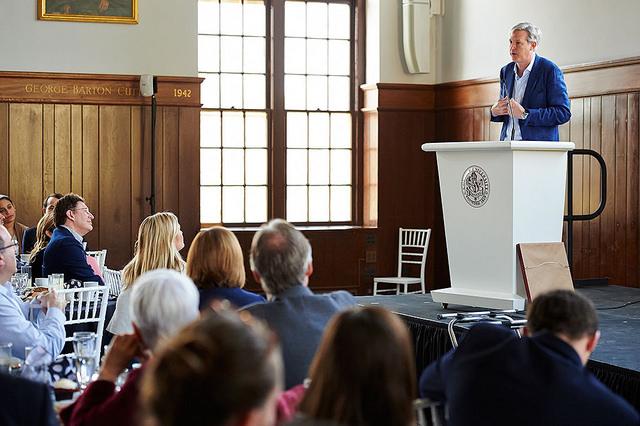 Julian Farrior ’93 speaks to the audience after receiving the Colgate’s inaugural Entrepreneur of the Year award. (Photo by Andy Daddio) In a Shark Tank-like session on Friday night, three student ventures, each with solid potential for success, were deemed worthy of a $5,000 investment from Chegg, via CEO Daniel Rosensweig P’15’17, who also is former COO of Yahoo.

On Saturday, the alumni community celebrated Colgate’s commitment to entrepreneurship at a luncheon attended by 325 Colgate community members.

“I got to Colgate, and this place allowed me to study philosophy. I studied art. I also went deep into mathematics,” Farrior said. “I realized I loved the creative process — that was the seed for a number of different choices I’ve made in my life.” Julian Farrior ’93 speaks to the audience after receiving Colgate’s inaugural Entrepreneur of the Year award. (Photo by Andy Daddio)

Those choices led him to create a number of different start-ups, culminating in Backflip Studios, which recently sold 70 percent of its shares to Hasbro for $112 million.

Finally, luncheon attendees turned their attention to Shark Tank II, a second opportunity for TIA students to present their projects ideas for potential funding. David Fialkow ’81, P’17, co-founder of General Catalyst Partners, acted at once as mentor and auctioneer.

Nine groups, one by one, delivered pitches and answered questions. After each one, Fialkow drew out the financial support that will help students turn their thoughts into action. Hands shop up in rapid succession, offering support in increments of $250 or $500.

Before the afternoon ended, Fialkow’s firm had invested $25,000 and he had helped raise nearly $20,000 more from the audience — investments that will go into ventures including Bus Path, which installs GPS devices on Colgate Cruisers, to ENGAGE, an educational program designed to improve educational opportunities for underserved youth in the Baltimore area.