Dani Solomon ’13 explores the connection between theater and science 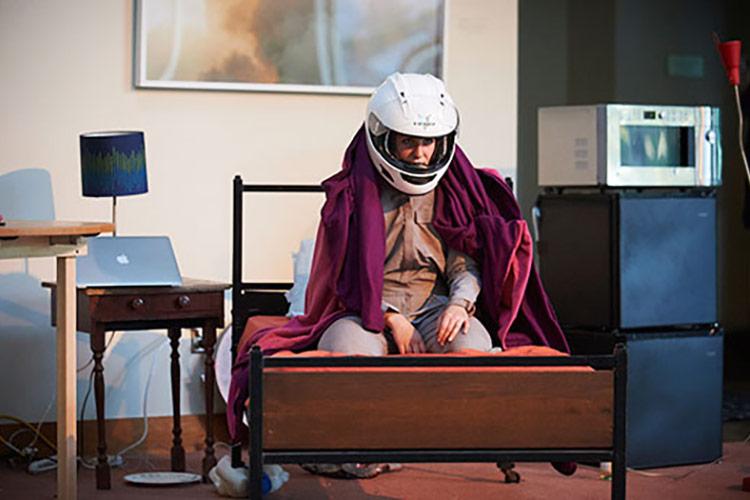 Real science fused with science fiction when Dani Solomon ’13 performed One Way Red, a solo show that followed a young woman’s one-way journey to Mars. The 90-minute performance on October 6 unfolded as Sam, played by Solomon, stumbled upon an online video about the Mars One project — an actual nonprofit that intends to colonize Mars by 2026.

The performance jumped back and forth between Sam’s bedroom, where she applied for the Mars One project, and the surface of the red planet. There were moments of both humor and profound loneliness as Sam left Earth to experience interplanetary adventures on Mars.

“We didn’t start with a script,” Solomon said. She and her collaborator, Mason Rosenthal, use an unconventional approach to theater in their work with Philadelphia-based Medium Theatre Company. “We start with a question or curiosity. We often start from a known, familiar place, and through the process of following a curiosity, we follow the known into the unknown.”

Space travel has long captivated American’s imaginations; One Way Red questions why we look spaceward and what we hope to find there. The possibility of interplanetary travel serves as the backdrop for this existential fever-dream populated by alien mirrors, talking lamps, and a sassy computer-assistant named Morgan.

“I think a lot of people in our generation want to do something exceptional to be remembered,” Solomon said. “This character has a lot of that drive, that ambition to do something great and historical.”

Solomon, who was a physics and theater major at Colgate, is interested in the process of discovery found in both the sciences and the theater. The play was performed in the Ho Atrium to mingle the arts and sciences and to allow the audience to enter an otherworldly space between reality and fiction.

In addition to performing the play, Solomon gave a talk about alternative career paths for physics majors. She and Rosenthal also hosted a workshop that encouraged students to explore unconventional approaches to theater.

Solomon hopes that there will be more intermingling of the arts and the sciences in the future, especially at Colgate. “Getting people from different disciplines to ask hard questions together is the next step toward interdisciplinary dialogue,” she said.