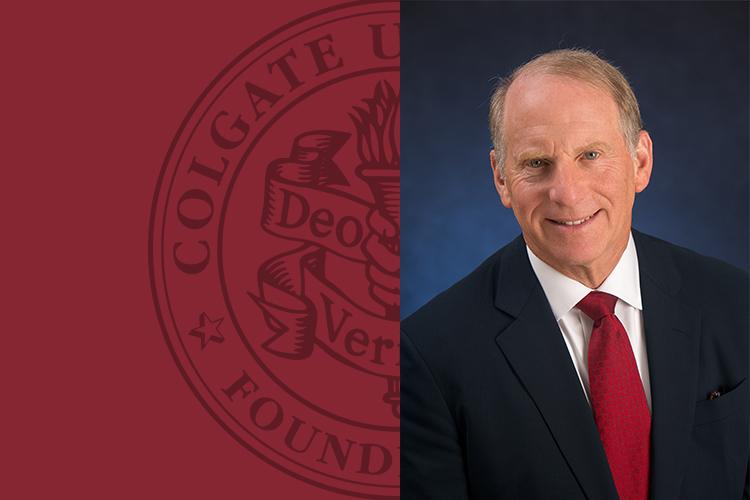 Richard Haass, president of the Council on Foreign Relations Richard Haass, president of the Council on Foreign Relations

Richard Haass, president of the Council on Foreign Relations, a leading independent, nonpartisan organization in the United States devoted to issues of foreign policy and international relations, will deliver the commencement address on Sunday, May 20, 2018.

In his 15th year as president of the council, Haass was previously the senior Middle East advisor to President George H.W. Bush and director of the U.S. State Department’s Policy Planning Staff, where he was a principal advisor to Colin Powell. He has also served as U.S. coordinator for policy toward the future of Afghanistan and as the U.S. envoy to both the Cyprus and Northern Ireland peace talks.

A recipient of the State Department’s Distinguished Honor Award, the Presidential Citizens Medal, and the Tipperary International Peace Award, Haass is also the author or editor of 13 books on U.S. foreign policy and a book on management. His latest book is A World in Disarray: American Foreign Policy and the Crisis of the Old Order. A Rhodes scholar, he holds master’s and doctor of philosophy degrees from Oxford University.

Haass will be joined by four others in receiving honorary degrees from the university during the commencement ceremony.

An atmospheric scientist whose research focuses on understanding what climate change means for people and the places where we live, Hayhoe has been named one of Time’s 100 Most Influential People and among Fortune’s 50 World’s Greatest Leaders. The host of the PBS digital series Global Weirding, she serves as a lead author for the U.S. National Climate Assessment, and has written more than 120 scientific publications as well as a popular book, A Climate for Change: Global Warming Facts for Faith-Based Decisions. She teaches in the Public Administration program at Texas Tech University and directs its Climate Science Center, which is part of the U.S. Department of the Interior’s South-Central Climate Science Center.

Kasparov came to international fame as the youngest world chess champion in history at age 22 in 1985. His matches against the IBM supercomputer Deep Blue in 1996–97 were key to bringing artificial intelligence, and chess, into the mainstream. A contributing editor to the Wall Street Journal, he is a frequent commentator on politics and human rights, and speaks about innovation, strategy, and peak mental performance to business audiences around the world. He was the featured lecturer for the Kerschner Family Series Global Leaders at Colgate series in 2010.

Former interim president; former provost and dean of the faculty;
Thomas A. Bartlett Chair and Professor of English Emerita at Colgate

One of the first women to teach at Colgate, Pinchin joined the English department in 1969 and went on to serve in most of the significant positions in the academic administration, including provost and dean of the faculty and vice president for academic advancement, as well as interim university president in 2001–2002. She was instrumental in establishing the Max A. Shacknai Center for Outreach, Volunteerism, and Education (COVE) and the Upstate Institute. In addition, she has been an active volunteer in several capacities, including the Community Memorial Hospital Board of Directors and the Bowdoin College Board of Trustees. Colgate’s Alumni Corporation created its Humanitarian Award in her honor in 2003.

Regis is founder of Swagger, an online cultural magazine and social media presence for millennials, and director of the highly regarded documentary film Duty Free. He has also worked as a social responsibility and eco-consciousness correspondent for MTV News and an on-camera contributor to CNN Headline News. In 2008, Regis created YOU(th) VOTE!, BET Networks’ award-winning multi-platform voting initiative. He was the keynote speaker for the graduating Class of 2018’s Sophomore Connections career exploration program.