A Conversation With Dianne Stewart ’90 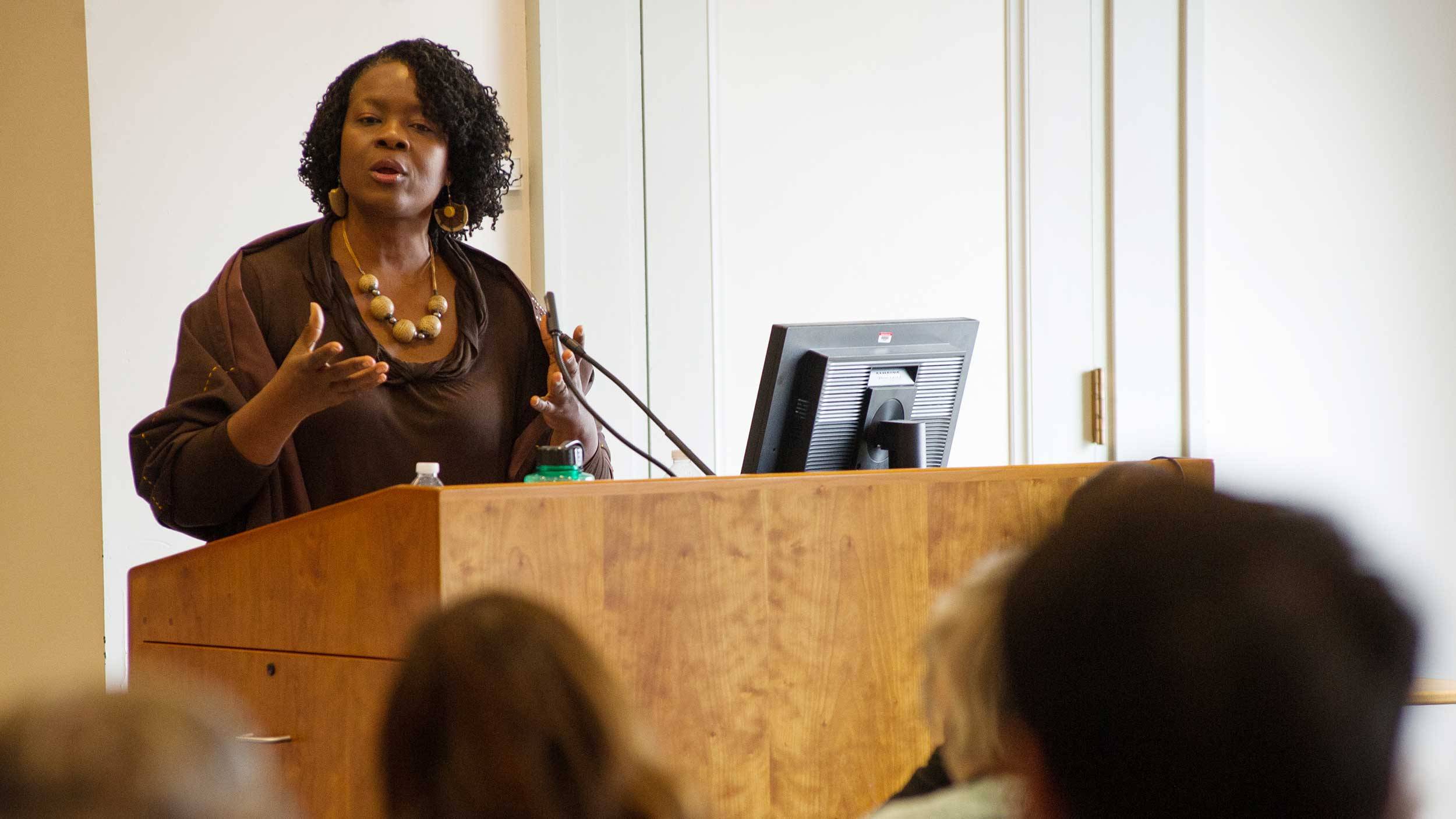 Colgate’s 2019 Alumni of Color scholar in residence, Dianne Stewart ’90, associate professor of religion and African American studies at Emory University, visited classrooms and delivered two public lectures as part of her two-week residency on campus last semester. A graduate of Harvard Divinity School with a PhD in systematic theology, Stewart specializes in African heritage religious cultures in the Caribbean and the Americas.

You came to Colgate as an undergraduate to do literature. How did you segue into African American studies and religion?

Even though I loved English, the field at that time was turning to high theory. I was more interested in narratives and their concrete historical and social contexts than in their value for abstract theorizing. Taking courses in the religion department also allowed me to explore narratives. I came to realize, too, that I could bring literature into the teaching of religion more easily than I could bring religion into the teaching of English.

I was trained theologically because I am interested in how people of African descent intellectualize and politicize their faith and religious cultures. To do this well, however, I used archives and ethnographic methods to contextualize and access the sources, symbols and meanings that provide orientation for religious subjects.

At Emory, you focus on religion, culture, and African heritage in the Caribbean and the Americas. How did you decide to pursue these fields?

I’m interested in intellectual exchange. I love excavating stories that have been buried. I like to solve mysteries and address justice in the process.

I have been engaged with African American studies or Africana studies broadly speaking, and there are so many mysteries to solve. People of African descent were muted in archives and written out of history. In the Americas/Caribbean, their cultures unfolded under circumstances that invited their very extinction. How did they withstand colonial intrusion and violation? How might we access their histories, cultures, and experiences? What is the connection between African heritage and the religious cultures of people of African heritage in the diaspora? These are the mysteries that I want to use the tools of all relevant scholarly disciplines to solve. And these are the questions that propelled me to pursue academia.

What teaching methods do you bring to your classes?

I teach African religious cultures in the Americas and the Caribbean, the black church, and the African American experience and black protest religions. I want my students to know about each of these trajectories because they provide a wider picture of black religious diversity and the historical underpinnings of religious formation in the African diaspora.

I want students to feel that they can be and should be invested in knowledge production — that they are not passively receiving the knowledge that other scholars have produced. I encourage students to write on topics of interest to them, even if their topics do not directly align with the subject we’re studying. I believe that when students have ownership of their research, they will produce better scholarship. It’s more important for me to teach students the skills of researching, summarizing, synthesizing, analyzing, and comparing through a process that totally captivates them and elicits their deepest investment. That is a very important pedagogical principle for me.

Did that pedagogical approach stem from your personal experience or did it develop as you learned to teach?

I would say more what I learned. Many high school students today have been taught to prepare for the test, but not taught to reflect innovatively, to engage with ideas through varied genres of writing. And so, in the classroom, I work extensively on my students’ writing.

What are your current projects?

I just finished writing a trade press book, Black Women, Black Love: America’s War on African American Marriage, which is scheduled for publication with Seal Press next year. The idea for the book emerged from the research that I had done for Black Love, a course I initially taught at Emory in 2004.

Colgate Provost and Dean of the Faculty Tracey Hucks ’87, MA’90 and I have published three articles together already. In our research, we want to push back on a misconception in black popular culture and consciousness: that slavery stripped people of African descent of all their culture and heritage.

It was not the period of slavery that stripped African descendants of their culture. It was the period after slavery, the period of the ‘politics of respectability.’ It was during the post-Emancipation period that liberal white missionaries and the black church missionaries from the north were rushing down south to de-Africanize the population, to prepare them for assimilation and citizenship.

The struggle and the burden for African American intellectuals and leaders was, “How do we prove that we can be good citizens?” We prove it by adopting the right religion, by showing that we are good, faithful Christians, who are also law abiding democratic citizens. Most are surprised to learn that, for almost the entire slave period, most African descendants were not Christian, and as we know, they certainly were not citizens.

What do you want Colgate students to take away from your visit last semester?

I want students to think about slavery as a very complicated space for African identity formation and religious formation. We don’t think enough about the ‘syncretisms’ that were happening among the African captives themselves, those who were transported to hostile foreign environments. They brilliantly blended their resources to design identities and customs that reflected their African heritage and redefined what it means to be human. I want to shake up some of the assumptions and mythologies that students have received in our culture and classrooms.

Studying Africana religions, civilizations, cultures, and histories — it matters. It’s important to understand the epistemologies, theologies, cosmologies, and the ways of life that have come down to people of African heritage and to this wider nation as a result of the involuntary presence of African descendants in this country.