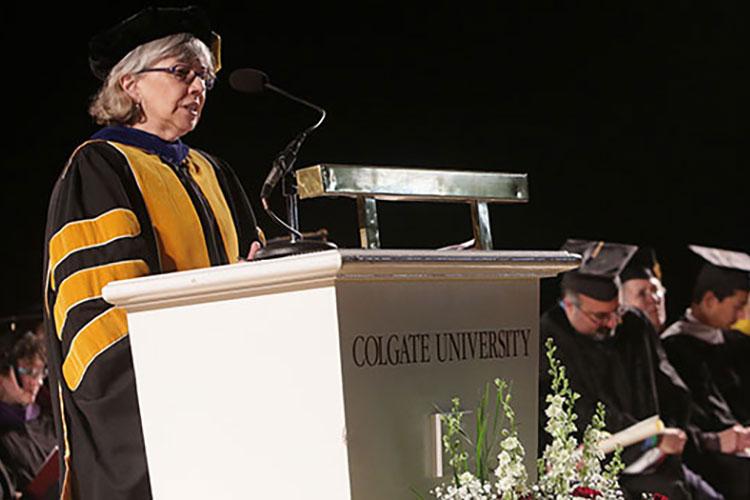 Welcome, and congratulations to all of you for your accomplishments. You are about to join a lively community of over 30,000 people who have the special distinction of being alumni of Colgate University. I have learned that among the grandparents here today, there are 13 (of course!) who are themselves Colgate alumni. So let us take a moment to thank the grandparents, and parents, and family, and friends who helped to make this day possible.

This is the 195th commencement at Colgate. The first took place in 1822, and it was very different from what we will see today. For one thing, graduation in 1822 began with a public final examination, as members of the class were questioned in Latin, geography, astronomy, rhetoric, moral philosophy, and other subjects in front of their families and the local townspeople.

On the second day of graduation (because it lasted for two days), seniors and juniors gave speeches — some 14 speeches during that first graduation, and they could last anywhere from 20 minutes to an hour each. The students were showing off their knowledge, but also displaying their ability as ministers in training, because Colgate began as a Baptist missionary training school but with an emphasis also on general education. One of the speeches of 1822, by one of our most distinguished early graduates, Eugenio Kincaid, was titled “The Utility of Science to a Gospel Minister,” anticipating some of the major intellectual debates of the later 19th century.

As you have heard many times, Colgate was founded by 13 men with 13 dollars and 13 prayers. The 13 were all reasonably prosperous men, but driven largely by their sense of religious purpose; they founded the Baptist Education Society that became the Hamilton Literary and Theological Institution, and then Madison University, and then, in 1890, Colgate University.

The 13 founders risked some disapproval from their fellow Baptists, many of whom believed that all one needed to be a minister was Bible knowledge and divine inspiration, not the broad theological and general learning that the 13 were proposing. But they embraced a very typically Enlightenment idea, a faith in the power of education to transform individuals and strengthen them in their work – a bold and ambitious determination.

Colgate has changed and grown over the years; it ceased to be a seminary and became a university devoted to the ideal of a liberal arts education. We have learned more about those changes as we have researched our history for the bicentennial in 2019, and we have found evidence of a college that evolved beyond the small numbers of central New York men who formed the core. In 1848, Samuel J. Smith, both Indian and British, was the first known graduate from Asia, not only at Colgate but perhaps in the United States as a whole; he returned to Asia, and became a well-known book publisher in Thailand. Our first known African-American graduate, in 1855, was Henry Simpson, who became famous as a minister and abolitionist; his graduation speech topic was “Wilberforce,” about the leading British anti-slavery activist.

But history is not just about the distant past. Those of you here before me have made history — Colgate history — by your actions, your passions, your sense of what it means to be a citizen of this region or the world. Whether you exhibited your research project in the summer poster session, or authored a thesis in the social sciences or humanities; whether you were a student of dance or an actor on the stage of Brehmer Theater; whether you were an activist on behalf of racial justice, or against sexual violence, or a CL or Link, you have contributed. And many of you have kept alive Colgate’s traditions: as part of one of our athletic teams, as a singer in one of our a cappella groups, or as a member of our student government. I can only name a few of the ways in which you have affected this place, but you have all been a part of Colgate’s identity, in one way or another, for the past four years, and have helped to write the latest chapter of its history. Those of us who have been here for many years, as faculty members or as administrators, know that Colgate takes its identity and its life from present, past, and future students; and we can only applaud the creativity and excitement that you have brought here during the past four years.

So Colgate has grown and changed over the course of its lifetime, even as we remember our past. We still use West Hall, built in 1827, our oldest building — but where once it housed the entire college, including the chapel, it is now a residence hall. And we don’t force every graduating senior to make a speech anymore — and since there are nearly 700 of you, that is a very good thing — but we still think of graduation as a moment of thoughtful reflection. On this important day, you are looking ahead — to a job, to further study, to a fellowship, to a year spent in exploring your options, to starting a career.

I want to leave you with two thoughts. First, a sense of place and tradition. The area that encompasses Colgate, especially the hill, has been home to an institution of higher learning for nearly 200 years. That is a firm grounding; it is one to which you can return, and we hope you will, and often. The second thought is that Colgate has changed over the years, and so will you. Sometimes change will be forced upon you, sometimes you may reach out for it. We are confident that you have the solid foundation to meet and embrace every change; and we wish for the very best for all of you as you set out on this wonderful journey.