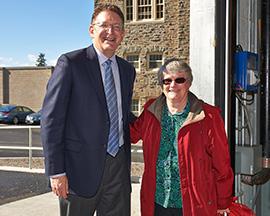 Colgate President Jeffrey Herbst and Hamilton Mayor Margaret Miller spoke about the cooperation that led to the introduction of natural gas to the campus and community. (Photo by Dylan Crouse ’15) One of the two new natural gas boilers is seen at the heating plant. (Photo by Dylan Crouse ’15)

A renovated heating plant that for the first time will use natural gas as a fuel option will significantly reduce the university’s carbon footprint and provide increased flexibility for heating campus in the years ahead.

In about two weeks, after a series of diagnostic tests, the university will deploy two new boilers that replaced three units that burned No. 6 fuel oil, one of the dirtiest types of fossil fuels.

This upgrade means far less carbon emissions and other pollutants being produced at the plant, according to John Pumilio, director of sustainability.

“This will reduce the campus carbon footprint by an estimated 1,200 tons a year, open the door for future efficiency and renewable energy projects, and will likely reduce our annual expenditures on energy,” said Pumilio.

The new boilers will come online when temperatures dip and the main heating system — a wood-fired boiler — needs additional capacity to generate the steam that provides heat and hot water for campus.
The wood-fired boiler will continue to be the primary source of energy on campus, processing approximately 20,000 tons of locally and sustainably harvested wood chips per year. It saves Colgate $1.8 million in heating costs each year when compared to a fuel-oil system, and avoids 13,800 tons of emissions from being produced.

According to Joseph Bello, manager of capital projects, and Dan McCoach, heating plant manager, adding the cleaner-burning natural gas option will reduce operational costs and add flexibility to a system that runs 24 hours a day, 365 days a year.

The new boilers are part of an $8.4 million expansion and renovation of the heating plant that was approved by the Board of Trustees in January 2013. Colgate President Jeffrey Herbst and Hamilton Mayor Margaret Miller spoke about the cooperation that led to the introduction of natural gas to the campus and community. (Photo by Dylan Crouse ’15)

The introduction of natural gas as a fuel source is the culmination of years of collaborative work with the village of Hamilton, which led the effort through its creation of a not-for-profit municipal gas utility.

The utility connected to a national supply line that is about eight miles north of Hamilton, and built a distribution system along Route 12B and into the village.

The university, along with Hamilton Central Schools and Community Memorial Hospital, committed to being customers of the utility, making the project financially viable.

On Friday, October 24, Colgate President Jeffrey Herbst, Hamilton Mayor Margaret Miller, and other university and village officials gathered to mark the flow of natural gas into the Colgate system for the first time.

“Not only is this an important step in our commitment to be carbon neutral by the year 2019, but this project is of great value to our neighbors throughout the village of Hamilton,” said Herbst.

Miller echoed that sentiment, calling it a historic day for the community and thanking Colgate for its commitment to the project as an “anchor customer.”