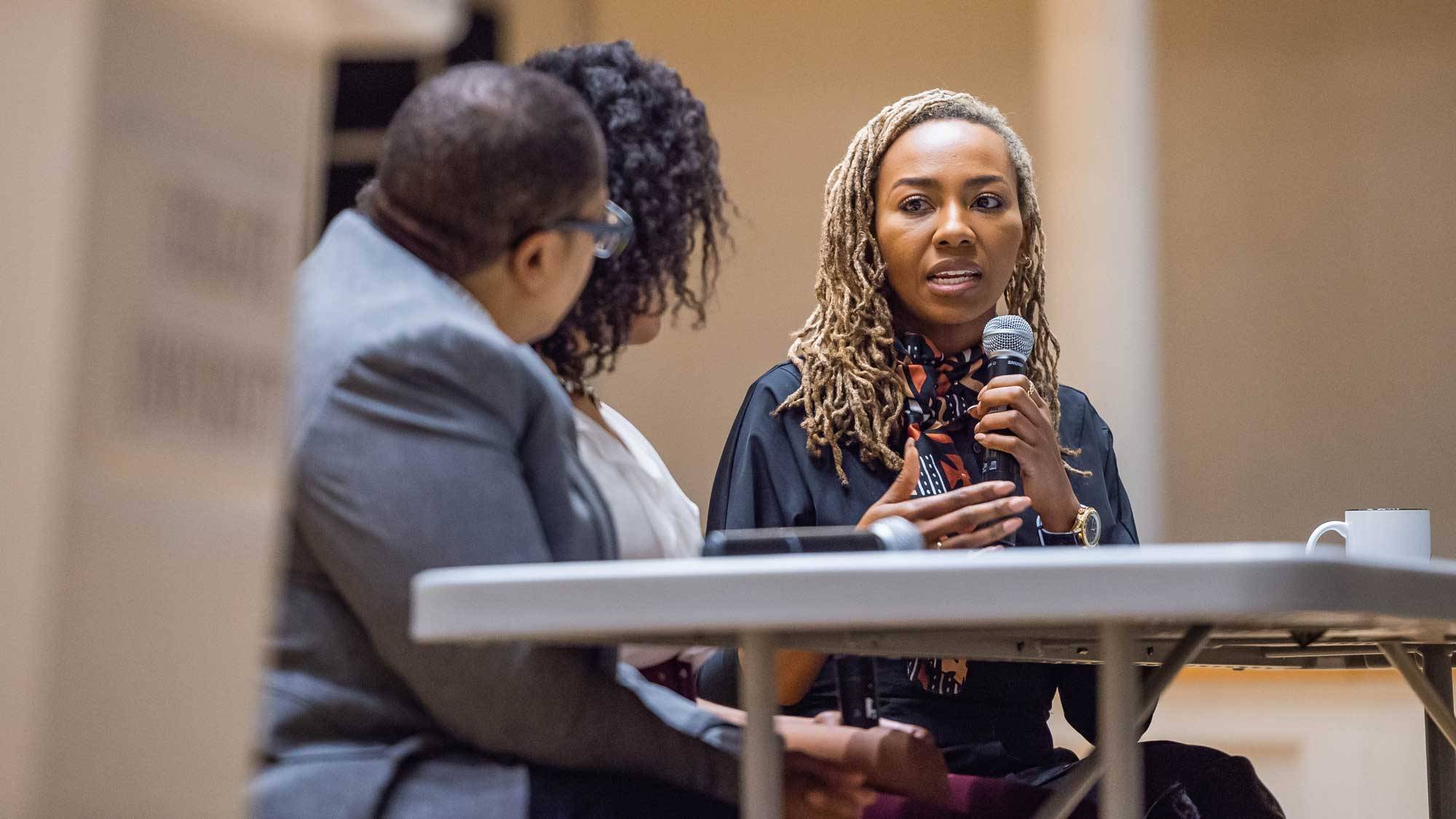 Students and members of the Colgate community attend the MLK 2020 Keynote Address: A Conversation with Opal Tometi in the Memorial Chapel, Jan. 30, 2020.

Tometi established Black Lives Matter alongside Alicia Garza and Patrisse Cullors to fight racial discrimination and violence against black communities following the 2013 acquittal of George Zimmerman in the murder of 17-year-old Trayvon Martin.

“I wanted all black people to know that [George Zimmerman’s] acquittal did not mean that their lives didn’t matter,” Tometi said in her keynote, which included a Q&A session with students, moderated by Visiting Assistant Professor of History T. Dionne Bailey and Taylor Dumas ’20.

Tometi’s appearance, sponsored by the ALANA Cultural Center, was the final event in an extensive celebration that began with an opening ceremony on Jan. 20, featuring Thomas Bennet ’72, board member of the National Abolition Hall of Fame in Peterboro, N.Y., and Christian Johns ’20, co-president of SGA and this year’s student keynote speaker. 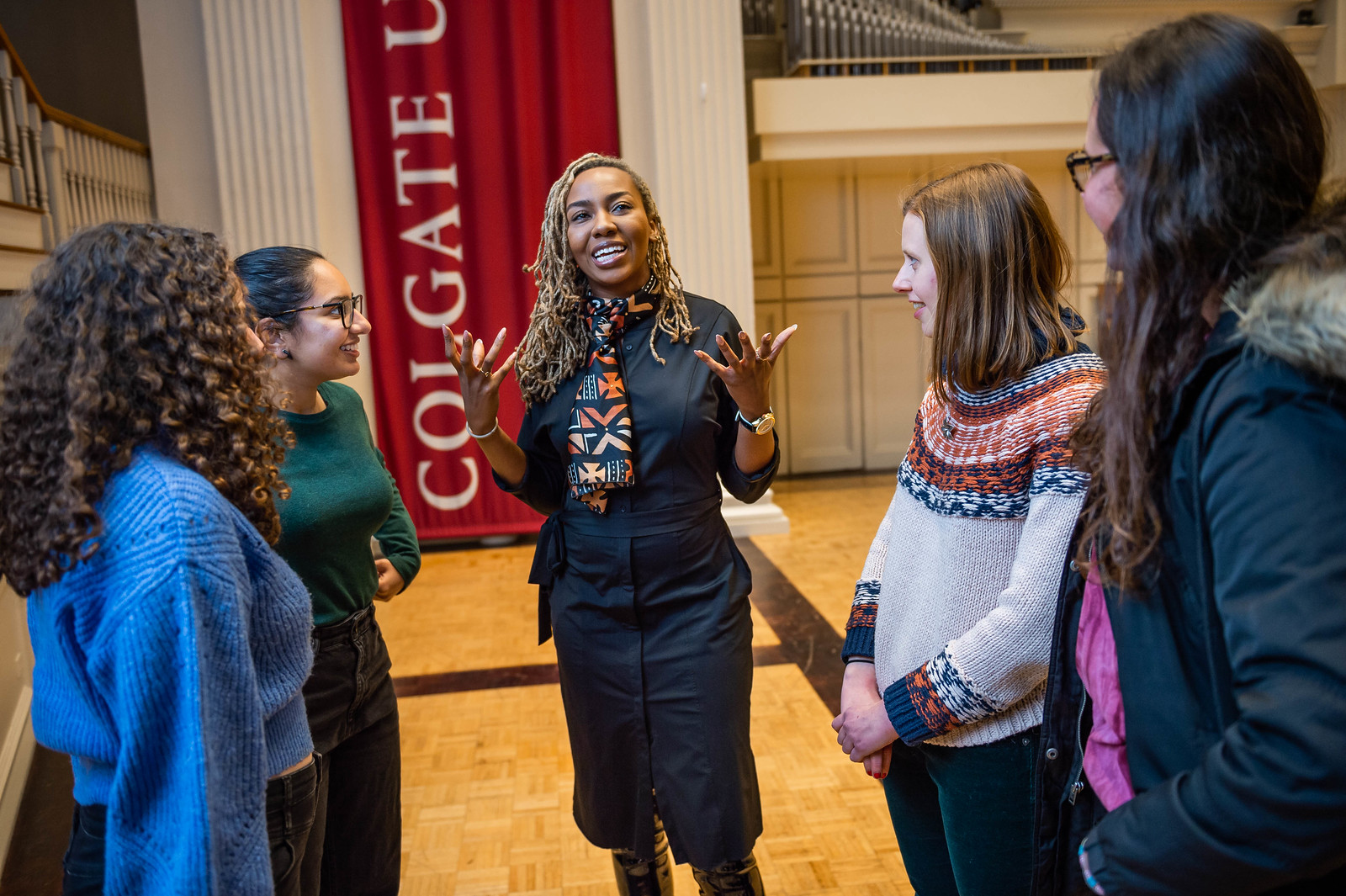 Bennet spoke about the abolitionist movement and its roots in central New York, urging the community to remember the histories of extraordinary abolitionists, to “celebrate the light and vision of MLK,” and to strive for a “beloved community.” Johns urged the Colgate community to consider that, “In this world that can be so cruel and unyielding, we have to love each other to the best of our ability.”

The ceremony also featured performances by Grace Darko ’22, Juan Saenz ’20, and Assistant Director of the ALANA Cultural Center Esther Rosbrook. Rosbrook and Saenz performed the song “Lean on Me,” by Bill Withers, inviting the audience to join in on the singing and ending the production with the entire crowd taking part in the shared revelry.

During the course of the next week and a half, students, staff, and faculty participated in the MLK Day of Service, a program hosted by the Max A. Shacknai COVE. They attended brown-bag conversations on topics such as “Community Accountability” at the Center for Women’s Studies as well as “The Barriers People of Color Must Overcome to Thrive at a PWI” and “The Privilege of Self Care” at the ALANA Cultural Center. They enjoyed a Unity Dinner to reflect on how faith, service, and identity intersect and align with MLK’s vision.

Gathered together in Memorial Chapel on Day 10, reflecting on the experiences of the week, community members heard Tometi’s call to take action in fighting for marginalized communities.

“Black Lives Matter is continuing the work of our ancestors,” Tometi said. “There is no such thing as a post-racial society. I feel like I do not have a choice but to do something. It is one thing to say or tweet something, but what are you actually doing?”