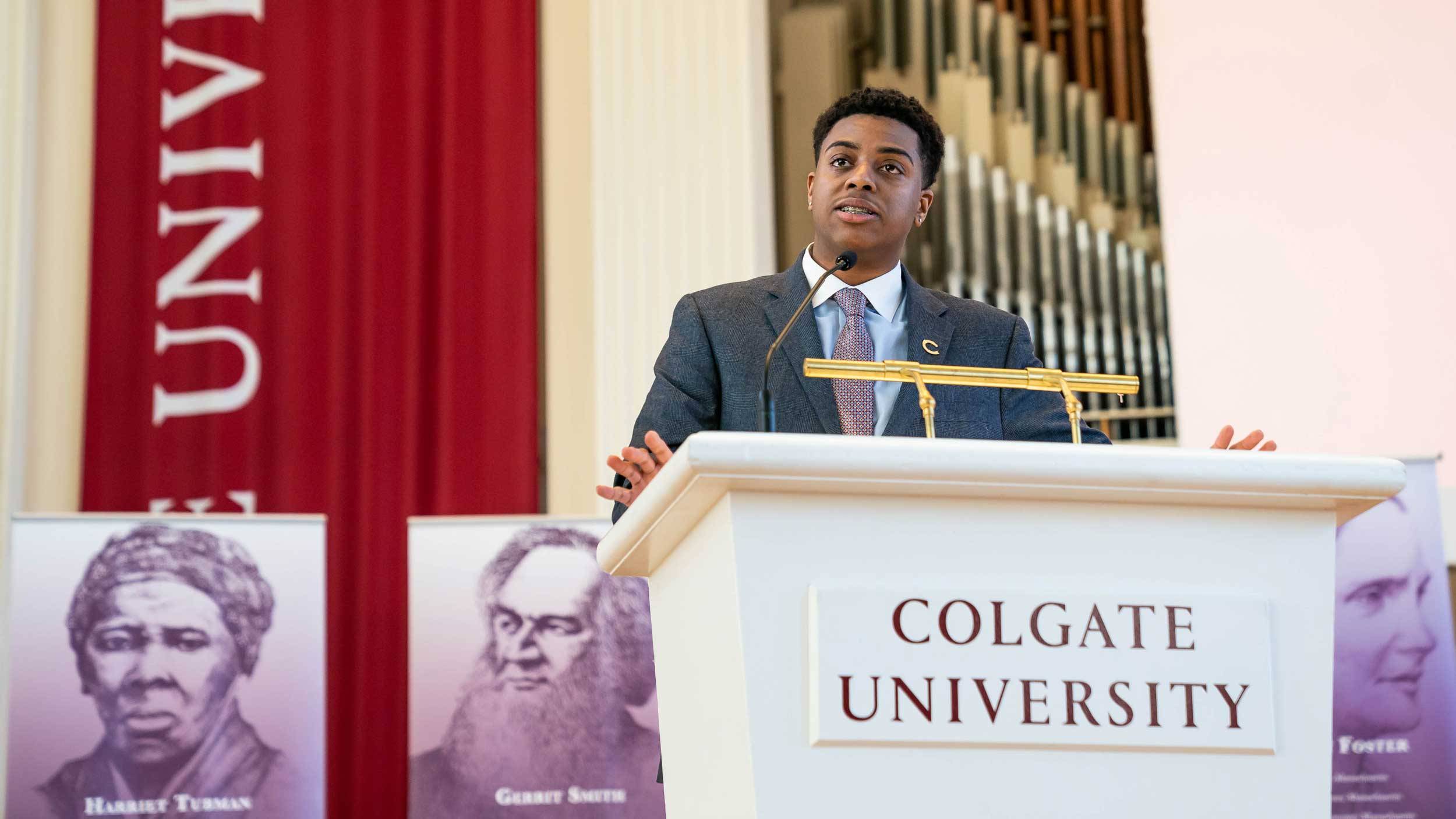 The following citation was presented by Colgate University President Brian W. Casey to Christian Johns ’20, winner of the Colgate Alumni Corporation 1819 Award. The presentation of the 1819 Award typically takes place during Colgate’s annual awards ceremony, which closes out the academic year. While this year’s awards ceremony has been canceled, the 1819 tradition continues.

The Colgate Alumni Corporation 1819 Award is the University’s highest student honor, given to the graduating senior “whose character, scholarship, and service to others best exemplify the spirit that is Colgate.” This year’s recipient is the first to carry these traits into our University’s third century. He has earned a position both at the forefront of his class, and at the head of a new generation of award winners, who will follow him into the annals of Colgate history. This year’s recipient is Christian Blake Johns.

Christian once said, “Colgate has taught me that, in order for things to get done, I must be intentional.” In honor of that truth, we list his accomplishments with equal intentionality.

From that position of leadership, he delivered the 2020 Martin Luther King Jr. celebration keynote address and called on his fellow students to broaden their conception of community. “We sometimes forget that we are brothers and sisters in a common struggle for economic, social, religious, and political freedom,” he said.

Away from his bully pulpit, Christian has demonstrated a commitment to scholarship, pursuing a double major in political science and African American studies. He is listed regularly among recipients of the Dean’s Award for Academic Excellence. His spirit of inquiry has led him to conduct research projects both in and out of the classroom — on the politics of race and ethnicity as they relate to the efficacy of Head Start programs; the implications of mayoral policies on black residents of Chicago; and even the places at Colgate where students of color feel most, or least, welcome.

Service to others is built into his Colgate experience and into Christian’s personality. In his executive roles with BSU and Brothers, for example, he helped to plan significant events that nurtured community and tradition: BSU trips to meaningful places and conferences, guest lectures by national figures, and even moments of activism. He took on these duties, knowing that bonds of connection cannot be forged without individual effort. “I felt the weight of being responsible for the events that created community on campus,” he said. And yet, “My joy originates from service, from giving back to the people and communities who build me up every day.”

Pouring himself into this University, setting an example both academically and interpersonally, holding us all accountable to each other during the course of four arduous years — all of this has earned our recipient the respect of his peers and a place in University history.

On behalf of Colgate, we all join in the statement made by a classmate, who said in her nomination letter: “I cannot imagine the 1819 Award going to anyone beside Christian Johns.”