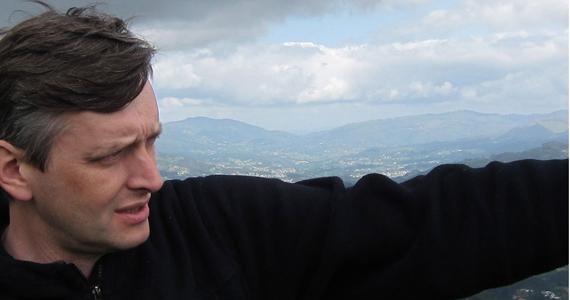 Filmmaker Segei Loznitsa will be coming to Colgate in November. Filmmaker Segei Loznitsa will be coming to Colgate in November.

A longstanding collaboration between Colgate University and the world-renowned Flaherty Film Seminar, which brings nearly 200 filmmakers, scholars, and programmers to Colgate each summer, has spurred creation of an on-campus residency program that will begin this fall.

The Colgate/Flaherty Distinguished Global Filmmaker Residency will bring acclaimed Russian filmmaker Sergei Loznitsa to the university for an intensive weeklong exploration of film and filmmaking.

During the first week of November, Loznitsa will hold a series of interdisciplinary screenings and lectures that are open to members of the campus and local communities. The filmmaker also will meet with students in smaller groups, both in and outside the classroom.

Loznitsa is well known for numerous award-winning documentaries, many of which depict changes in Russia since the dissolution of the Soviet Union.  His two feature films, My Joy (2010) and In the Fog (2012),  both premiered at Cannes.

In addition to the campus residency, the partnership between Colgate and the Flaherty will support a screening of Loznitsa’s work on Monday, November 3, at Anthology Film Archives in New York City as part of  Flaherty NYC, a seasonal screening series.

“This evolving collaboration will provide our students with an opportunity to directly engage with a highly regarded documentary filmmaker,” said Mary Simonson, director of the Film and Media Studies Program. “We have a strong history of alumni and faculty doing important work in this field, and this residency program will build on that.”

Simonson said the residency program will run three years, thanks to support from the Office of the Provost and Dean of the Faculty and the Christian A. Johnson Endeavor CORE Fund.