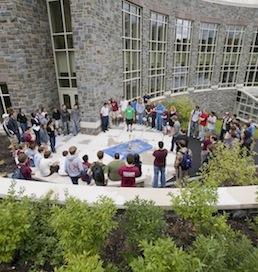 To mark the successful end of Passion for the Climb: The Campaign for Colgate, President Jeffrey Herbst and 26 members of the Colgate University community rang this morning’s opening bell at the New York Stock Exchange. It was a moment of triumph for a university that raised $480 million, surpassing its initial $400 million campaign goal by 20 percent.

“Passion for the Climb has enjoyed the full and passionate participation of students, faculty, alumni, parents, and friends,” said Denis Cronin ’69, P’09, P’10, former campaign chair and current chair of Colgate’s Board of Trustees. “On behalf of the board, I thank all those who have contributed to this transformative, collective effort.” That total — the second-largest campaign ever completed by an American liberal arts college — is greater than all five of Colgate’s previous campaigns combined and includes $141.5 million for financial aid. In spite of a global recession that began only months after Passion for the Climb’s March 2007 kickoff event, 82 percent of all alumni participated in the effort. More than 1,000 people contributed $25,000 or more, and 10,934 made gifts of $250 or less.

“It is a testament to our thoughtful and generous community that, together, we prevailed over so many economic obstacles,” said Murray Decock ’80, vice president of institutional advancement and campaign director. “The realities of the recession only strengthened our resolve.” Students gather at Case Library and Geyer Center for Information Technology, which was opened through the success of the Passion for the Climb campaign.

Passion for the Climb was designed to fund a wide-ranging strategic plan that amplified Colgate’s liberal arts mission through advances in endowment, infrastructure, research, curriculum, leadership programs, and more.

“Unlike many of our peers, Colgate successfully focused on enhancing its endowment resources,” said campaign chair Jim Elrod ’76, P’04, P’05, P’12. “This campaign was about building upon our long-term fiscal strength as we seek to attract the most qualified students and provide them the best education possible.”

Recognizing that access to a top-tier, private liberal arts college experience is still out of reach for too many students, Colgate initially set — and quickly achieved — a preliminary goal of $87.5 million for financial aid.

After the campaign reached its initial $400 million goal 18 months ahead of schedule in January 2011, Herbst used the momentum to announce a new challenge, called Forty for the Climb, to raise an additional $40 million for financial aid before the fiscal year ended on June 30, 2012. Shortly thereafter, 90 leadership investors put forward the first $20 million in the project and encouraged others to match their gifts. When the campaign officially closed, Forty for the Climb had raised $54 million, exceeding its own new goal by 35 percent.

“Financial aid is the critical priority for Colgate in the years ahead,” said Herbst. “By expanding access, we open our classrooms to diversity of thought and background — and we ensure that the university is able to admit the world’s brightest undergraduates regardless of their financial means.” Students perform an experiment at the Robert H.N. Ho Science Center – opened through the success of the Passion for the Climb campaign.

Investments have also enhanced student life and academic excellence. The Kerschner Family Series: Global Leaders at Colgate, which has welcomed President Bill Clinton, the Dalai Lama, and other international figures to campus, was launched in 2007. The campaign also created the Benton Scholars program for top students who spend four years pioneering a rigorous leadership-development program on campus and abroad.

Alumni and parents endowed faculty chairs, centers, and institutes that have expanded Colgate’s academic reach into politics, economics, wellness, community development, leadership, and the sciences. Campaign funds also helped to form theme communities for residential students and to send more students and faculty around the world.

Passion for the Climb reaffirmed Colgate’s commitment to Division I athletics by endowing coaching positions in men’s soccer, swimming and diving, men’s hockey, and football. It also made capital improvements to Andy Kerr Stadium and Tyler’s Field.

Because Colgate celebrates Colgate Day on every Friday the 13th (the university was founded by 13 men with 13 dollars and 13 prayers) and because of its victory over the economic recession, the chosen date and Wall Street location were appropriate for its campaign close announcement.

“The success of Passion for the Climb, in the face of a global recession, speaks volumes about the institution and the historic loyalty of the Colgate community,” Herbst concluded.