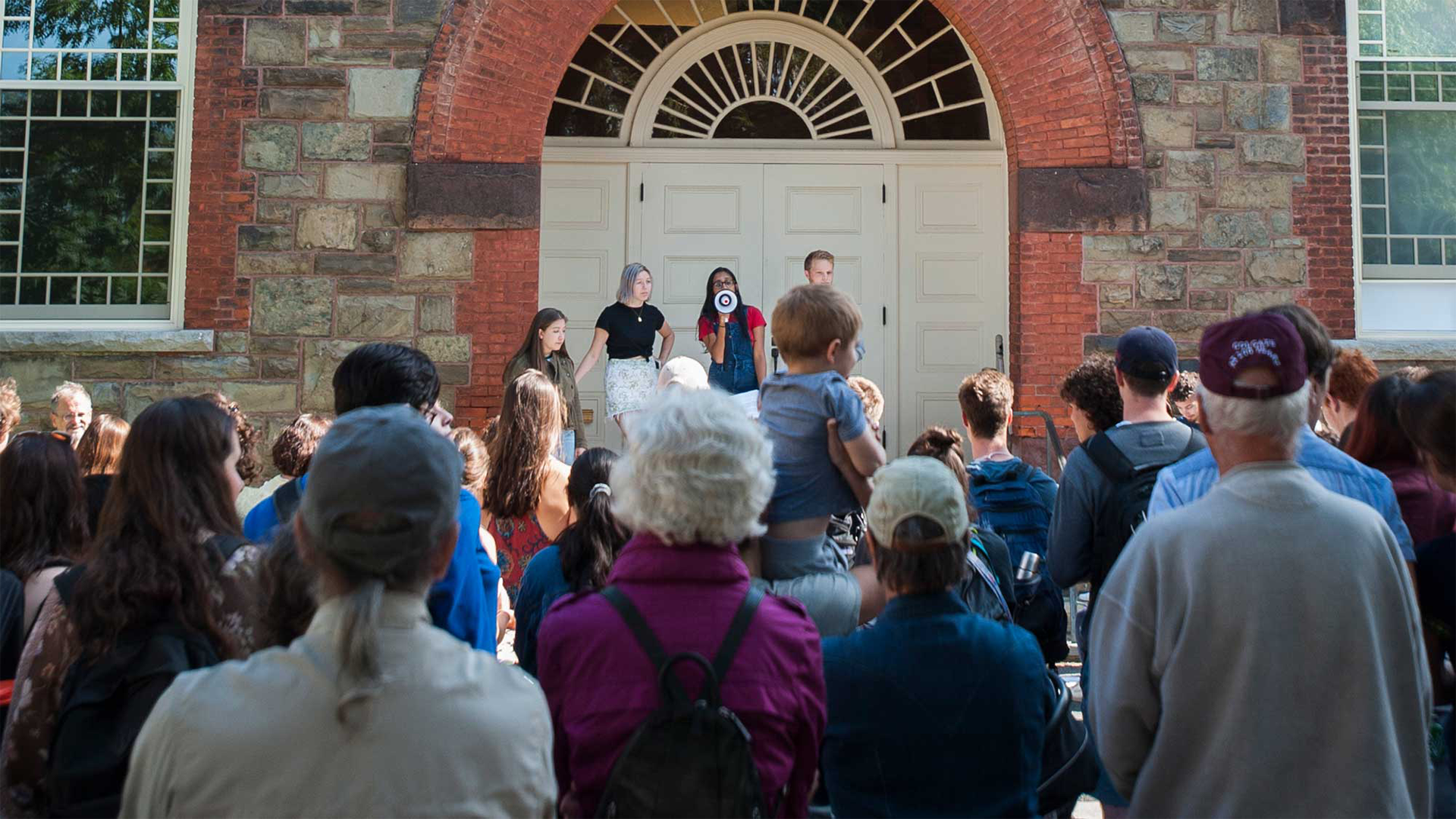 The leaders of Students for Environmental Action speak to the crowd at Colgate's climate strike.

Chants such as “There is no planet B, make our campus plastic free,” and “System change, not climate change,” echoed across the academic quad on Friday, September 20 as students, faculty, staff, and community members participated in a campuswide strike for climate change. Students for Environmental Action (SEA) organized the strike to coincide with the national climate strike just three days before an emergency U.N. Climate Change Summit in New York.

The strike began in front of Hascall Hall with students eagerly displaying signs that read, “What I stand for is what I stand on,” and “Without habitable earth no other issue matters” among other slogans. SEA Co-President Jaanvi Sachdeva ’20 began by contextualizing the event, acknowledging Swedish climate activist Greta Thunberg’s school strike in front of the Swedish parliament as the start of a movement of youth climate activists striking. The crowd erupted as Sachdeva announced that Colgate’s strike was part of the largest mobilization for climate action in global history.

With that, SEA Co-President Kate Hinsche ’20 led the crowd around the academic quad with an array of colorful chants before the group encircled a massive inflatable earth. Hinsche asked attendees to share why they had come, bringing a megaphone to the intergenerational respondents. People mentioned saving glaciers, polar bears, disproportionately affected minorities, and their grandchildren; preventing the sinking of one’s home country of Bangladesh and ending the outrage of an ongoing Superfund site in another's New Jersey hometown. Many speakers emphasized the need for action both on campus and internationally.

“We are situated in a wealthy liberal arts university brimming with professors and students who are at the forefront of climate change,” Daniel Dougherty ’21 said. “If we are not the group of people who try to effect systemic change and sustainability in our own environment, who will?”

The crowd moved to the front of Memorial Chapel, where Sachdeva explicitly signaled to the university what SEA and those striking want done in the near future. The strike coincided with the submission of a petition demanding that new campus construction be energy and carbon neutral; that campus should be powered by 100-percent renewable energy and completely plastic-free by 2025; that campus and Seven Oaks golf cart fleets should be electric; and synthetic pesticides and fertilizers should be eliminated from campus and the Seven Oaks golf club. The petition currently has more than 800 signatures.

Nancy Ries, professor of anthropology and peace and conflict studies, spoke about the ecosystems that are currently unraveling around the world and the resulting anger.

John Pumilio, director of sustainability, spontaneously decided to speak at the end of the event, evidently moved by the crowd’s passion.

“I was born and raised here in central New York and have spent ten years on the Colgate campus. I can say that this is most definitely my proudest moment and the moment I’ve been most inspired,” he said.

Pumilio addressed Colgate’s carbon neutrality, the reforesting of the main campus and preservation of the more than 1,000 acres surrounding it, phasing out of pesticides and fertilizers, and President Brian Casey’s support in making the campus plastic-free.

“There is no doubt in my mind that we can achieve [a plastic-free campus] and the other goals you set if we just have the will to,” he said.

SEA Co-Vice President Victoria Basulto ’21 ended the event by urging attendees to sign the petition and attend the upcoming week of SEA events, which included an informational table about Meatless Mondays, collectively walking up the hill rather than taking cruisers, and penning letters to elected officials.

“This is just the beginning,” Pumilio said. “We have a long way to go.”