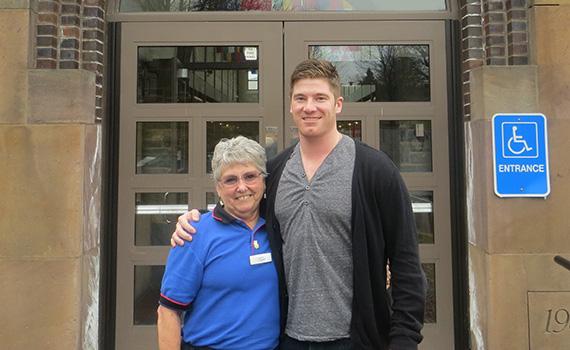 The Colgate community has shown overwhelming support of Frank Dining Hall cashier Jean Brooks as she battles cancer. In the past month, $35,529 has been raised through a GoFundMe.com campaign set up by Christian Long ’13 in order to help with Brooks’s treatment expenses beyond what insurance covers.

Since the opening of Frank Dining Hall in 1984, thousands of students have been greeted by Brooks’s infectious smile and charm. Over the years, she has become a fixture of the Colgate community and one of the most recognizable faces on campus. She has built and maintained relationships with both current students and alumni, all of whom she fondly refers to as her “children.”

In February, Brooks, 70, was diagnosed with cancer. At Colgate’s Relay for Life in March, she was the guest of honor as students rallied to raise money for cancer research during a 12-hour walk-a-thon. When members of the 2013 hockey team later found out about Brooks’s diagnosis, they collaborated among themselves and reached out to alumni to figure out how the Colgate community could help.

“Jean has always supported us at the hockey rink, so we feel an incredibly close connection to her,” said Long, a former member of the hockey team. “I’ve known her since my first day at Colgate, and I could always count on her for words of encouragement after a bad test or game.”

Long set up the fundraiser on April 7, and in less than 24 hours, $21,000 in donations had already been pledged.

“It’s beyond amazing,” said Brooks, adding that she’s still stunned by the number of donations. “I wish there was some way to thank each person wholeheartedly. It’s a huge burden that’s been lifted. There’s just not enough thanks to know that the only fight I have now is the cancer.”

And Brooks is certainly determined to win this battle, especially with her daily support system of Frank visitors.

“I always say, ‘when this becomes a job, then I’ll retire.’ The wonderful people I’ve met are the best part of the job,” Brooks said.

The response of the Colgate community has far surpassed Long’s expectations and, as he explains, is indicative of the close-knit relationship among students, alumni, and staff. Long’s goal for the fundraiser is $50,000, which hopefully will cover Brooks’s out-of-pocket expenses for treatment for the rest of her life.

Even with her diagnosis, Brooks still has her characteristic smile and energetic personality.

“I almost feel guilty being happy because, after all, I do have cancer,” she said. “But, here I am smiling because if anything can be good about this situation, it’s the people.”