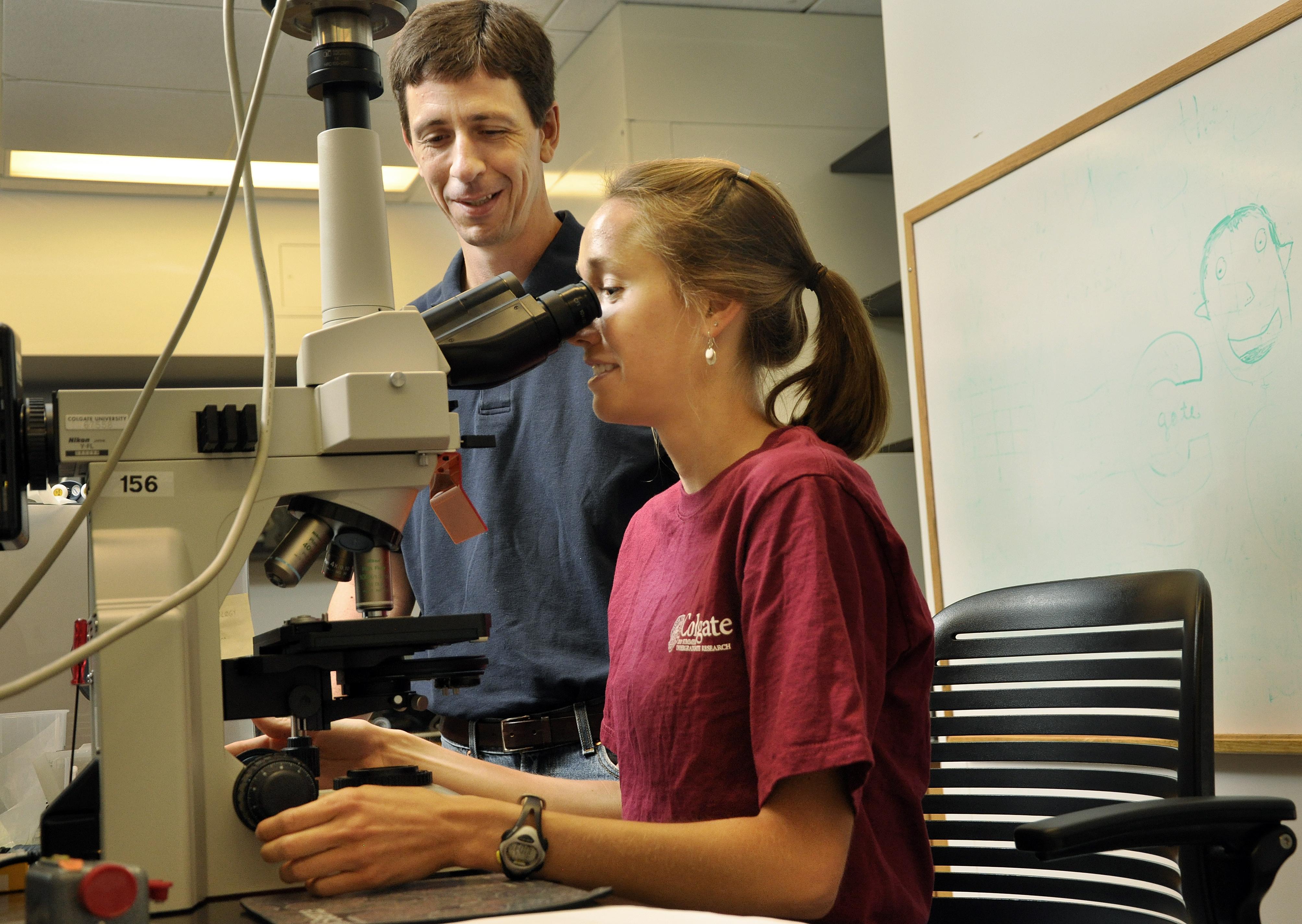 Biology Professor Ken Belanger helps a student in the lab.

Ken Belanger, Raab Family Chair and associate professor of biology, has received another prestigious grant that builds on the biology department’s momentum and further expands the research opportunities on campus for undergraduate biology students.

In 2008, he was also a member of a team of Colgate collaborators who received a $1.2 million grant from the Howard Hughes Medical Institute (HHMI) that resulted in, among other things, support for Colgate students to perform summer research on Colgate’s campus and at the NIH, funding for collaborative student-faculty projects in Colgate’s 3D Visualization Lab, and the addition of a faculty member shared between the biology and math departments to teach courses and undertake research in systems biology.

The burgeoning interdisciplinary field of systems biology requires that students not only understand biological science, but also computation and mathematics in order to analyze vast amounts of biological data.

Belanger’s most-recent grant, for “Analysis of the Role of FG Nucleoporins in Nuclear Protein Export,” will help generate some of that data.

It will help pay for expensive fluorescent microscopy equipment and molecular biology supplies that are needed for his research, which is relevant to how cancer develops and spreads.

“Our cells carefully regulate what specific proteins get in and out of the nucleus,” said Belanger, who uses yeast to study how molecules move inside cells. “People have a pretty good handle on how these proteins get transported into the nucleus, but not as good an understanding of how they get out.”

The NIH grant, in the amount of $325,282 for three years, also will fund students in Belanger’s lab this summer, in a research tutorial next spring, and beyond.

“All biology students are required to spend at least one semester of research, and funding like this expands the types of cutting-edge techniques they can use and broadens the types of interesting new questions they can investigate,” he said. “These research experiences also provide another opportunity for one-on-one mentoring between students and faculty.”

In a competitive environment in which fewer than 20% of federal grant proposals are funded, Colgate biology faculty alone have earned seven grants totaling $1.97 million in the past three years. For example, in 2010, three professors — Damhnait McHugh, Krista Ingram, and Catherine Cardelús — were awarded more than $750,000 in grants from the National Science Foundation for three distinct projects that involved student researchers. In 2011, Geoff Holm was awarded an NIH grant for reovirus research.

“Colgate’s success in getting funding is because of the history of what our students have done: their research, publications, conferences, and acceptance into great graduate schools. The funding agencies like to see a good record of success in our students and we’ve really got that.”