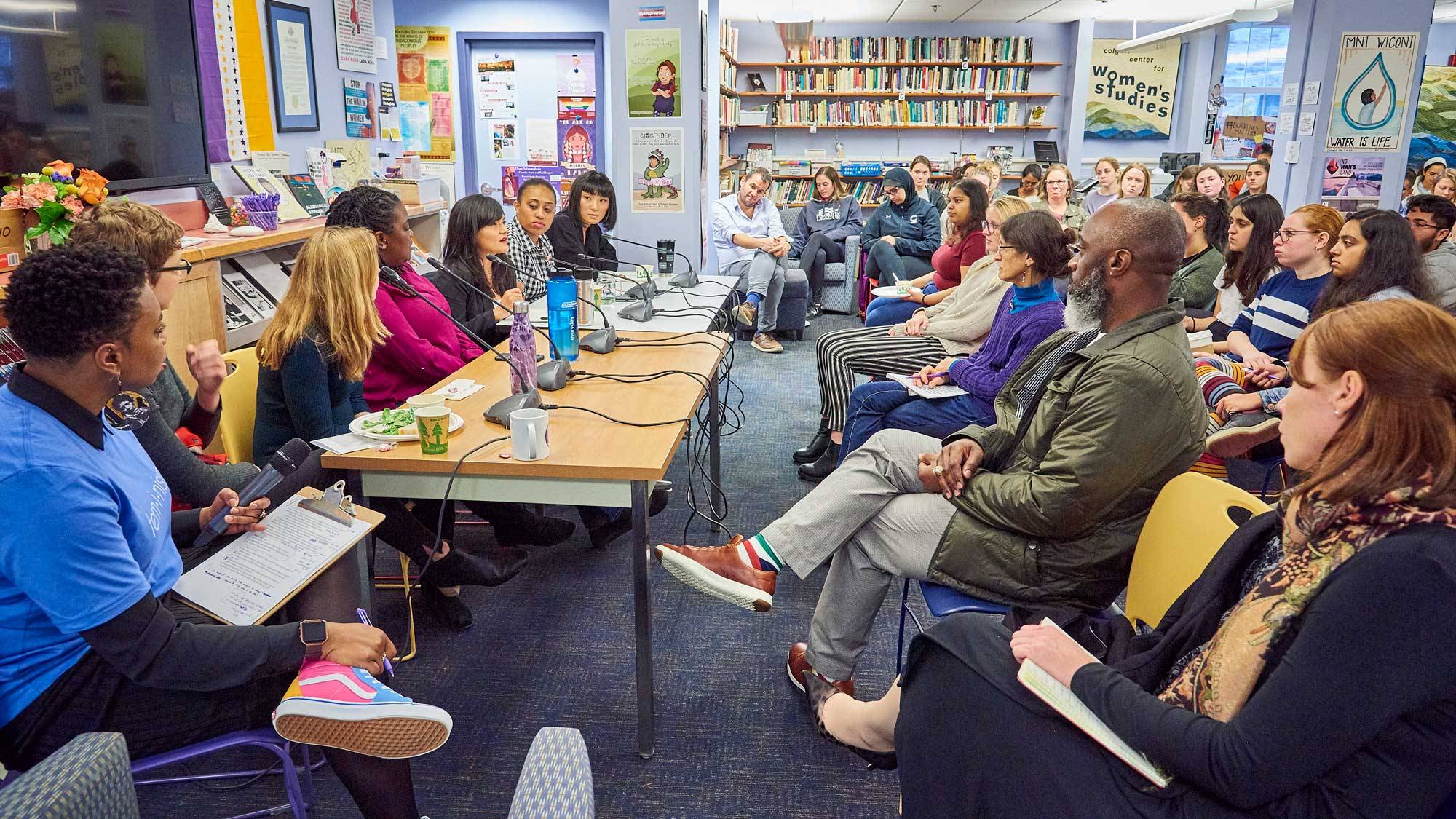 The Center for Women's Studies celebrates its 25th anniversary with a panel discussion featuring Colgate alumnae. (Photo by Andrew Daddio)

A semester-long series of events celebrated the Center for Women’s Studies’ history and the meaningful work it has fostered over the years in honor of the center’s 25th anniversary.

On Nov. 5, six alumnae panelists spoke on their time in the center and their present activism during a brown bag luncheon. Sarah Sillin ’05, Gabriella Jones-Casey ’09, Emily Ha ’09, Dena Robinson ’12, Poppy Liu ’13, and Tess Cumpstone ’15 addressed the changes they fought for while on campus as well as how the lessons they learned through women’s studies shaped their personal and professional lives.

Dominique Hill ’05, A. Lindsay O’Connor Chair of American Institutions, moderated the event, asking the panel to reflect on the ways in which they embodied the ideals of feminist activism. Many of the women spoke on the duality of their undergraduate years: time split between the empowering and accepting Center for Women’s Studies community and time spent at an institution that was, in some ways, hostile to their identities.

They spoke of their gratitude for the reprieve East Hall’s basement provided as they grappled with queer and minority identities as well as learned to navigate privilege on a predominantly heterosexual, white campus.

“A lot of my journey at Colgate was being able to step into the fact that I do deserve to be here,” Robinson said. “The women’s studies center is the place I was able to find my voice.”

They attributed women’s studies with giving them the language to understand and utilize their feelings, as well as providing a safe space and sense of community. For Ha, a mother and first-generation college student, these attributes proved vital.

“It’s not an exaggeration when I say the women’s studies center saved my life,” she said.

As undergraduates, the women organized and participated in efforts tackling issues from racism to rape culture, leaving them well-prepared for careers as feminist scholars, community organizers, authors, and activists. They emphasized their desire to sustain the center and give back to current students.

“I want students to understand that you are extremely powerful, and not to be so concerned with the rules people are telling you exist — because in reality, they are breakable,” Jones-Casey said. “You have a lot of power, and you can change environments through collective action.”

Later in the week, an evening reception was held. As students, faculty, and staff entered the space, music from WRCU DJ Tiffany Tai’s “Songs of Protest, Resistance, and Empowerment” playlist filled the air.

Susan Thomson, director of women’s studies and associate professor of peace and conflict studies, thanked the legacy of individuals who helped shape the center — from current and former students, to center interns, to previous directors and professors. She then invited key members of the community and advisory board to speak, including Associate Dean of the Faculty Lesleigh Cushing, Vice President and Dean of the College Paul McLoughlin, and Director of the Division of University Studies Nancy Ries.

Cushing read from one of the center’s first newsletters in which community members helped create the center, then located in 113 Broad.

“There’s this idea of being built in existing spaces: carving out spaces for women with the strength and energy and foresight of the women who brought in the furniture and painted,” she said. “[The center] is a real beating heart of this campus. It is a psychic, spiritual, and physical home for so many of us.”

In addition to these events, a social media campaign united those on campus with others reminiscing from afar: highlighting student clubs such as the menstrual justice group Period Project; flashing back to issues of the center’s magazine, Allegorical Athena; and spotlighting historical moments such as the center’s grand opening and previous Brown Bag speakers.

The Women’s Studies Center 25th anniversary events were made possible in part through the generosity of Katie ’01 and Tal-ee Roberts ’01, Robert Chamberlain ’74, and family, in memory of Rita Chamberlain ’75.