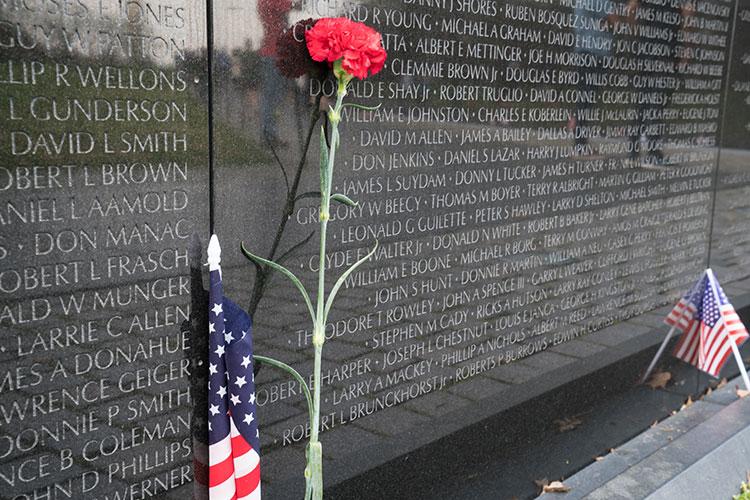 Editor’s note: In honor of Memorial Day, Bruce Guernsey ’66 shares his poem titled “The Wall,” which was selected to be published in the American Life in Poetry series started by poet laureate Ted Kooser. Guernsey was an English major at Colgate and is now a distinguished professor emeritus at Eastern Illinois University. He has published seven collections of poetry and several chapbooks.

Someone has opened a giant map
and with the tips of our fingers,
each of us suddenly blind,
we track the black cold of this monument
for names we know
like finding a route home.

Lost here
this damp spring morning,
the cherries exploding like the fourth of July,
we wonder how many maps of Viet Nam
sold those years,
so many strange sounding places.

One of us holds a magnifying glass
to McCarroll, McMorris, McNabb,
small print in the polished stone,
the way a neighbor, say, in Neoga, Illinois,
might have done, late at night
searching that faraway land on his kitchen table,

hearing again the morning paper
thump against the front door,
that boy on his bike in the dark
grown and gone—what was his name,
that kid from down the block?—
Khe Sanh, Da Nang, Hanoi.

Being a student at Colgate during the middle 1960s was to be continually caught up in national events, from the very sad to the frightening: Soviet missiles in Cuba, the Kennedy assassination, the struggle for civil rights, and serious talk of war in some place called Viet Nam.

“War?” Huh? Where is that place, and why do we care, and who’s going to fight it?

Guys in their early 20s, that’s who — guys like us, we realized — and for most of my
senior year the campus was fierce with heated discussions of our country “right or
wrong.” But what about that job I was hoping to get, and should I enlist or leave the
country, and “What are you, a coward?” . . .

Deeply troubling times, and now to see The Wall in Washington, and all those names —
they who fought that war: all of them Colgate men and women, in a way, and all of us
there together.