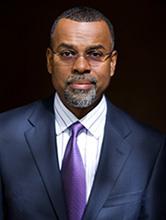 Eddie S. Glaude Jr., the William S. Tod Professor of Religion and African American studies and the chair of the Center for African American Studies at Princeton University, will deliver the keynote address at Colgate’s 194th commencement on Sunday, May 17, in Sanford Field House.

Glaude, widely regarded as one of the leading young African American intellectuals in the United States today, is the author of Exodus! Religion, Race, and Nation in Early 19th Century Black America, which won the Modern Language Association’s William Sanders Scarborough Book Prize.

His award-winning book, In a Shade of Blue: Pragmatism and the Politics of Black America, has been characterized as a tour de force.  He has a new book scheduled to be published during the 2016 election year, Democracy in Black: How Race Still Governs the Soul of America (Crown Publishing).

Glaude has frequently appeared on The Tavis Smiley Show, Fox TV’s Hannity & Colmes show, CNN, and C-SPAN. He spoke at Colgate as part of the Martin Luther King Jr. celebrations in 2012.

A graduate of Morehouse College, Glaude earned a master’s degree in African American studies from Temple University and a master’s and PhD in religion from Princeton University. He is also a senior fellow at the Jamestown Project at Harvard University, an action-oriented think-tank.

The baccalaureate speaker for the 194th commencement will be the Rev. Gay Clark Jennings ‘74, the first ordained woman to be elected president of the Episcopal Church House of Deputies. As president, Jennings has been committed to fostering a new generation of leaders in the Episcopal Church and strengthening the church’s commitment to vulnerable children, immigrants, and lesbian, gay, bisexual and transgender people.

An ordained priest since 1979, she has held numerous leadership positions within the church and is the clergy representative to the Anglican Consultative Council.

— Elizabeth Brackett and Thomas E. Brackett, emeritus computer science professors at Colgate and founders of the Brackett Refugee Education Fund. The Bracketts first visited refugees from Burma at camps in Thailand in 1992. With the help of John Novak, a fellow Colgate professor, they created a charitable foundation in 1997 to help refugees through education. The foundation supports refugee and immigrant schools, provides college scholarships, and offers critical funding for a variety of educational programming.

— Edward S. Macias ’66, provost emeritus and the Barbara and David Thomas Distinguished Professor in arts and sciences at Washington University.  Macias is a former Colgate trustee. He served as chief academic officer at Washington University for 25 years, stepping down in 2013. He joined the faculty in 1970, and is the author of two books and more than 90 articles. He participated in a renowned air pollution study of the Grand Canyon. Macias is now leading an effort to explore the university’s approach to online education.

— Naomi Oreskes, professor of the history of science and affiliated professor of earth and planetary sciences at Harvard University. Oreskes’s 2004 essay “The Scientific Consensus on Climate Change” in Science magazine has been widely cited, both in the United States and abroad. Her 2010 book, Merchants of Doubt, How a Handful of Scientists Obscured the Truth on Issues from Tobacco to Global Warming, co-authored with Erik M. Conway, was short-listed for the Los Angeles Times Book Prize, and received the 2011 Watson-David Prize from the History of Science Society.