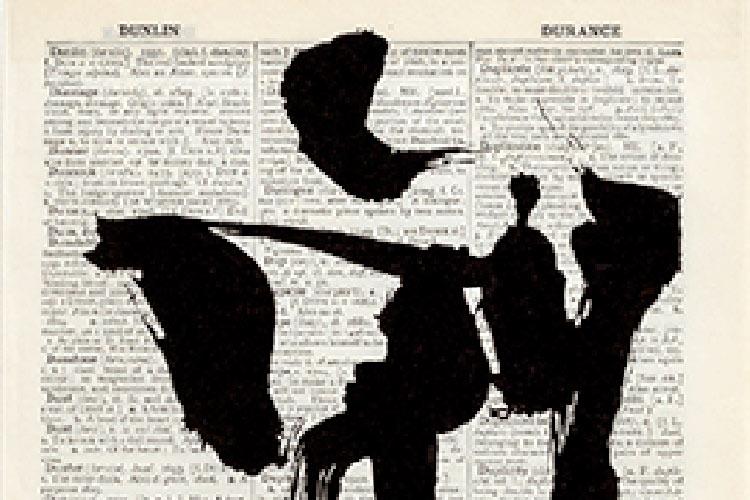 Renowned South African artist William Kentridge reflects on a lifetime of work and reimagines elements of everyday life in the exhibition Universal Archive, on display at the Picker Art Gallery this spring.

More than 75 of Kentridge’s linocut prints are featured in the exhibition, depicting images of coffee makers, trees, birds, and typewriters, most of which are printed on pages of the Oxford English Dictionary. The prints are based on an earlier set of ink drawings that he produced.

“It’s Kentridge reflecting upon his overall body of work, and certain subject matters that are reoccurring throughout,” explained Sarah Horowitz, curatorial assistant at the Picker Art Gallery and Longyear Museum of Anthropology. “He’s trying to document what we think are these ordinary objects, and how they are part of our overall understanding or knowledge of the world.”

The traveling exhibition from the Gund Gallery at Kenyon College was adapted for its time at the Picker. Two sculptures, titled Nose II (Walking), were brought to the gallery on loan from the collections of Anne M. Huntington ’07 and Ahmar and Noreen Ahmad.

In preparation for the exhibition, Daniel Serrano ’16 conducted extensive research on Kentridge’s work. He did much of that research with Jessie Cohen, a scholar from the David Krut Workshop in Johannesburg, where the Universal Archive print series was produced. Then, Serrano considered different elements to add to the show. Serrano and Cohen worked with the workshop to obtain two rare documentary films on view and photographs of Kentridge creating some of the pieces on display in his studio in Johannesburg.

“It was really interesting to decide with Jessie which piece of video art would work best to show Kentridge’s abilities with a different medium, but would also flow seamlessly with the print materials being exhibited,” said Serrano.

In addition, Natalie Ramirez ’19 and Serrano gave tours of the exhibition during the opening. Tapping research conducted with Cohen, they wrote labels for a few of Kentridge’s pieces on display. They also helped create a docent program for the exhibition by researching information to be shared with tour groups.

“Kentridge’s work is full of nuances, metaphors, and figures that make the viewer question what they actually know about the object they are looking at,” Ramirez said. “What makes art so interesting is that what you see mounted on the wall is a reflection of what is going on in your own mind. Especially with this exhibit, each print seems like a still in a film, allowing viewers to narrate their own story.”

William Kentridge: Universal Archive will be on display until May 15, 2015. Admission is free, and the exhibition is open to the public.