From appropriation to appreciation 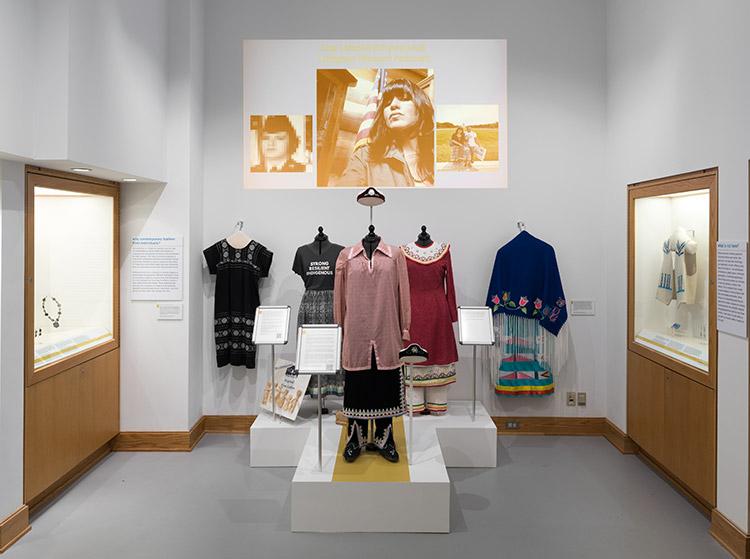 As Halloween approaches, the issue of cultural appropriation in costumes is brought to the fore. To address stereotypes and celebrate indigenous identities, the Longyear Museum of Anthropology opened the Not a Costume exhibition on Sept. 27.

“We felt it was important that the exhibition coincided with Halloween so we get people to think critically about what they’re doing with costumes,” curator Christy DeLair says.

The exhibition showcases indigenous fashion, through displayed attire and high-fashion catalogues. Dress forms line one wall, showcasing a colorful assortment of outfits for both casual wear and for culturally significant festivals. Display cases hold traditional tan hide vests and moccasin shoes, as well as lei necklaces made from kukui nuts, turquoise jewelry, and beaded earrings and bracelets rooted in Navajo elements and Maya patterns, among other equally intricate indigenous objects. Items on loan from Robert Hunter, security officer for the Picker Art Gallery and Longyear Museum of Anthropology

A community-based exhibition, all of the items came from faculty, staff, students, and alumni. DeLair wanted to acknowledge indigenous identities in Colgate’s 200 yearlong history, as well as the indigenous individuals who continue to influence campus culture today.

“[The exhibition] evolved into being really Colgate focused,” she says. “It happened naturally when thinking about the Bicentennial and ways we could have indigenous voices make their presence known on campus.”

Over the summer, DeLair spoke with interested participants who identified as indigenous from the Western Hemisphere to garner a sense of what stories they wanted to tell. Participants either contributed oral interviews or text accompanying their loaned items. Some labels include QR codes that led to an audio file elaborating on an individual’s story. A slideshow of indigenous community members takes up the majority of one wall, putting Colgate faces to the stories being told.

“The museum is not telling people what the objects should say,” DeLair says. “The story comes from the community members who are loaning their materials.”

DeLair shared her own story as a Turtle Mountain Band of Chippewa descendent. And Jackie Old Coyote-Logan, senior administrative assistant to the dean of the faculty/provost, wrote about her first buckskin dress.

“My [aunt] made the dress for my mother when she was ill,” Old Coyote-Logan wrote in the text accompanying the piece. “Cancer consumed my mother’s body, and the dress waited nearby … to wear in better days, in better health. That wish did not come to pass… so it was determined the dress should not be buried, but instead, passed on to one who would live the wish.”

Not a Costume was accompanied by a hallway display case on Native American fashion as represented by dolls borrowed from the Longyear Museum’s standing collection. Six student curators completed the research, layout, and organization.

The exhibition will be on display in the Longyear Museum of Anthropology until Dec. 13.