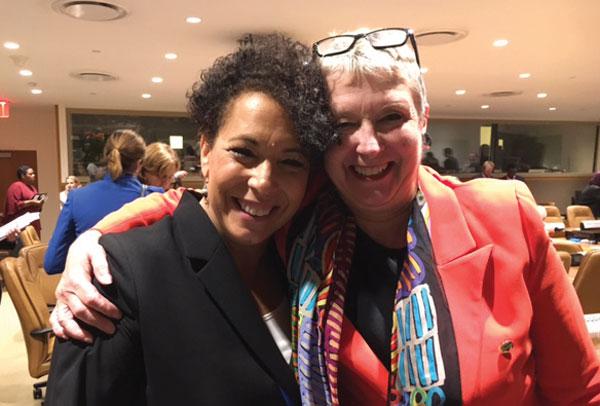 Michele Klein Solomon ’83 (left) and geography professor Ellen Kraly at a previous UN Summit on Refugees and Migrants in September.

Michele Klein-Solomon ’83, a senior policy adviser at the United Nation’s International Organization for Migration (IOM), addressed a hearing of the U.N. General Assembly on July 26, in preparation for an upcoming international conference to adopt a global compact for safe, orderly, and regular migration.

While the group talked about ways the U.N. can help address many of the negative drivers of migration, Klein-Solomon asked the group to ensure that efforts don’t impact the positive forces of beneficial migration.

“I think we need that qualification … stop the negative drivers,” she said. “Do not stop the factors that empower people through migration. It would be important to my mind, and IOM’s mind, to have that distinction when we’re talking about addressing the drivers of migration.”

(Editor’s Note: The following is a Spring 2017 Colgate Scene Life of the Mind piece about Klein-Solomon’s work. It was written by Brianna Delaney ’19 and has been updated.)

“What is the most effective way to help generate a more balanced discourse about migration and therefore more evidence-based policy making?” asked Klein-Solomon at a March 8 lecture in the Ho Science Center.

Klein-Solomon spoke on her work and the common misconceptions regarding migrants in her lecture, “International Migration and Human Mobility: Opportunity or Threat in an Interconnected and Insecure World.”

“The perception is that migration is out of control, [that] people are coming to take jobs and benefits from citizens,” she said. “And oftentimes, political decisions at national and international levels are made on the basis of supposition or gut feelings, and not so much on evidence.”

But the evidence is clear that migration provides benefits not just for migrants, but also for the nations that they inhabit, Klein-Solomon said. “Migrants actually contribute more to the societies that they come to — whether in taxes, skills, investment, or in spin-off employment and employing natives — than they take.”

So where does this disconnect between fact and opinion originate? Human nature, Klein-Solomon said. “We are fundamentally, as human beings, tribal. We worry at a gut level about belonging to our small units — our family, our communities, our countries, our historic identities, and our religions. And it takes a while to overcome that and have a broader sense of belonging.”

She concluded by describing what she called the “governance challenge” — how to create better systems to ensure the safety and rights of migrants while also guaranteeing the security of states and ensuring that societies benefit from migration.

In trying to solve this question, Klein-Solomon said, she must often challenge herself to engage with people who have different perspectives. “I [recently] had dinner with one of the major immigration opponents from the United States,” she said. “I deeply wanted to understand his outlook and perspective. I think it’s possible to have civil discourse and at the same time present new narratives and new ways of thinking things that open up people’s minds.”

Klein-Solomon received an honorary doctorate from Colgate at commencement. Prior to joining the IOM, she served as an attorney adviser with the U.S. Department of State.