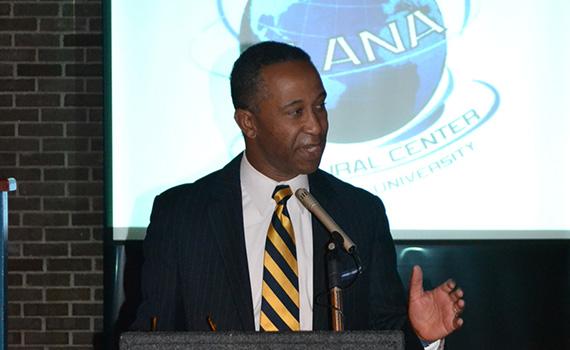 Garfield Smith ’85 delivers the keynote address and facilitates the awards ceremony at the ALANA Spring Soiree.

At ALANA’s Spring Soiree, Garfield O. Smith ’85 recognized the contributions of previous Colgate students who have paved the way for current students — including those receiving this year’s multicultural awards.

Hoa Dieu Bui ’14, Danielle Bynoe ’14, and James Speight ’14 were honored as students who have demonstrated outstanding work in the multicultural community. The reception took place at the Edge Café on April 3.

“Many of the same issues are still here [as when I was a student], and thus, many of the same opportunities are as well,” reflected Smith, who facilitated the ceremony and delivered the keynote address.

Now the vice president of marketing at Oberthur Technologies, a security services company, Smith was a political science major. As a student, he received the Stimets Award, the George Cobb Fellowship, and the President’s Award.

In difficult times, Smith said, he “would often think about the likes of Adam Clayton Powell Jr., a Colgate student and the first person of African-American descent elected to Congress from New York. Or Naceo Giles, a Colgate alum, who in 1969 led a 70-hour sit-in to protest racial injustice at Colgate and fight for a place that students of color could call their own.”

In addition, Smith noted the power of cross-cultural collaboration, citing a study about scientific collaboration that was co-authored by Harvard University economist Richard Freeman. “Now, even scientific proof exists to show the benefits of collaboration to achieve a goal,” Smith said. “Take hold of the opportunity to reach out to others unlike yourself to solve these issues.”

The ceremony recognized Colgate faculty and student groups that have contributed to the mission of diversity and inclusiveness.

The reception concluded after the presentation of awards to the three seniors. Speight has been active in promoting multicultural awareness in Greek Life; Bui helped create Colgate’s Anti-Racism Coalition; and Bynoe has worked with the Broad Street Association to facilitate conversations between Broad Street housing and campus.