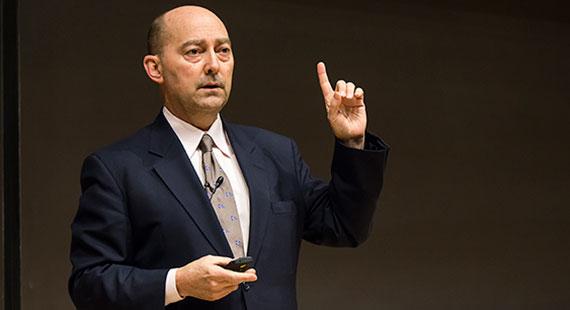 Centering his presentation on the idea of “building bridges rather than walls,” retired Admiral James Stavridis spoke about current challenges to global security and opportunities for international collaboration during his recent visit to Colgate.

As NATO’s former Supreme Allied Commander-Europe, an accomplished member of the Navy, and the current dean of The Fletcher School at Tufts University, Stavridis is a well-known voice in global affairs.

Stavridis discussed some of the current hot topics in global security, such as terrorist group ISIS, weapons of mass destruction in Iran and North Korea, tensions in Syria and East Asia, and the fragility of the European economy. He also covered more general topics such as pandemics, cyber crime, poverty, and inequality.

Stavridis pointed to collaboration as the best solution to each of these threats: “These are the bridges: alliances, coalitions, partnerships. We don’t have to do this by ourselves. We [the United States] cannot be, nor should we be, the world’s policemen, but we can be leaders.” He mentioned India as a particularly important potential ally.

The retired admiral was brought to campus on February 25 by the university’s International Relations Council.

“Our goal as an organization is to drive discussion of global and comparative politics,” said council president John Tetnowski ’15. “Our hope is that all who attended the event left it better informed, and therefore will be better equipped to have their own future discussions about some of the preeminent global security issues of the day.”

During his lecture, Stavridis advocated for the use of “smart power” as a major opportunity moving forward. This combination of soft power — benevolence enacted to advance a certain set of values — and hard power, such as use of the military, is what he believes will truly make a difference.

He emphasized the importance of individual learning, as well. “We all ought to spend a little bit more time listening before moving into action.”

Following the event, Fred Chernoff, Harvey Picker Professor of international relations and director of the International Relations Program, weighed in on what Stavridis had to say.

“He speaks from an exceptionally well-informed position on matters of international security and civil-military relations,” Chernoff said. “The lecture certainly dispelled any stereotypical images an audience might hold about the militarist orientation of top officers of the armed forces.”