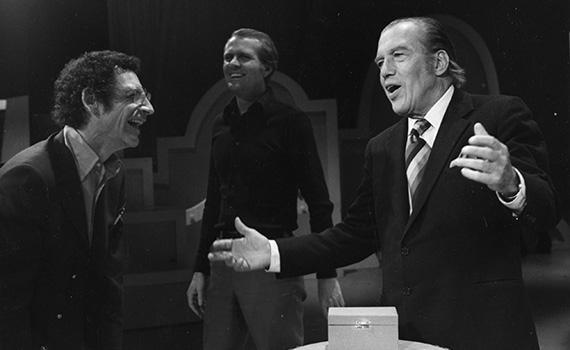 Robert Arthur ’49 (left) was the musical director for The Ed Sullivan Show for many years.

(Editor’s note: This article was written by Anne Stein.)

In anticipation of this Sunday’s 50th anniversary of the Beatles’ landmark appearance on The Ed Sullivan Show, Robert Arthur ’49 reminisced about that day and his role as the show’s musical director.

A record 73 million people tuned in on February 9, 1964, to watch the Beatles’ first live performance on American TV. As The Ed Sullivan Show‘s musical director, Arthur had a dilemma.

Although Sullivan was a genius at booking the best talent of his day, he wasn’t as savvy about TV’s technical side. At the time, explained Arthur, the show used only boom microphones, which loomed above performers on stage and were unseen by the TV audience, because Sullivan felt that visible microphones looked very “untelevision.”

However, due to screaming fans, “it soon became clear that with boom mikes we weren’t going to hear any of the Beatles singing,” Arthur explained. He told his boss that they’d have to place microphones in front of the musical guests — an idea that Sullivan “didn’t take to kindly.”

“He finally relented after the technical people backed me up, and we used stand mikes,” Arthur said. “And that’s how America heard the words to ‘I Want To Hold Your Hand.’”

Now retired and living in Los Angeles, the 85-year-old looks back on a career that is packed with unforgettable moments with famous entertainers and from the numerous TV shows he produced.

A soft-spoken, Long Island native, Arthur grew up playing piano and began songwriting in high school. At Colgate, where he majored in economics and Spanish, he wrote two musicals, both performed using veterans’ wives and women from nearby Cazenovia College for the female parts.

After graduation, Arthur became an accompanist, conductor, and arranger. Things came to a two-year halt when he was drafted to serve in the Korean War. He went into the infantry and became a bayonet instructor, “but they couldn’t stop me from writing songs, entertaining my buddies and maintaining my sanity.”

When Arthur returned to New York in 1952, top TV music director Ray Bloch hired him as his assistant to work on shows including Jackie Gleason’s and Ed Sullivan’s (then called Toast of the Town). Within a few years, Arthur was hired full time to handle all the music for Sullivan — arranging, supervising, composing, and working with guests

Arthur influenced many artists who appeared on the show. “Bob Arthur was the first one to talk Diana Ross into doing classics rather than just doing the pop stuff,” show director John Moffitt recounted on the Ed Sullivan website. “He talked her into doing Rodgers and Hammerstein and other composers. He helped to diversify her material and her career.”

In his last few years with Sullivan Productions, Arthur wrote and produced the annual Entertainer of the Year Awards.

When The Ed Sullivan Show ended in 1971, Arthur moved to California, where Dick Clark was looking for someone to help him mount his new American Music Awards.

Clark hired Arthur to write the script, the music, and produce special portions of the show. This became the first of dozens of music awards shows Arthur wrote and produced over the next four decades. He worked closely with artists such as Michael Jackson and Natalie Cole, setting videos of Jackson’s dancing to Beethoven and Bach, which Jackson showed at his concerts, and co-writing one of Cole’s favorite songs, “All About Love.”

Arthur now enjoys life in Topanga Canyon with his wife, Jeanne, and composing songs in the style of Cole Porter and the Gershwins. “They had great lyrics, interesting chord changes, clever rhyming, and wonderful harmonics,” Arthur said.

When he finishes a CD’s worth of songs, he puts his music on CDBaby.com. “It if moves [sells], fine. If it doesn’t, that’s OK, too,” Arthur said. “Most of my pleasure comes from writing a great thing, listening to it, and enjoying it. It’s almost like I didn’t have anything to do with it — the song just pops out.”