2018 in Pictures: Our Photographer Selects His Favorites 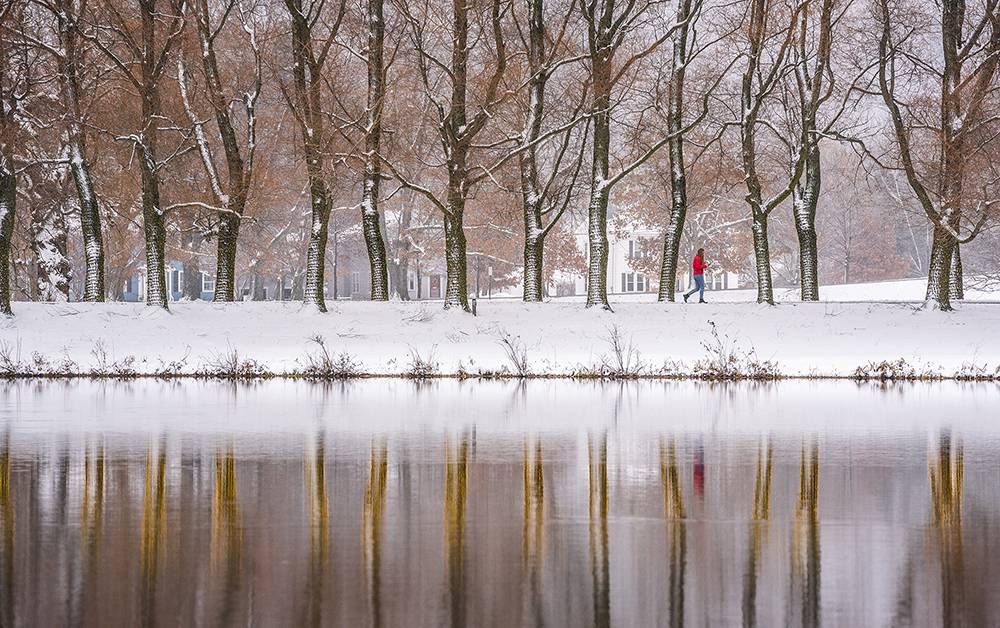 1.) “We are making photographs to understand what our lives mean to us.” — Ralph Hattersley

Often when I’m making photographs, I keep my eye open to seeing repetition of patterns and balance within a composition. When photographing Willow Path across Taylor Lake from Broad Street, it is easy for the path to become eye level and appear almost two-dimensional. The spacing and balance of the trees allow for natural framing elements for pedestrians traveling along the path. 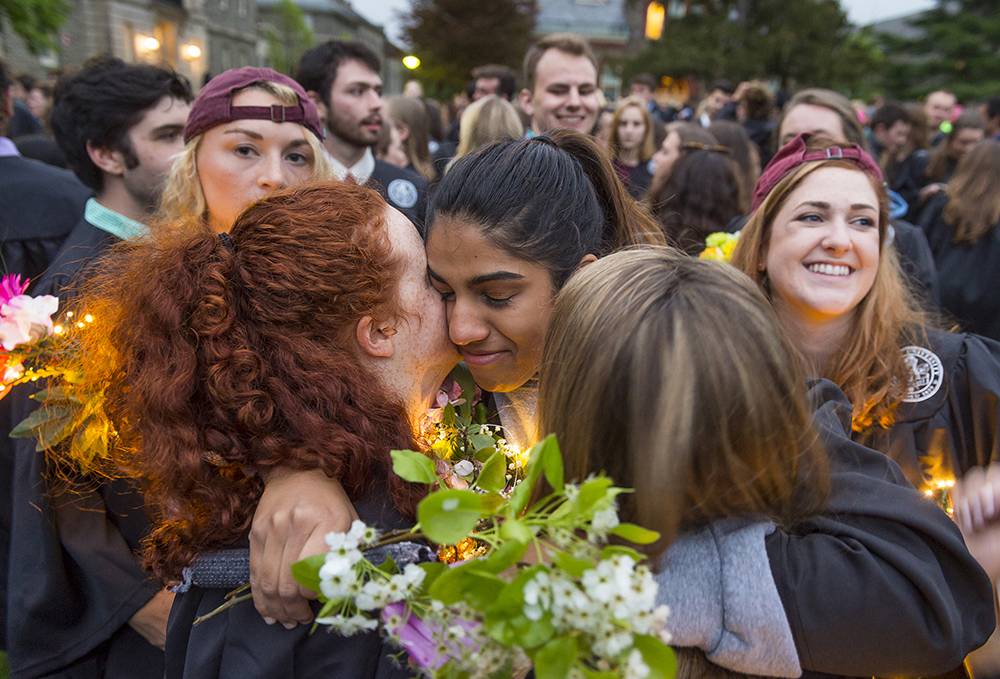 2.) “There is one thing that the photograph must contain, the humanity of the moment.” — Robert Frank

The evening before commencement often yields itself to emotional moments as our seniors share the joys of their successes with other seniors — a journey they have all taken together. In these moments, I like to photograph as close to the emotion as possible to give the viewer an intimate experience. 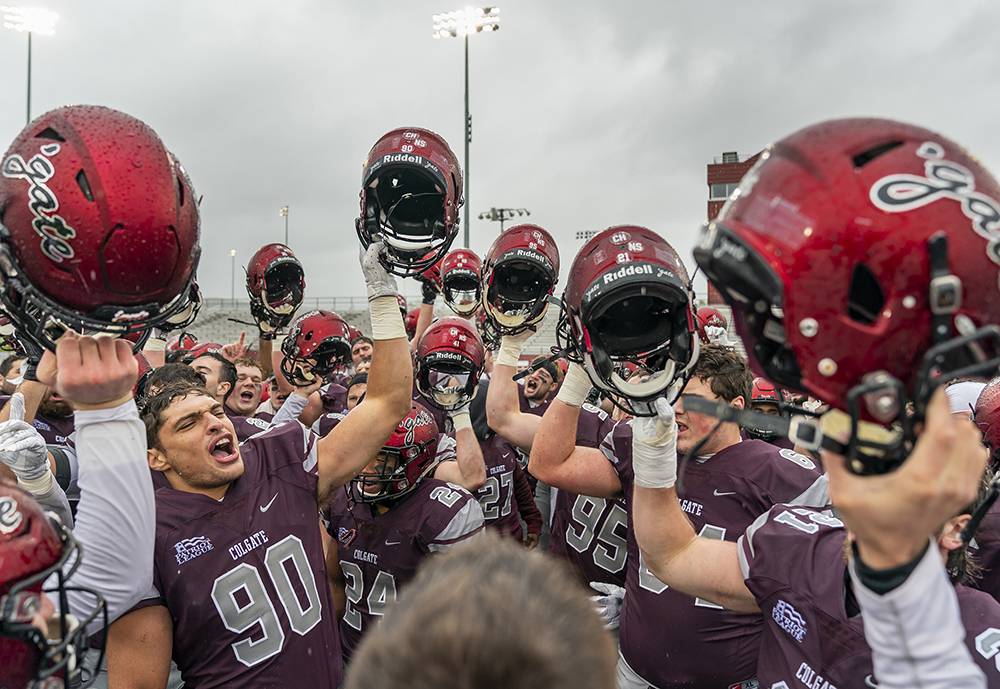 3.) “Once you learn to care, you can record images with your mind or on film. There is no difference between the two.”
— Anonymous

When covering sporting events, there is always a lot of action to photography. Action shots are some of my favorite to take, and when I’m looking through thousands of frames from a game, there are always a handful of images that capture the action in a way that these frames rise above the rest. The game, however, is not always just about the action. It is also about the reaction, the dejection in some cases, the celebration, and the camaraderie. 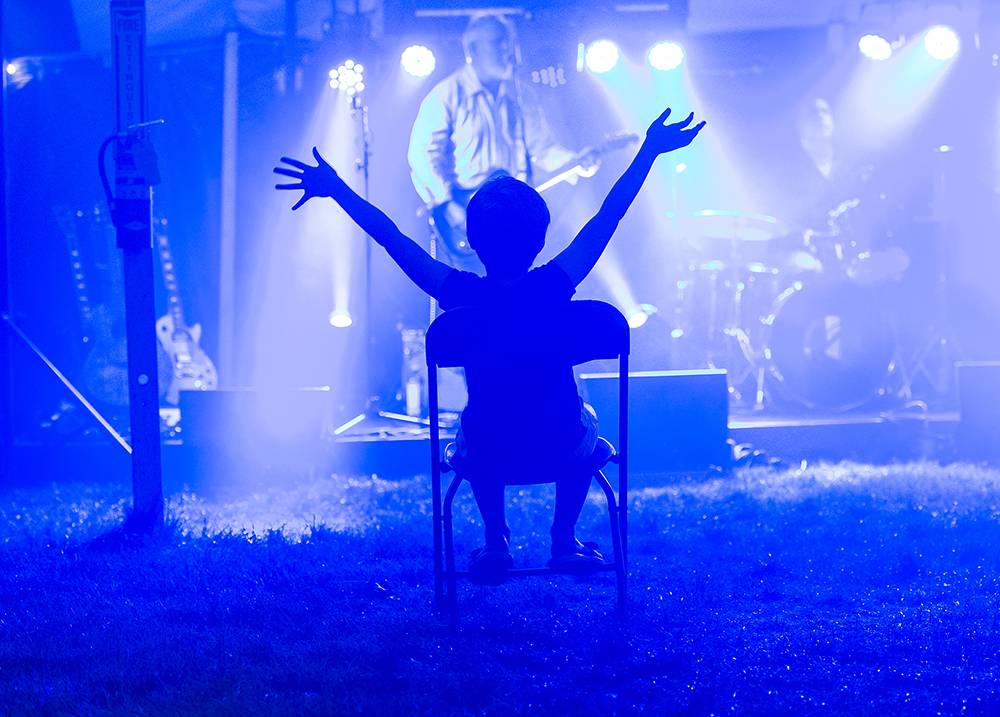 4.) “Great photography is about depth of feeling, not depth of field.”
— Peter Adams

Reunion is that time of year when alumni meet again, in many cases after not seeing each other in years. It is also a time when future Colgate generations may experience the campus for their first time. When photographing reunion this year, I zoned in on this moment as I saw the silhouette. Then it was just a matter of waiting for this little boy to react to the band performing in front of him. 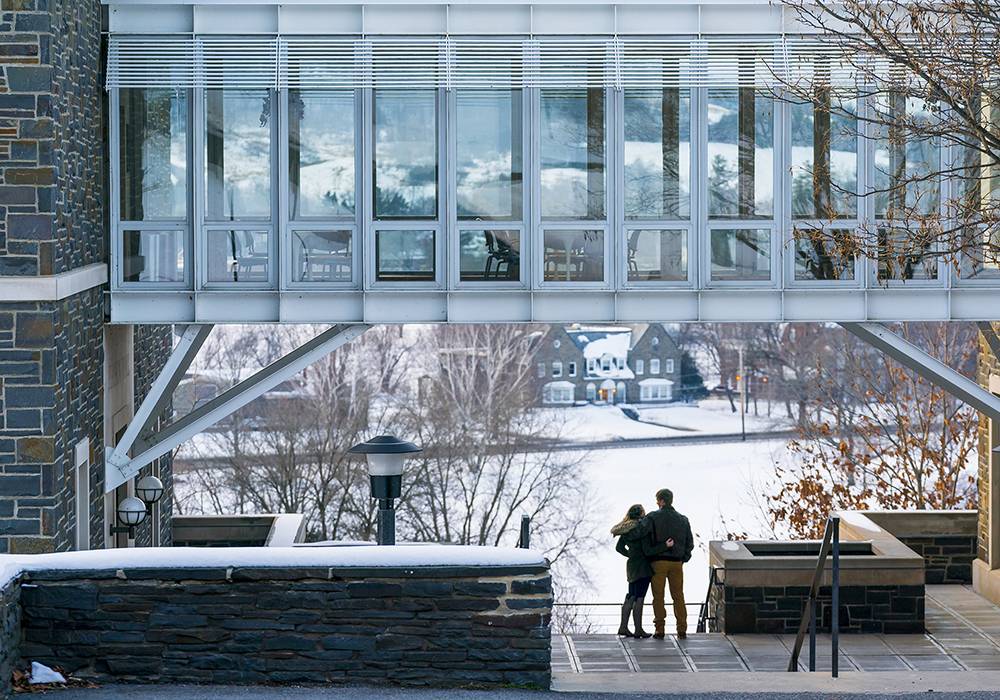 5.) “Once photography enters your bloodstream, it is like a disease.”
— Anonymous

The time in between the fall and spring semesters can be slow for foot traffic around the campus. The students are away and the footpaths normally bustling with students and professors are nearly vacant. This can pose a challenge for taking photographs. I happened to luck out on such a day last January while on a photo walkabout as I spotted this couple on the Persson Hall landing. 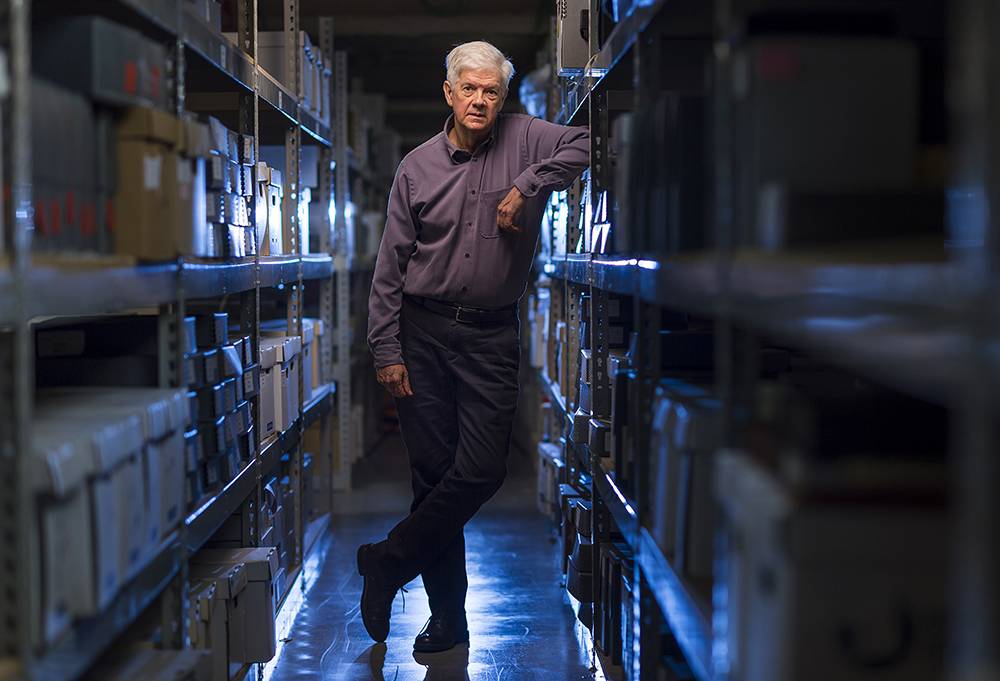 6.) “All photographs are accurate. None of them is the truth.”
— Richard Avedon

I was tasked earlier this year with making a photograph of Jim Smith '70, author of the university’s new history book. The Case-Geyer Library archives are equipped with fluorescent lighting, which isn’t ideal for making portraits. To make this photo, I used two Nikon speedlight compact flashes and used a warming gel inside the key light that is lighting his face. This allowed the other light without a warming gel to take on a cooler appearance and light the stacks behind him. 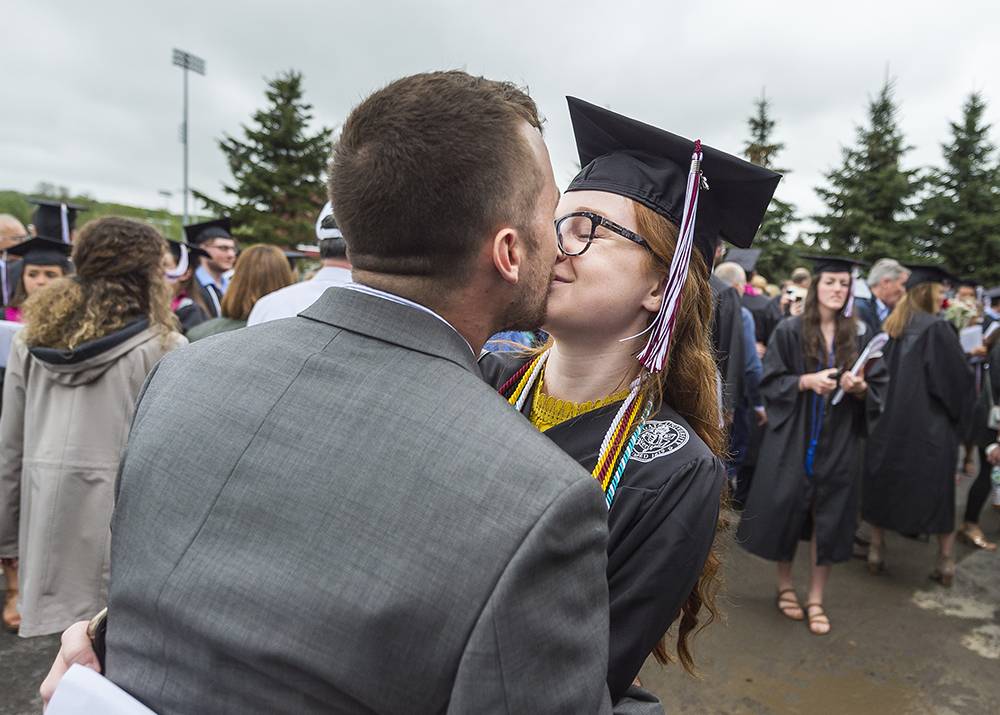 7.) “I think life is too short not to be doing something which you really believe in.” — Steve McCurry

Commencement always makes for good photography. From start to end, the day is full of moments and emotions. I often believe that it was my training and career in photojournalism that prepared me over the years to not only recognize these moments but also anticipate them. For me, the closer I am to these moments as they are happening, the better the photo. 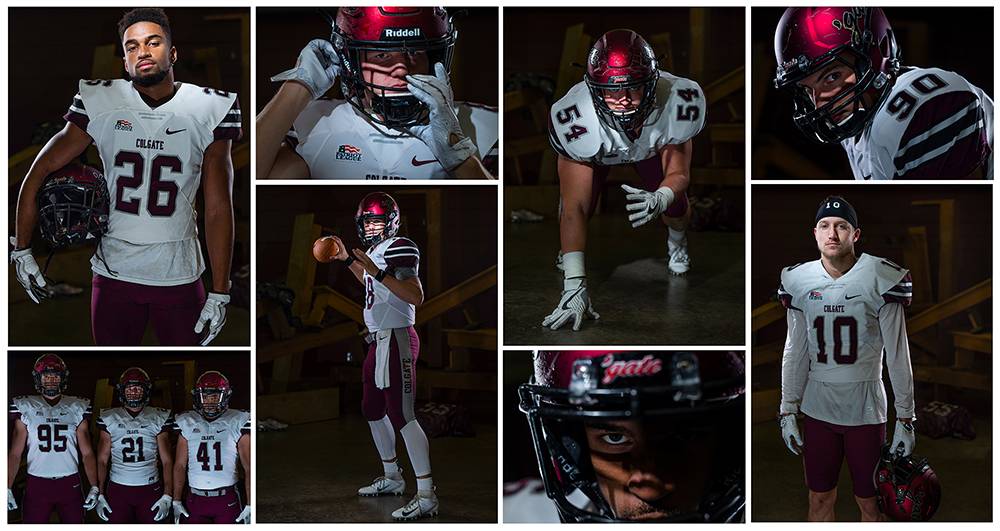 8.) “Photography, as a powerful medium of expression and communications, offers an infinite variety of perception, interpretation and execution.” — Ansel Adams

For some time, I had been wanting to do portraits of athletes that capture them in dramatic lighting to express a competitive attitude that you find in a Division I athletics program. This fall, I was able to photograph the Colgate Raiders football seniors in such a way. There were four separate light sources used in making these images: 4’ strip boxes were used on the left and right side of each athlete to create rim light while a Nikon speedlight was used to light their faces and another Nikon speedlight was used several feet behind the photographer to allow for a subtle fill flash. 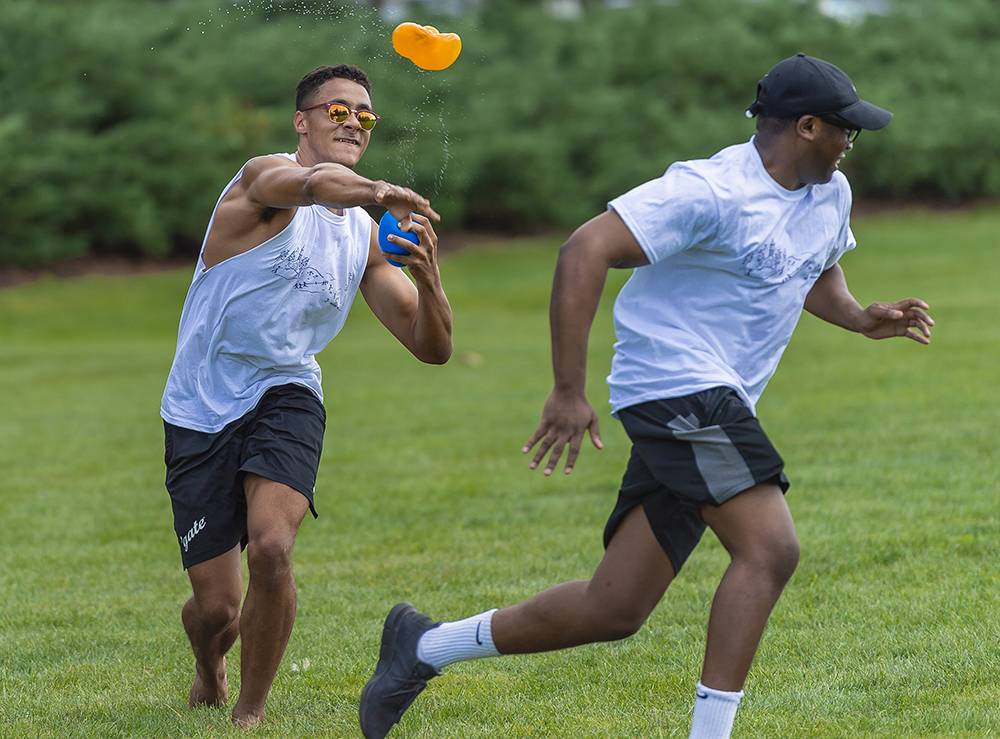 9.) “Photography is a love affair with life.” — Burk Uzzle

The Konosioni field day is always something I like to add to my calendar. It’s celebratory, and it marks the end of summer and the beginning of a new semester. In many ways, it brings me back to memories of my own undergraduate institution when I participated in field games and water balloon fights. 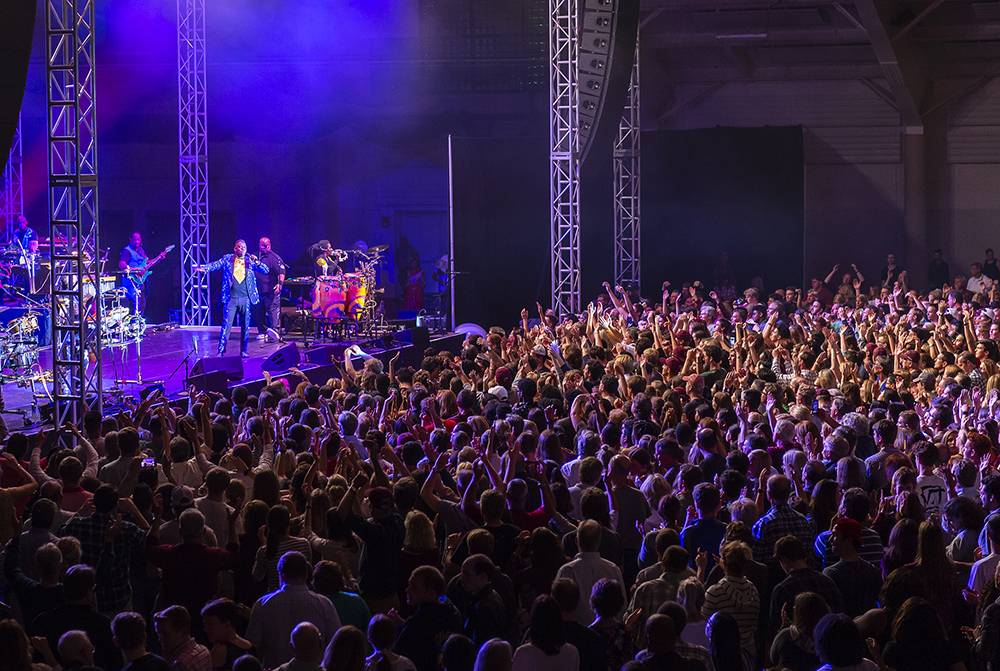 10.) “Your photography is a record of your living, for anyone who really sees.” — Paul Strand 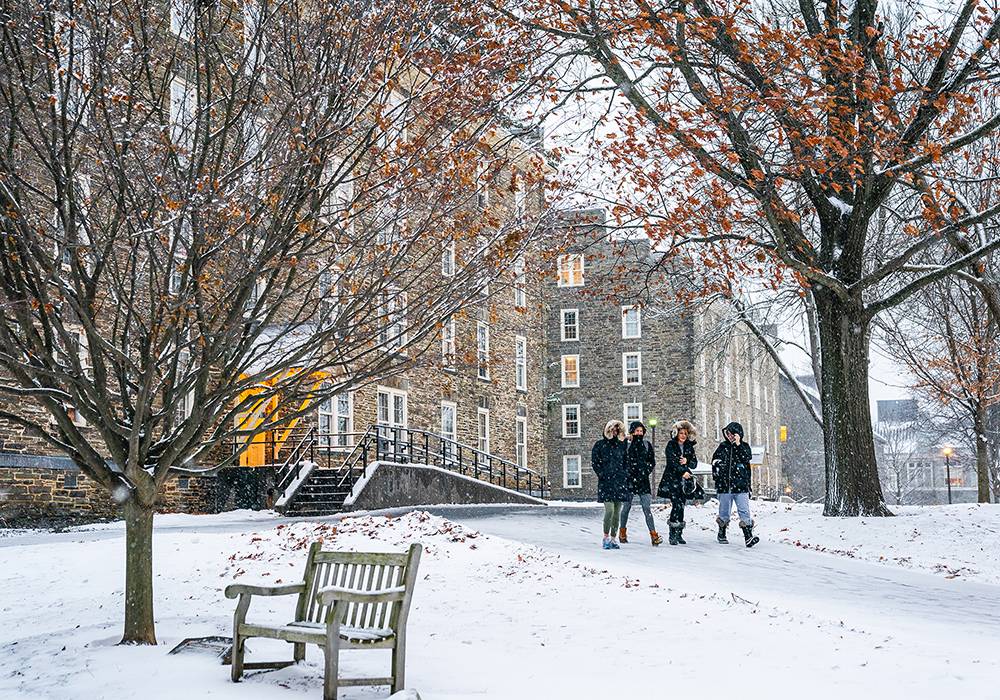 11.) “What makes a photograph a strange invention is that its primary raw materials are light and time.”
— John Berger

One of the best assets of living in the northeast is watching how seasons transition from one to another. As we know from being residents here, winter can often occur in the fall. While making photos on this particular day, I enjoyed how the fresh snowfall had just started to blanket the leaves that were still on the ground. 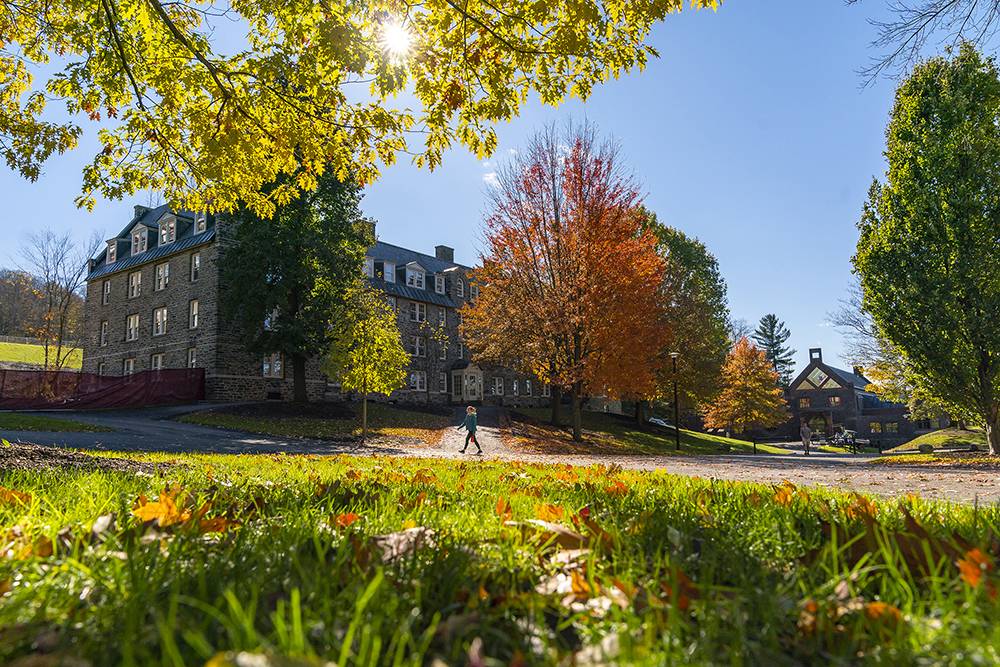 12.) “The art of photography is all about directing the attention of the viewer.” — Steven Pinker

Much of composing a photograph lies in placing yourself where something will happen and waiting for it. I wanted to choose an angle where I could capture the leaves on the ground while also capturing foot traffic. I wanted to also use the path leading to Stillman Hall as a framing device. Then it was only a matter of waiting for someone to walk by. 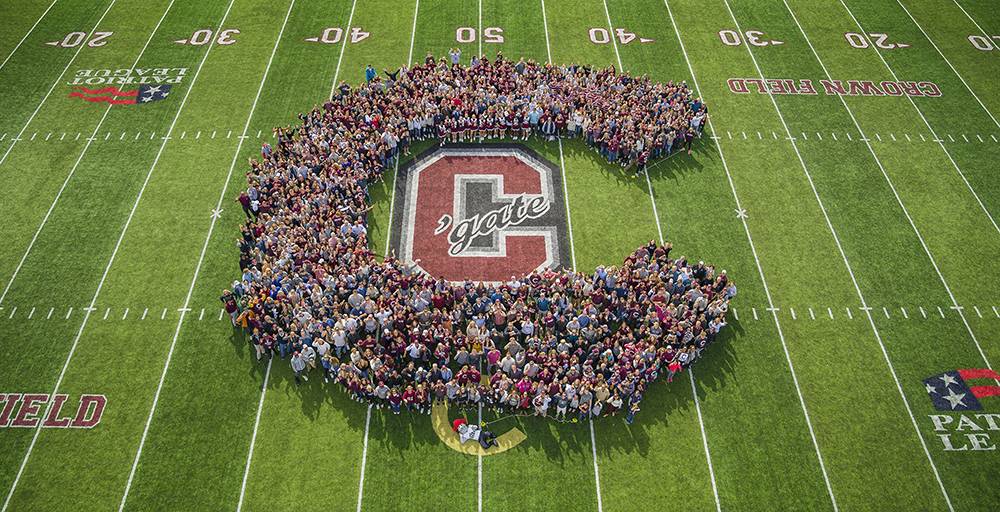 13.) “Photography is about capturing souls not smiles.”
— Dragan Tapshanov

One thing that is truly unique to Colgate is its spirit. Our videographer Brian Ness and I purchased a drone earlier this year and have been putting it to good use. It was important for us to use it to capture Colgate’s spirit in the Bicentennial year and couldn’t have been a more valuable tool in photographing members of the Colgate community forming the Colgate C at halftime during Bicentennial Weekend.