Elana Shever is a cultural anthropologist with interests in natural resources and materiality; science, technology and corporations in society; neoliberalism; globalization; and capitalism. She has conducted research in Argentina, Colombia, and the United States. 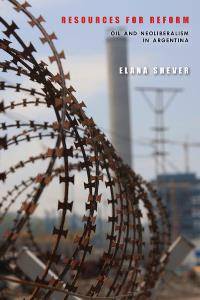 Dr. Shever's first book, Resources for Reform: Oil and Neoliberalism in Argentina (Stanford University Press, 2012) explores how people’s lives intersect with the increasingly globalized and concentrated oil industry through a close look at Argentina’s experiment with privatizing its national oil company in the name of neoliberal reform. Examining Argentina’s conversion of its state-controlled oil market to a private market, the book reveals interconnections between large-scale transformations in society and small-scale shifts in everyday practice, intimate relationships, and identity. It offers a window into the experiences of middle-class oil workers and their families, impoverished residents of shanty settlements bordering refineries, and affluent employees of transnational corporations as they struggle with rapid changes in the global economy, their country, and their lives. Resources for Reform reverberates far beyond the Argentine oil fields and offers a fresh approach to the critical study of neoliberalism, kinship, citizenship, and corporations.

This study has led to Dr. Shever's continued involvement in developing the critical anthropology of corporations. She wrote a review of the scholarship on transnational and multinational corporations for the International Encyclopedia of Anthropology. She also the author of the chapter "Corporations" for The Anthropology of Resource Extraction, which is being edited by Lorenzo D’Angelo and Robert Pijpers for Routledge. 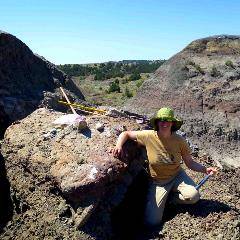 Dr. Shever is currently working on a project called Making Our Beasts: Dinosaurs, Fossils and Science in the United States. This ethnography of science-in-action uses a familiar topic—dinosaur paleontology—to examine science and its objects in new ways. Shever’s research reveals what the common notion of scientific discovery hides, that is, that fossils are not discovered. They are made. Shever shows how fossils are created through a more-than-human process in which multiple forces—both human and nonhuman—determine which pieces of rock become valuable and meaningful objects, and which disintegrate into dust.

The first publication from this project is “Becoming Stone: On the Coming-into-Being of Fossils in the American West” (Anthropology Quarterly 93(3):461-496). This article is a down-to-earth examination of a few crucial moments in the formation of Triceratops skull fossils that draws from Shever’s anthropological/paleontological fieldwork at a quarry in the Dakota Badlands and at a laboratory in Denver, Colorado. It exposes how fossils come into being through the mixing of biological and geological forces, tools and glues, and people’s somatic and intellectual labors. This article fuses insights from the anthropology of resource extraction and a post-humanist analytic of material vibrancy in order to rethink making in more-than-human terms. Yet it also draws attention to the neglected political economy of more-than-human making by demonstrating both the asymmetric collaborations among the human and nonhuman forces, and the importance of upper-class philanthropists’ capital and middle-class volunteers’ labor, in the coming-into-being of fossils.

The book has been reviewed in:

"Engendering the Company: Corporate Personhood and the 'Face' of an Oil Company in Metropolitan Buenos Aires," Political and Legal Anthropology Review, 2010, 33(1).