In 1665, a bolt of fabric carries the plague from London to a tiny village in the Peak District. The tragedy that ensues produces unlikely heroes and healers, among them a housemaid named Anna Frith. 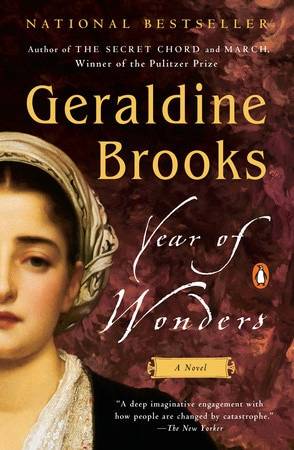 Inspired by the true story of a village in Derbyshire, England, Year of Wonders unfolds from the point of view of Anna, a young housemaid and shepherdess who is recently widowed and the mother of young boys. She is employed in the home of a charismatic new minister and his otherworldly wife, who teaches Anna to read and write.

In thrall to progressive ideas from his time at Cambridge, the minister persuades the villagers to seal themselves off from the outside world until the plague runs its course. Not a single household in the village is spared; in some cases, entire families succumb. Bonds between the living fray, and faith is in short supply.

To make sense of the horror and chaos, some villagers resort to superstition, theft, rape, and murder. Others, like Anna, dig deep to find reserves of strength they never knew they had.

A 20-year-old novel about events that happened more than three centuries ago resonates with the COVID-19 pandemic of today. The characters in Geraldine Brooks’ first novel wonder if the plague will ever end, who will survive, and whether it will change their lives forever.

Born and raised in Australia, Geraldine Brooks had a distinguished career as a foreign correspondent before turning, with Year of Wonders, to fiction-writing. The novel appeared in the summer of 2001, weeks before 9/11. Her second novel, March, won the Pulitzer Prize in 2006. Her other works include The Secret Chord, Caleb’s Crossing, People of the Book, Nine Parts of Desire, Foreign Correspondence, and The Idea of Home.

Listen to Jennifer Brice, associate professor of English, in conversation with the author as well her colleagues.

Brian W. Casey was inaugurated as Colgate's 17th president in 2016. After starting a career in law, Casey transitioned to higher education after earning a PhD from Harvard University in the history of American civilization, focusing specifically on the history of American higher education and American intellectual history. At Colgate, Casey is refocusing a commitment to Colgate's core identity: academic excellence and an immersive residential program in the liberal arts, preparing Colgate's students for well-rounded lives and careers.

Jane Pinchin’s publications include Alexandria Still: Forster, Durrell, and Cavafy. Among her many roles at Colgate University were provost and dean of the faculty as well as interim president. She received an honorary degree from this university at the May 2018 commencement. In 2019, a new dormitory, Jane Pinchin Hall, was named in her honor. She is now the Thomas A. Bartlett Professor Emerita in the Department of English. She serves on the Board of Trustees of Bowdoin College.

Alan Cooper is an associate professor of History at Colgate University.  He works mainly on eleventh- and twelfth-century England, focusing on the cultural history of law and power.  His publications include Bridges, Law and Power in Medieval England, 700–1400, and articles in the English Historical Review, the Journal of Medieval History, and Anglo-Norman Studies.  He is currently working on a book about William FitzOsbert, a traumatised crusader turned doomed revolutionary, and a novel set against the backdrop of the First Crusade.

Frank Frey is a professor of Biology and Environmental Studies at Colgate University. His teaching specialties include biostatistics, evolutionary biology, and global environmental health. He has published in journals including American Naturalist, BMC Complementary and Alternative Medicine, Evolution, International Journal of Geographic Information Science, International Journal of Plant Sciences, and Plant Species Biology. He has spent over a decade working in partnership with Bwindi Community Hospital in southwestern Uganda, and is currently investigating, along with Prof. Peter Scull and BCH collaborators, the emergence of antibiotic resistance in bacteria that cause upper respiratory infections in U5 children in the region.

Nimanthi Perera-Rajasingham is an associate professor of English and Women's Studies at Colgate University. Her book is titled Assembling Ethnicities in Neoliberal Times: Ethnographic Fictions and Sri Lanka's War. She has published in journals such as Research in African Literatures, South Asian Review, Contemporary South Asia, and Truthout.

Carina Haden ’21 is a senior English major and Art & Art History minor from Whitesboro, New York. This is her second year working with Professor Brice on the Living Writers program. Her favorite read from the 2019 list was How to Write an Autobiographical Novel by Alexander Chee, and her favorite author visit was Justin Torres for his book, We the Animals.

Kathrine Roell ’21 is a senior from Manchester, New Hampshire, studying both English Literature and French. This is her second year as a research assistant with Living Writers, and she is excited to be engaging with such an exciting group of texts and authors. This year, she is most looking forward to reading  Charles Yu’s novel Interior Chinatown. Last year her favorite Living Writers’ work was John Banville’s The Sea.

Tell us what you think about Year of Wonders!

For if we could be allowed to see the Plague as a thing in Nature merely, we did not have to trouble about some grand celestial design that had to be completed before the disease could abate.

Living Writers is put on by the Department of English at Colgate University with generous support from the Olive B. O'Connor Fund as well as the President and Provost/Dean of the Faculty.